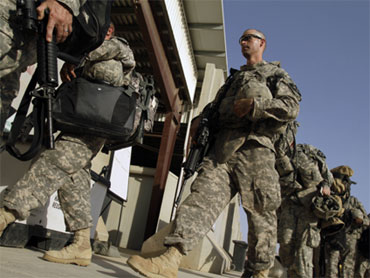 U.S. officials close to the Obama administration's Iraq planning have told the New York Times that a swarm of civilian diplomatic and security workers will soon be faced with the daunting task of keeping both themselves and the Iraqi people safe, as American troops prepare to leave the still-fragile democracy behind.

The last U.S. combat brigade marched out of Iraq Wednesday, crossing the border into Kuwait and cheering their impending voyages home while posing for group photos.

Only 50,000 American soldiers are to remain in the country -- mainly to keep training Iraqi security forces -- by the end of August. By the end of 2011, the Obama administration and its Iraqi counterparts aim to have all U.S. troops out of the country.

Iraq Withdrawal: What are Non-Combat Troops?

The officials who spoke to The Times, on condition of anonymity, said that as the Pentagon pulls out of Iraq, the State Department is going in -- in force. A White House source told the newspaper a contingent of about 2,400 Department staff would fill offices at the sprawling U.S. Embassy in Baghdad and four additional fortified compounds spread out across the country.

To protect those American staffers, and to form smaller "quick reaction forces," which the sources said would be used to come to the aid of Iraqi civilians caught in dangerous situations (there was no further explanation), State will bring with it into Iraq a small army of its own civilian defense contractors. The plans, which have been drawn up over many months, call for a force of between 6,000 and 7,000 of the controversial hired guns.

Many of them are to takeover tasks currently performed by American troops; most notably, the training of Iraqi police. They will also provide security at the diplomatic compounds, man checkpoints in the country's factitious north, and act as security guards for traveling State Department staff.

The Times report says the State Department has an impressive shopping list to prepare for its huge new role in Iraq, including:

Some former U.S. officials, both military and civilian, urge the Obama administration to use caution as it transitions from American military might to American diplomatic muscle in Iraq.

"We need strategic patience here," former U.S. Ambassador to Iraq Ryan C. Crocker told The New York Times. "Our timetables are getting out ahead of Iraqi reality. We do have an Iraqi partner in this. We certainly are not the ones making unilateral decisions anymore. But if they come to us later on this year requesting that we jointly relook at the post-2011 period, it is going to be in our strategic interest to be responsive."