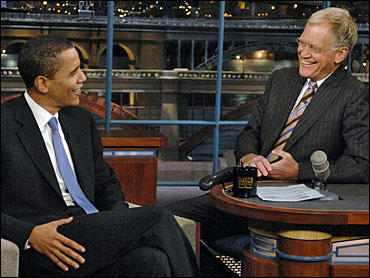 Barack Obama is not interested in running for vice president.

The Democratic presidential hopeful made that clear during an appearance Monday on CBS' "Late Show With David Letterman." Letterman asked Obama if there had been any discussion of the Illinois senator sharing the Democratic ticket with New York Sen. Hillary Rodham Clinton.

Letterman offered that a Clinton-Obama combination "would be a powerful ticket," to which Obama replied: "Which order are we talking about?"

Obama also told Letterman that his family is holding up well on the campaign trail.

"I take my kids occasionally," he said. "Malia, who's 8, Sasha, who's 5 — we take them on the campaign trail and they see these big crowds. I ask them sometimes, 'How's it going?' and the last time I did that, my 8-year old turned to me and said, 'This is terrific, daddy, but what are we doing here again?'

Still, Obama said: "I'm not getting back to Chicago very often. ... My wife is starting to refer to me as her first husband. It's a little disturbing."

Meanwhile, Obama and Clinton will give voters several chances this primary season to see if they would be a good fit together, agreeing to participate in six debates sanctioned by the Democratic National Committee, aides for both campaigns said Monday.

However, the aides added that neither candidate will appear in a Democratic debate co-hosted by Fox News Channel this fall.

The decision by the two Democratic presidential candidates follows an announcement last week by John Edwards, another White House contender, that he would forgo the Fox event.

The Sept. 23 debate, set for Detroit, is co-sponsored by the cable news network and by the Congressional Black Caucus Political Education and Leadership Institute.

Without Obama, Clinton and Edwards, however, Fox and the CBC institute would be missing three of the marquee contenders for the Democratic presidential nomination.

A spokesman for Obama, who is a member of the Congressional Black Caucus, made it clear that Obama intended to participate in a debate co-sponsored by the CBC Institute and CNN.

The Clinton campaign announced its intentions Monday after Obama had let it be known he would not be attending the Fox debate.

"Were going to participate in the DNC-sanctioned debates only," Clinton spokesman Phil Singer said. He added that Clinton already had commitments to participate in an upcoming debate in South Carolina and one hosted by Tavis Smiley, the PBS late-night talk show host.

Democrats have been under pressure from liberal activists to avoid Fox-hosted debates. Last month, the Nevada Democratic Party canceled a debate that Fox was to co-sponsor in August.