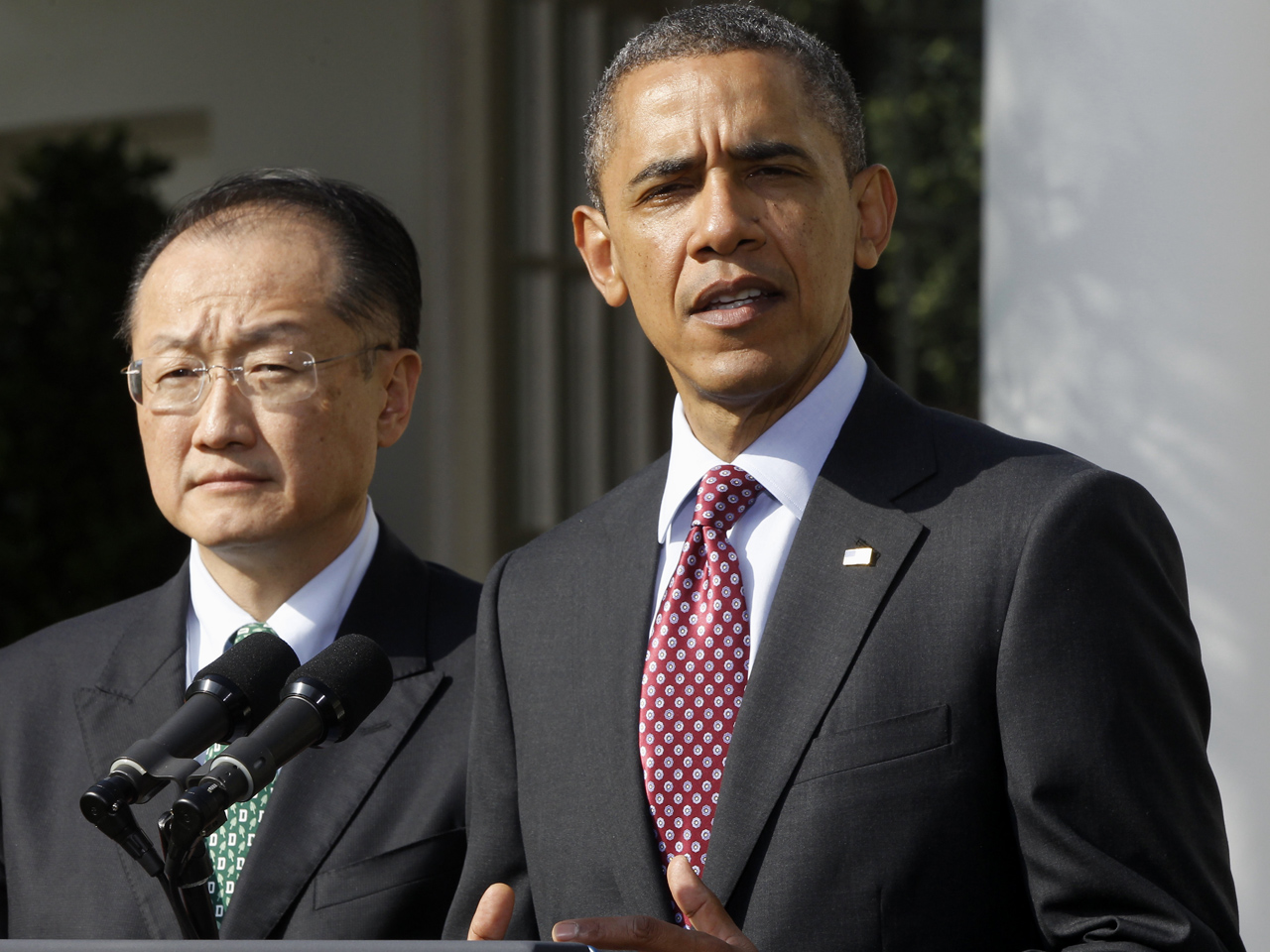 The Korean-born Kim is a physician by training and a prominent figure in global health and development circles. Officials believe his experience will help counter criticism from developing countries that have grown weary of the U.S. stranglehold on the World Bank presidency.

"Jim has spent more than two decades working to improve conditions in developing countries around the world," Obama said in announcing Kim's nomination during a White House Rose Garden event. "The World Bank is one of the most powerful tools we have to reduce poverty and raise standards of living around the globe, and Jim's personal experience and years of service make him an ideal candidate for this job... . It is time for a development professional to lead the world's largest development agency."

Obama took a strong personal interest in filling the World Bank vacancy after current president Robert Zoellick announced in February he was stepping down. Obama and his advisers considered more than a dozen candidates, including well-known figures in the administration. But in the end, officials said, Obama pushed for a nominee with broad development experience and was particularly drawn to Kim's innovative work fighting the spread of AIDS and tuberculosis.

"Jim has truly global experience. He has worked from Asia to Africa to the Americas, from capitals to small villages. His personal story exemplifies the great diversity to our country," Obama said Friday.

The 187-nation World Bank focuses on fighting poverty and promoting development. It is a leading source of development loans for countries seeking financing to build dams, roads and other infrastructure projects.

Obama was joined in the Rose Garden announcement by Kim as well as Treasury Secretary Timothy Geithner, a Dartmouth alumnus, and Secretary of State Hillary Rodham Clinton, who officials said was the first to recommend Kim for the job.

Former President Bill Clinton also weighed in with support for Kim during Obama's deliberations. In a statement, the former president applauded Kim's nomination. "Jim Kim is an inspired and outstanding choice to lead the World Bank based on his years of commitment and leadership to development and particularly health care and AIDS treatment across the world," he said.

While U.S. and European officials have voiced support for those efforts, the status quo remains, with France's Christine Lagarde holding the top spot at the IMF and Kim's candidacy for World Bank president all but certain to prevail.

After Zoellick announced that he planned to leave the bank, some observers speculated that the Obama administration might be open to backing a non-American to lead the organization. But Simon Johnson, a professor of economics at MIT Sloan School of Management and the former chief economist for the International Monetary Fund, expressed skepticism that such a plan was ever seriously considered.

"I think they wanted to keep it for an American, the other obvious American candidates either didn't want the job or were too contentious," Johnson said, adding that Kim's strong credentials on international health issues should deflect criticism about the post going to an American. "So this is a nice bit of lateral thinking -- propose someone who's very strong and can draw a lot of support from around the world, and someone who can refocus the World Bank... in ways that make sense."

The actual selection will be made next month by the World Bank's 25-member executive board. The United States, as the world's largest economy, has the largest percentage of the votes.

Developing nations are expected to put forward as many as three candidates, including Jose Antonio Ocampo, a Columbia University professor who had been finance minister for Colombia, and Ngozi Okonjo-Iweala, Nigeria's finance minister.

Economist Jeffrey Sachs, the director of Columbia University's Earth Institute, has openly campaigned for the World Bank post, saying the position should be filled by an expert in development issues. But a spokeswoman for Sachs confirmed that he is withdrawing his candidacy. In a statement, Sachs said he supports the White House's nomination of Kim and called him a "superb nominee" for the role.

Obama administration officials said the pick was already being well-received in the developing world. After learning of Kim's nomination, Rwandan President Paul Kagame said the physician was "a true friend of Africa" and "a leader who knows what it takes to address poverty."

Kim is expected to travel around the world on a listening tour to rally support for his nomination ahead of the World Bank vote.

The World Bank opening put Obama in the awkward position of choosing between his desire to be seen as a supporter of rising economic powers and the pressures of a political year in which support for a non-U.S. candidate could have opened him to criticism.

"If the administration had pushed a non-American for the job, this could have been attacked as Obama fostering the decline of American influence in the world," said former IMF official Eswar Prasad, now an economics professor at Cornell University. "In an election year, Obama would have been accused of caving in to outside pressures and not being willing to protect U.S. interests."

Others mentioned for the World Bank post included Indra Nooyi, the head of soft drink company PepsiCo, and Laura D'Andrea Tyson, who served in top economic jobs in the Clinton administration.

Mark Weisbrot, co-director of the Center for Economic and Policy Research, a Washington think-tank, praised Obama's nomination of Kim. "This is a huge step forward," Weisbrot said in a statement, highlighting Kim's work to co-found global health advocacy organization Partners in Health. "If Kim becomes World Bank president, he'll be the first qualified president in 68 years. Kim's nomination is a victory for all the people, organizations, and governments that stood up to the Obama administration and demanded an open, merit-based process."

Kim was born in Seoul, South Korea, and moved to the U.S. at age 5. He is a graduate of Brown University and Harvard University. He co-founded the global health organization Partners in Health and served as director of the World Health Organization's department of HIV/AIDS. In that role, Kim spearheaded an initiative to treat 3 million patients with HIV. He was elected to the National Academy of Sciences' Institute of Medicine in 2004.

He began his tenure as president of Dartmouth in 2009, becoming the first Asian-American to lead an Ivy League institution.