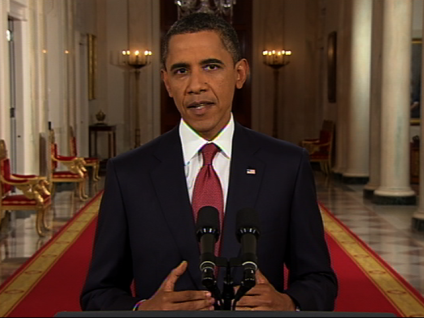 With just eight days left before a possible economic catastrophe, President Obama on Monday took his argument for a "balanced" debt limit agreement to the American people, arguing in a prime  time address that voters should call their members of Congress in support of a deal that "asks everyone to give a little without requiring anyone to sacrifice too much."

Speaking from the White House, the president lambasted Republicans for what he cast as a refusal to compromise, arguing that the nation faces a possible "deep economic crisis -- one caused almost entirely by Washington."

"Republican House members have essentially said that the only way they'll vote to prevent America's first-ever default is if the rest of us agree to their deep, spending cuts-only approach," Mr. Obama said. "If that happens, and we default, we would not have enough money to pay all of our bills - bills that include monthly Social Security checks, veterans' benefits, and the government contracts we've signed with thousands of businesses."

"It is a dangerous game we've never played before, and we can't afford to play it now," he warned. "People are fed up with a town where compromise has become a dirty word."

Mr. Obama continued to ask Republicans to accept revenue increases for the wealthiest Americans, saying they and large corporations should "give up some of their tax breaks and special deductions."

Arguing that Republican leaders were acting outside of the interests of their constituents, Mr. Obama called on voters to "make your voice heard."

"The American people may have voted for divided government, but they didn't vote for a dysfunctional government," he said. "So I'm asking you all to make your voice heard. If you want a balanced approach to reducing the deficit, let your Member of Congress know. If you believe we can solve this problem through compromise, send that message."

Invoking the words of former President Ronald Reagan, Mr. Obama asked Americans to consider the two sides of the argument: "Would you rather reduce deficits and interest rates by raising revenue from those who are not now paying their fair share, or would you rather accept larger budget deficits, higher interest rates, and higher unemployment? And I think I know your answer."

House Speaker John Boehner, responding in a nationally televised statementdirectly following the president's, accused Mr. Obama of creating a "crisis atmosphere" over the debt limit negotiations, and challenged him to sign a recently-unveiled two-step GOP plan.

"Obviously, I expect that bill can and will pass the Senate and be sent to the president for a signature," Boehner said. "If the president signs it, the crisis atmosphere he has created will simply disappear."

"You see, there's no stalemate in Congress," Boehner argued. "The House passed a bill to raise the debt limit with bipartisan support, and this week while the Senate is struggling to pass a bill filled with phony accounting and Washington gimmicks, we're going to pass another bill, one developed in support of the Washington leadership of the U.S. Senate."

The speaker left out some important context, however.

The bill that has already passed - the 'Cut, Cap, and Balance' Act - would require deep cuts in entitlement programs, and it is virtually unthinkable that it could pass the Democrat-led Senate. And the bill he says will be passed this week is no sure thing, with Conservative Republican Study Committee Chairman Jim Jordan, leader of a fiscal conservative faction, saying he opposes the new bill and that "only a Balanced Budget Amendment will actually solve our debt problems."

"The sad truth is the president wanted a blank check six months ago and wants a blank check today," Boehner added. "That is just not going to happen."

Boehner said in his remarks that "the United States cannot default on its debt obligations," echoing Mr. Obama and Democrats' insistence that the debt limit be raised. But he cast the president and his party as unwilling to compromise by passing the House GOP legislation, saying "the president would not take yes for an answer."

"Even when we thought we might be close on an agreement, the president's demands changed," Boehner said, a possible reference to Mr. Obama's call for greater revenues as part of a "grand bargain" deal that would have reduced the deficit by up to $4 trillion. Boehner walked away from that effort Friday.

Senate Democrats on Monday unveiled a plan that would cut spending by $2.7 trillion in exchange for an increase to the debt limit that would last through the end of next year. The plan circumvents the main objections to a deal from the left and the right by both avoiding cuts to entitlement programs and declining to include revenue increases.

The proposal includes $1 trillion in reductions tied to spending cuts from winding down the cost of the wars in Iraq and Afghanistan, however - something critics say should not count in the total savings.

Other savings in the Democratic plan would come from a $1.2 trillion reduction in both defense and non-defense discretionary spending, interest savings worth $400 billion, and savings of $100 billion largely through reducing fraud and abuse in government programs, cutting $10-$15 billion in agriculture subsidies and saving $30 billion in Fannie Mae/Freddie Mac reforms. The plan would also create a bipartisan committee to seek out future savings.

Mr. Obama called that plan a "much better approach" than a Republican alternative, but, somewhat surprisingly at this late stage in the debate, he essentially called for a reset to the sort of "grand bargain" approach he had previously pushed, one that included both entitlement cuts and revenue increases. That plan, he said, would "reduce the deficit by around $4 trillion and put us on a path to pay down our debt."

"I have told leaders of both parties that they must come up with a fair compromise in the next few days that can pass both houses of Congress - and a compromise I can sign," he said. "And I am confident we can reach this compromise."

The Democratic proposal amounts to a punt on that "grand bargain" sought by Mr. Obama. After Boehner abandoned those negotiations on Friday, Republicans and Democrats worked separately over the weekend in efforts to craft an alternate deal.

The Republican plan, unveiled by House GOP leaders on Monday, mandates immediate cuts and caps in discretionary spending, potentially saving $1.2 trillion over a decade. In exchange, the debt ceiling would be raised by less than $1 trillion, enough to last the nation through the end of the year. The spending caps would trigger automatic across-the-board spending cuts if not met.

The GOP plan then creates a 12-member "Joint Committee of Congress" that would additionally identify $1.6 to $1.8 trillion in deficit reduction over a decade. The House and Senate would consider those savings in an up-and-down vote, without amendments. If the plan passes, President Obama could then request a separate, $1.6 trillion debt limit increase.

During a closed-door meeting with his caucus Monday, Boehner suggested that Democrats lack the votes to pass the Reid plan. He said the GOP plan has the necessary votes, by contrast, and that the president will thus be forced to sign it. Boehner also called on his caucus to stick together to achieve Republican goals.

Democrats call the House Republican plan a "non-starter" because it would require another debt limit fight before the end of next year.

"Does anyone think it would be a good idea to do this all over again in six months?" Sen. Charles Schumer of New York said Monday.

Senate Majority Leader Harry Reid, in unveiling the Senate Democratic plan, called on Republican leaders to buck conservative "extremists" and rally behind his plan. Schumer said Republicans "can't refuse" the offer, since it reflected spending cuts Republicans have backed and did not include revenue increases.

"If they refuse this offer, it simply means they want a default, for any reason," said Schumer.

The Obama administration has said that without congressional action, the U.S. will breach its limit on borrowing next Tuesday, August 2. That could cause the U.S. to default on its debt as well as a host of other negative outcomes, including the suspension of Social Security checks, military pay and other obligations, and potentially cause global financial chaos.

Credit ratings agencies have warned that they are poised to withdraw the United States' triple-A credit rating without guarantees that it will not default, and they have also suggested that the credit rating is in danger without a significant deficit reduction effort. That would potentially mean an increase in the cost of borrowing both for the U.S. government and for Americans seeking home and car loans and a higher interest rate for those seeking to pay off credit card debt.