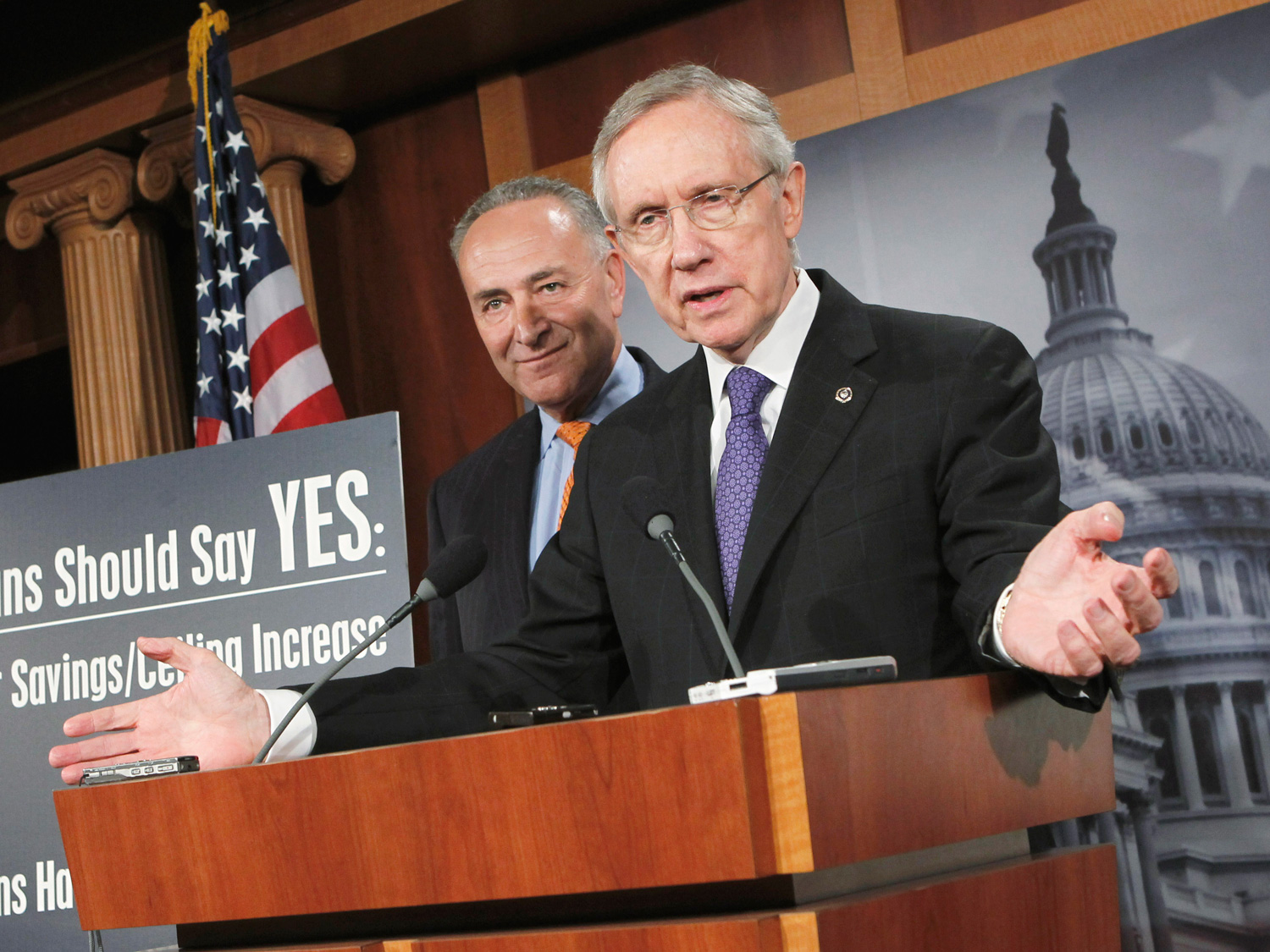 Senate Democrats unveiled a plan to raise the debt ceiling Monday that abandoned President Obama's call for revenue increases as part of a deal, putting forth a plan they said would cut spending by $2.7 trillion.

The Democratic plan, which would increase the debt ceiling through the end of next year, would include a $1.2 trillion reduction in both defense and non-defense discretionary spending. It also counts $1 trillion in spending cuts from winding down the cost of the wars in Iraq and Afghanistan, something critics say should not count in the total savings.

Senate Majority Leader Harry Reid, joined by Schumer, unveiled the plan Monday afternoon in a combative news conference in which they ruled out a rival plan from House Republicans that would create a two-step process for a debt limit increase.

"Republicans' short-term plan is a non-starter in the Senate, and in the White House," Reid said. Schumer called the plan a "dodge," adding, "Does anyone think it would be a good idea to do this all over again in six months?" Both Democrats quoted financial analysts suggesting a short-term extension could result in a downgrade in the U.S. credit rating.

House Republicans formally unveiled their plan late Monday afternoon. It mandates immediate cuts and caps in discretionary spending, potentially saving $1.2 trillion over a decade. In exchange, the debt ceiling would be raised by less than $1 trillion, enough to last the nation through the end of the year. The as-yet-unspecified spending caps would trigger automatic across-the-board spending cuts if not met.

The GOP plan then creates a 12-member "Joint Committee of Congress" that would additionally identify $1.6 to $1.8 trillion in deficit reduction over a decade. The House and Senate would consider those savings in an up-and-down vote, without amendments. If the plan passes, President Obama could then request a separate, $1.6 trillion debt limit increase.

"I think it would be irresponsible for the president to veto such legislation because it is a commonsense plan and it would avoid default," Boehner said at a press conference shortly after the Democrats unveiled their plan. Rep. Kevin McCarthy said the time had come for President Obama to start "putting people over politics."

During a closed-door meeting with his caucus Monday, Boehner suggested the votes are not there to pass the Reid plan. He said the GOP plan has the necessary votes and that the president will thus be forced to sign it. Boehner also called on his caucus to stick together to achieve Republican goals.

"Both plans represent typical Washington answers to the federal government's out-of-control spending problem," he said. "They add trillions to the national debt in the short-term while making hollow promises to cut spending in the long-term. Neither of the proposals fundamentally reform the way Washington spends money, require the federal government to balance its budget, or protect our triple-A credit rating."

Schumer and Reid decried the GOP plan as a time-waster during their press conference, saying it had no chance to pass the Senate. Reid said the GOP is "being driven by the radical right-wing that is so in tune with the Tea Party," and suggested that rank-and-file House Republicans "want their leaders to ignore the American people." The Republican leadership, he argued, needs "to break away from those extremists who seem to be running the Republican party in Washington."

"Republicans are more interested in trying to embarrass the president than doing what's right for the country," added the Senate majority leader. (See video above.)

At his appearance Thursday afternoon, Boehner said the Senate Democrats' plan is "full of gimicks" and doesn't make "any real changes in the spending structure of our government." He added that "it doesn't deal with the biggest drivers of our deficit and debt, and that would be entitlement programs."

The Democratic plan would not make cuts to Social Security, Medicare and Medicaid, unlike the so-called "grand bargain" proposed by the White House that would also have included revenue increases. It would save an additional $400 billion through interest savings, both from discretionary spending cuts and winding down the wars, and create a bipartisan committee to seek out future savings. It would also save $100 billion largely through reducing fraud and abuse in government programs, cutting $10-$15 billion in agriculture subsidies and saving $30 billion in Fannie Mae/Freddie Mac reforms.

Schumer acknowledged that the plan left difficult choices on revenue increases and entitlement reform to another time, but he said the "hard decision" to put forth the plan was necessary because of the August 2 deadline to increase the debt limit and the GOP unwillingness to compromise.

"In the interest of preventing a default we can have a fight on revenues later," Schumer said. Both he and Reid said Republicans would have no excuse if they oppose the plan, since it was made up solely of spending cuts they had previously supported.

"If they refuse this offer, it simply means they want a default, for any reason," Schumer said.

In a statement released immediately after the press conference, the White House said it backed the plan.

"Senator Reid's plan is a reasonable approach that should receive the support of both parties, and we hope the House Republicans will agree to this plan so that America can avoid defaulting on our obligations for the first time in our history," said Press Secretary Jay Carney. "The ball is in their court."

The White House announced late Monday that Mr. Obama would address the nation Monday evening at 9 p.m. Eastern to discuss the effort to reach a deal.

The Obama administration has said that without congressional action, the U.S. will breach its limit on borrowing next Tuesday, August 2. That could cause the U.S. to default on its debt as well as a host of other negative outcomes, including the suspension of Social Security checks, military pay and other obligations, and could potentially cause global financial chaos.

Credit ratings agencies have warned that they are poised to withdraw the United States' triple-A credit rating without guarantees that it will not default, and they have also suggested that the credit rating is in danger without a significant deficit reduction effort. A lowered rating could potentially mean an increase in the cost of borrowing both for the U.S. government and for Americans seeking home and car loans and those seeking to pay off credit card debt.