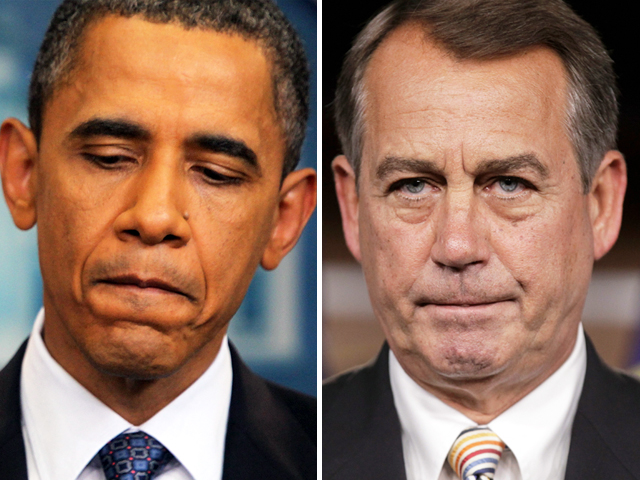 House Speaker John Boehner walked away from negotiations Friday, complaining that Mr. Obama would not agree to Republican demands that the deal not include any tax increases. Shortly after Boehner made his decision public, Mr. Obama, appearing frustrated, appeared before reporters to explain what had been on the table and hammer Boehner for walking away from an "extraordinarily fair deal."

The deal on the table, as Mr. Obama laid it out, included more than $1 trillion in cuts to domestic and defense discretionary spending, as well as $650 billion in cuts to entitlement programs - Medicare, Medicaid and Social Security. He said he asked for approximately $1.2 trillion in revenue increases that he said would have come from eliminating loopholes and deductions and engaging in broad tax reform, not hiking tax rates.

The deal, he said, called for less in tax increases than the deal worked out by the bipartisan "Gang of Six" negotiators, while including as much in discretionary savings. He said if the deal was unbalanced, "it was unbalanced in the direction of not enough revenue."

Appearing after Mr. Obama spoke, Boehner suggested the president "moved the goalposts" during discussions. He said there had been a closed-door agreement to increase revenues $800 billion through tax reform, but that Mr. Obama then insisted on an additional $400 billion in tax increases over 10 years.

Asked how the deal could break down over $40 billion per year over 10 years, Boehner said the tax increases would have been on "the very people that we expect to invest in our economy and create jobs" -- presumably high-earners.

Mr. Obama at one point suggested he "couldn't get a phone call returned" from Boehner earlier in the day, and said that when it comes to a deal, "I've been left at the altar now a couple of times." (A senior White House official later said the deal Mr. Obama was still on the table.) He said he was unable to guarantee that Social Security checks and other obligations would go out after the August 2 deadline, and said the blame falls on House Republicans who have been unwilling to compromise to get a deal done.

Mr. Obama said he was calling Congressional leaders to the White House Saturday morning at 11 a.m. "to explain to me how we are going to avoid default," acknowledging that discussions were basically back to square one.

"What this came down to is there doesn't seem to be a capacity for them to say yes," Mr. Obama said.

"I think the challenge really has to do with the seeming inability, particularly in the House of Representatives, to arrive at any kind of position that compromises any of their ideological preferences," he said. "None. And you've heard it. I'm not making this up. I think there are a number of members of that caucus that have been very clear about that."

Asked what he would say to calm skittish markets, Mr. Obama said, "I remain confident that we will get an extension of the debt limit and we will not default," but he was less confident that the GOP will step up and deal with underlying debt and deficits "in a way that is fair." He said he would be willing to sign a debt limit increase that did not include deficit reduction measures if presented such a bill by Congress.

"I think it's very important that the leadership understands that Wall Street will be opening on Monday and we'd better have some answers during the course of the next several days," Mr. Obama said.

Boehner also said he was "convinced" there would be no default.  He said "absolutely not" when asked if he was pressured to walk away from the deal by his caucus.

"I gave the president's proposal serious consideration," he said. "Let's understand something. There was an agreement with the White House of $800 million in revenue. The president walked away from his agreement and demanded more money at the last minute."

The president earlier acknowledged that the Democratic leadership in Congress had not signed off on the proposed deal. He said, however, that both he and the leadership "were willing to engage in serious negotiations despite a lot of heat from a lot of interest groups around the country in order to make sure that we actually dealt with this problem."

Rumors of proposed cuts to entitlements had angered many Democrats and interest groups, and in announcing that he had offered $650 million in cuts on that front over 10 years, Mr. Obama said, "We believed that it was possible to shape those in a way that preserved the integrity of the system, made them available for the next generation and did not affect current beneficiaries in an adverse way."

"I was willing to try to persuade Democratic leadership as well as Democratic members of Congress that even a deal that is not as balanced as I think it should be, is better than no deal at all," he said. "And I was willing to persuade Democrats that getting a handle on debt and deficit reduction is important to Democrats just as much as it's important to Republicans. And, frankly, a lot of Democrats were persuaded by that."

The president and House speaker have been seeking a "grand bargain" of around $4 trillion in deficit reduction, but have faced stiff resistance from lawmakers in both parties. House Republicans say they will not accept revenue increases in the deal, while Democrats say any deal must include revenue increases as well as spending cuts.

Despite rumors of a deal in recent days -- the alleged contours of which fueled anger from lawmakers -- Boehner said in a letter to colleagues before Mr. Obama spoke that  "a deal was never reached, and was never really close."

Toward the end of his remarks, Mr. Obama grew particularly animated when he suggested that lawmakers were putting what "some funder says or what some talk radio host says or what some columnist says or what pledge we signed back when we were trying to run" ahead of the concerns of the American people. He called that attitude "inexcusable."

"You know, at some point I think if you -- if you want to be a leader, then you've got to lead," he said before leaving the podium.