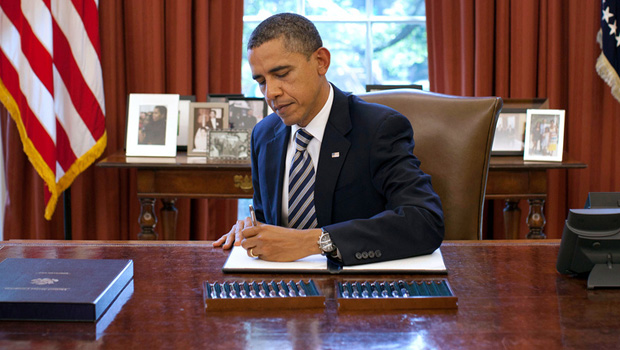 President Obama signed a hard-fought, last-minute compromise bill to avert economic catastrophe Tuesday, saying the deal to cut spending and increase the nation's $14.3 trillion debt limit marked an "important first step to ensuring that as a nation we live within our means."

The bill, he said, was the outcome of a "long and contentious debate" to avoid a man-made economic disaster that he described as creating "unsettling" economic uncertainty. He said that while voters chose divided government, "they sure didn't vote for dysfunctional government."

"It shouldn't take the risk of default, the risk of economic catastrophe, to get folks in this town to get together and do their jobs," the president said. He added: "Our economy didn't need Washington to come along with a manufactured crisis to make things worse."(watch Mr. Obama's full remarks at left)


Mr. Obama signed the legislation Tuesday afternoon after making remarks in the White House Rose Garden. It will effectively increase the nation's borrowing authority through the end of next year and promises more than $2 trillion in deficit reduction over ten years.

Now that the debt limit fight is effectively over, Mr. Obama and congressional Democrats say they will pivot to a focus on jobs and the economy, which they say should be Congress' top priority.

"We've got to do everything in our power to grow this economy and put Americans back to work," Mr. Obama said Tuesday. He called on Congress to extend middle class tax cuts and unemployment benefits, pass trade deals and plow money into infrastructure when it returns from its August recess.

The Obama administration had warned that if lawmakers did not act on the debt limit by midnight, the nation would no longer be able to pay many of its obligations - potentially including social security checks, military pay and other payments - and could default on its debt, causing worldwide economic chaos as well as increased borrowing costs for Americans.

The Senate passed the bill 74-26shortly before Mr. Obama made his remarks, easily surpassing the 60 votes needed to overcome a filibuster. That vote followed Monday night passage in the House, which included a surprise affirmative vote by Democratic Rep. Gabrielle Giffords, who is recovering from an assassination attempt.

Both fiscally-conservative Republicans and liberal Democrats rejected the deal, with the former saying it does not go far enough to address the nation's debt and deficit crisis and the latter complaining it cut too much and did not include revenue increases. Though the deal will reduce the deficit by trillions of dollars, it still leaves the nation facing a projected $22 trillion debt ten years from now - an increase of more than $7 trillion from today. Ratings agencies have said that they could still downgrade the nation's Triple-A credit rating even with the deal.

Mr. Obama had sought a "grand bargain" that would have included more than $4 trillion in deficit reduction and included both revenue increases, cuts to entitlement programs and tax reform. But against a backdrop of Republican opposition to any revenue increases and Democratic opposition to significant cuts to entitlements, closed-door negotiations over the larger deal broke down.

The bill will immediately increase the debt limit by roughly $400 billion immediately and then another $500 billion in the fall. It will also create a 12-person bipartisan congressional committee tasked with coming up with recommendations for $1.5 trillion in further deficit reductions by Thanksgiving. Those reductions could include cuts from defense spending and social safety net programs, as well as changes to the tax code.

If the recommendations are not created or approved by Congress by the end of the year, it will trigger more than $1 trillion in automatic spending cuts unless Congress sends a balanced budget amendment to the Constitution to the states.

Mr. Obama called on that committee to take a "balanced approach" -- one that includes revenue increases -- with "everything on the table."

"Yes, that means making some adjustments to protect health care programs like Medicare so they're there for future generations. It also means reforming our tax code so that the wealthiest Americans and biggest corporations pay their fair share," he said. "And it means getting rid of taxpayer subsidies to oil and gas companies and tax loopholes that help billionaires pay a lower tax rate than teachers and nurses."

In a statement, House Speaker John Boehner called passage of the bill "a positive step forward that begins to rein in federal spending, but it's only a step."

"We should save the celebration for when a Balanced Budget Amendment is ratified, the deficit is fixed, and our economy has returned to creating jobs," he said.

Senate Majority Leader Harry Reid said after the Senate vote that "Neither side got what they wanted."

"Each side laments some of the things we had to give up, but that's the way it is," he said.

Will U.S. credit rating be downgraded despite deal?
How The Debt Deal Impacts Your Retirement
Alain Sherter: The U.S. Is Repeating Europe's Mistakes