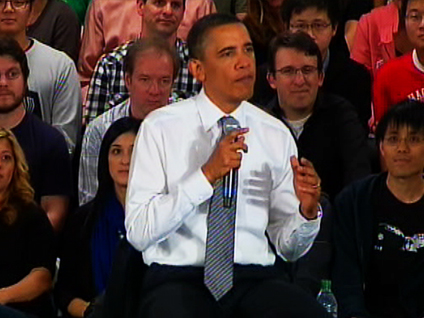 At a town hall Wednesday, President Obama said that one of the biggest questions he has had about his leadership as president was the slow pace of health care reform. Given how complicated the issue was, though, he added that he's not sure it could've moved any faster.

"Health care, obviously, was a huge battle," the president said at Facebook headquarters in Palo Alto, Calif. "I've asked myself sometimes is there a way we could've gotten it done more quickly and in a way that the American people hadn't gotten frustrated by."

Health care reform, however, has been one of the greatest challenges of the last century, he said, and couldn't be resolved overnight.

Mr. Obama made health care reform his first major priority as president, but he did not get to sign the landmark reforms into law until March 23, 2010 -- 14 months after he took office. The debate over his comprehensive health care package consisted of numerous congressional hearings, countless closed door meetings and backroom deals, and seemingly endless political grandstanding from both Democrats and Republicans.

"If it hadn't been for Nancy Pelosi and her leadership in the House... we wouldn't have gotten it down," Mr. Obama said, acknowledging the hard-fought battle Democrats waged against Republicans to pass the controversial reforms.

Mr. Obama acknowledged that the drawn out political fight may have caused the public to sour on his plan.

"I do think that it was so complicated that at a certain point people started saying, this is typical Washington bickering," he said.