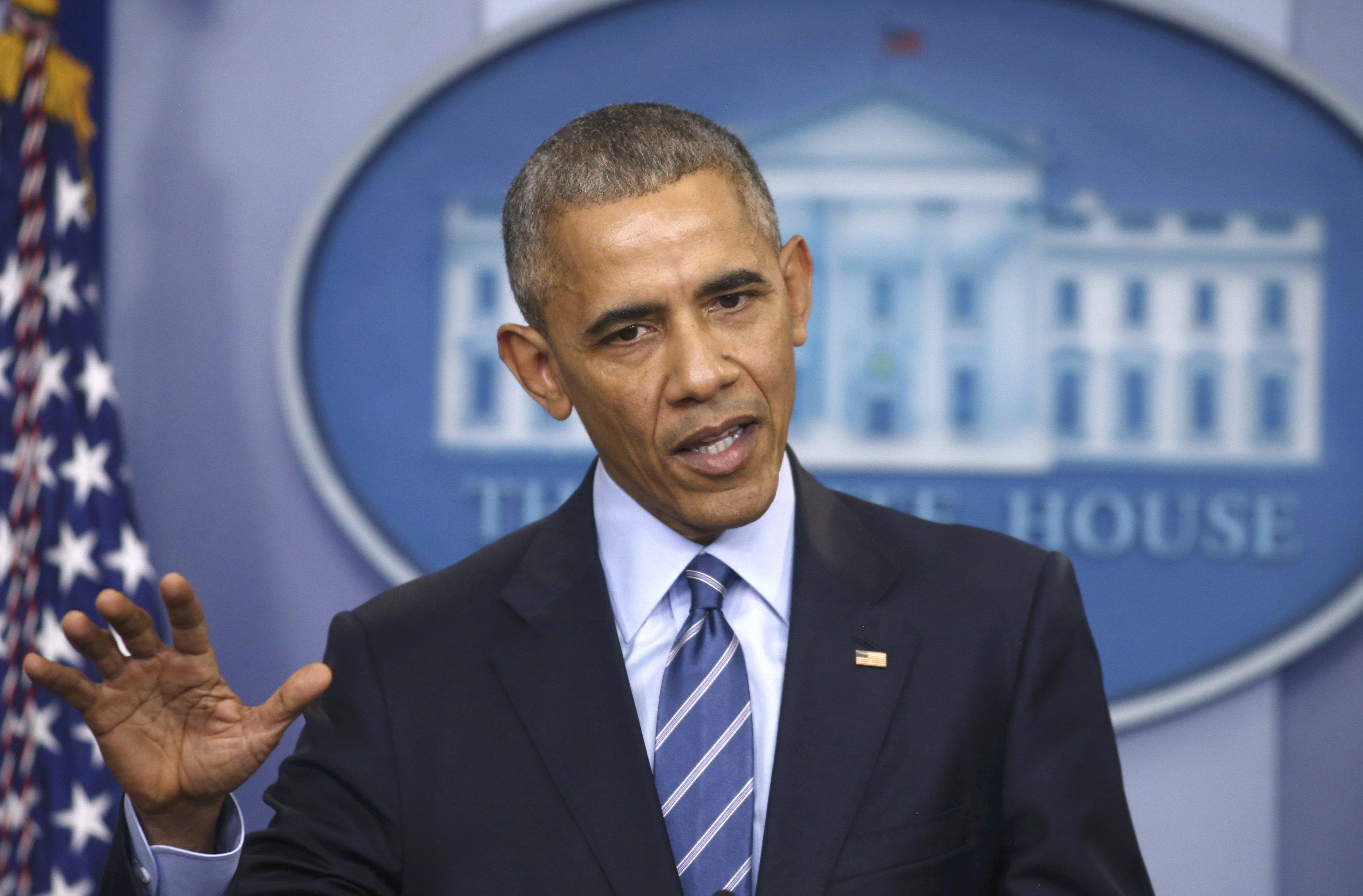 President Obama began his final end-of-year press conference by touting all of the achievements his administration has made over the last eight years and then told reporters that the White House handled Russian cyberattacks against the U.S. election in the right way.

Mr. Obama said that wages have grown over his two terms, Obamacare has provided healthcare insurance to thousands of Americans and it’s led to businesses creating millions of jobs. The president said he cut deficits by nearly two-thirds and he cut down the U.S. troop size overseas and Osama bin Laden has been killed.

Russian hacking of the U.S. election

The president was asked if he was prepared to call out Russian President Vladimir Putin by name for ordering a cyber attack against the U.S. election and whether he agrees with Hillary Clinton’s assertion that  Russian hacking contributed to her loss.

“Based on uniform intelligence assessments, the Russians were responsible for hacking the DNC and that as a consequence, it is important for us to review all elements of that and to make sure that we are preventing that kind of interference from cyber attacks in the future,” Mr. Obama said. “My hope is that the president-elect is going to be similarly concerned that we aren’t going to have foreign interference in our election process.”

The president then explained that the White House didn’t reveal what Russia’s motives were before the election or that the administration didn’t respond more forcefully because he didn’t want to contribute to the “hyper-partisan atmosphere.”

“I wanted to make sure that we were playing this thing straight...imagine if we had done the opposite...it would have become immediately just one more political scrum,” he said. “I think we handled it the way it should have been handled.”

Mr. Obama said that he pulled Putin aside at a conference in China in early September to tell him to “cut it out” and the president said the U.S. did not see further tampering of the election.

He was asked later on whether he would declassify evidence that proves Russia was responsible.

“We will provide evidence that we can safely provide that does not compromise sources and methods,” he said. “The way we catch folks is by knowing certain things about them that they may not want us to know.”

Pressed on whether he absolutely believed Putin authorized the hacks, Mr. Obama responded that “The intelligence that I’ve seen gives me great confidence in their assessment that the Russians carried out this hack - the hack of the DNC, and the hack of John Podesta.”

Evidence, he said, was provided in a closed session on a bipartisan basis to him and leaders of Congress, including the chairs and ranking members of relevant committees.

He added that the hack “happened at the highest level” of the Russian government, noting that “not much happens in Russia without Vladimir Putin.”

“This is a pretty hierarchical operation,” he said. “Last I checked, there’s not a lot of debate and democratic deliberation particularly when it comes to policies directed at the United States.”

When asked whether he believes Donald Trump’s social media responses to the reports on Russian hacking emboldened the Kremlin, the president urged some caution before criticizing his successor.

“I think the president elect is still in transition mode from campaign to governance,” he said. “There’s just a whole different attitude and vibe when you’re not in power as when you’re in power.”

Mr. Obama further called on the president-elect to choose a unifying path forward on the issue, saying it would be wise to “welcome a bipartisan process” of investigating the election to ensure the preservation of democracy’s cornerstone.

A senior administration official said this week that the U.S. has “high confidence” ‎that it was the G.R.U. -- Russia’s largest intelligence agency -- that conducted the hacking of the DNC and DCCC with the goal of giving an advantage to Donald Trump.  Further, officials say they are convinced that the hacking that plagued the DNC was approved by Putin. Sources confirmed to CBS News’ Jeff Pegues this week that they believe Putin was aware of attacks that began in July of last year.

In an interview with NPR that aired early Friday morning, the president said that “there is no doubt that when any foreign government tries to impact the integrity of our elections, that we need to take action and we will -- at a time and a place of our own choosing.” And “some of it may be...explicit and publicized,” he continued. “Some of it may not be.”

Future of the Democratic party

The president weighed in on the future of the Democratic party, urging liberals to expand their horizons -- even into red states -- when it comes to winning over voters.

“How do we make sure we are showing up in places where democratic policies are needed, where they’re helping?” Mr. Obama asked. He pointed to his own campaigns in the past and what he did to win them, saying he won his U.S. Senate seat in Illinois by “going to fish fries and sitting in VFW halls and talking to farmers.”

“I didn’t win every one of their votes, but they got a sense of who I was,” he said, noting that his own family’s history “wasn’t all that different from theirs even if I looked a little bit different.”

The president expressed regret that he was unable on the whole to transfer his own grassroots campaign success to down-ticket candidates, especially during midterms.

“That’s something that I would have liked to have done more of, but it’s kind of hard to do when you’re dealing with all kinds of issues” in the White House, he said.

Still, he added, “I could not be prouder of the coalition I put together in each of my campaigns, because it was inclusive.”

Asked to weigh in on the race for the Democratic National Committee (DNC) chair, where Labor Secretary Tom Perez is a contender, the president said he was glad he didn’t “have a vote in this.

He did, however, comment on some of the candidates, which he said were “also my friends and are fine people as well.”

Of Perez, Mr. Obama called him “one of the best secretaries of labor in our history.”

“He is tireless,” he said. He is wicked smart. He has been able to work across the spectrum of, you know, labor, business, activists. He has produced.”

“Whoever leads the DNC, and any candidate with the Democratic brand going forward, I want them to feel as if they can reach out and find that common ground,” he said.

Aleppo, Syria: “I cannot claim that we have been successful.”

Asked if he felt personally responsible for the atrocities in Aleppo, Syria during the country’s civil war, Mr. Obama said he has “always” felt responsible.

“Because of my office, because I’m president of the United States, I feel responsible,” he said, adding that the same applies for domestic issues as well as international conflicts.

Specifically on actions that can be taken in Syria, Mr. Obama said he has “taken the best course I can to try to end the civil war while having also to take into account the long-term national security interests of the United States.”

“I understand the impulse to want to do something” in Aleppo and Syria as a whole, the president said. “It sounded like the right thing to do -- but it was going to be impossible to do this on the cheap.”

At the same time, he said of the U.S. approach in Syria: “I cannot claim that we have been successful.”

On establishing a safe zone in Syria, the president said it would be very difficult to do.

“That requires some force that is willing to maintain that territory in the absence of consent from the Syrian government -- and now the Russians or the Iranians,” he said.

A free and fair election?

Mr. Obama was asked if he can assure the public that the election was “free and fair.”

“I can assure the public that there was not the kind of tampering with the voting process that was a concern and will continue to be a concern going forward,” Mr. Obama said. “We have not seen evidence of machines being tampered with. That assurance, I can provide.”

The president was asked if he’s concerned about Mr. Trump’s relationship with Putin and about his pick for secretary of state: Rex Tillerson.

“The Russians can’t change us or significantly weaken us,” he said, adding that the Russian economy doesn’t produce anything that consumers want except oil, gas and arms.

Mr. Obama then appeared to make a thinly veiled criticism of Mr. Trump. He said that Putin can weaken the U.S. if Americans buy into notions that “it’s okay to intimidate the press” or “lock up dissidents” or “discriminate against people because of their faith or what they look like.”

The president was asked if the “One China” policy needs a fresh set of eyes or whether Mr. Trump’s approach -- taking a call from Taiwan’s leader -- would set the U.S. on a collision course geopolitically.

“I’m somewhere in-between. I think all of our foreign policy should be subject to fresh eyes,” Mr. Obama said. “I think it should be not just the prerogative but obligation of a new president to examine what makes sense and what doesn’t.”

Mr. Obama said that there’s no bilateral relationship “that carries more significant” than between the U.S. and China. He said that Mr. Trump needs to understand what the consequences would be of up-ending the “One China” policy.

The president advised Mr. Trump broadly, “Across the board on foreign policy, you want to make sure that you are doing it in a systematic, deliberate and intentional way.”

Calling the Electoral College a “vestige” and a “carryover” from the time of the founding fathers, the president discussed the recent debate over electors and their usefulness.

“There are some structures in our political system as envisioned by the founders that sometimes are going to disadvantage Democrats,” he said. “But the truth of the matter is if we have a strong message if we’re speaking to what the American people care about, typically the popular vote and the Electoral College vote will align.”

When pressed on whether he would allow electors to receive an intelligence briefing before they gathered for a vote next week, Mr. Obama said that he would not wade into that issue.

“It is not my job to decide my successor,” he said. “I have provided people with a lot of information about what happened during the course of the election but more importantly, the candidates have talked about their beliefs and their vision for America.”