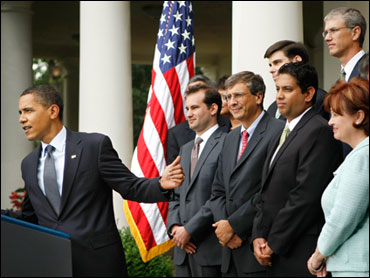 (AP Photo/Gerald Herbert)
President Obama has said on numerous occasions that he does not want to run banks, nor does he want to be an automaker CEO.

But perhaps he would like to get into the construction business?

The president on Thursday met with executives from a handful of businesses, nearly all of which help other companies save money through energy efficiencies.

"Energy is one of the pillars of this new (economic) foundation," Mr. Obama said after the meeting. "Even as we face tough economic times, the CEO's here told me they're looking to hire new people. In some cases, even double or triple over the next few years. These companies are the vivid example of some kind of future we can create."

Mr. Obama was about to end his brief remarks when he felt compelled to return to the podium to sing the virtues of energy-efficient construction. He ran through a list of ways to save money with new innovations: "Everything from LED lighting that can save a huge amount on energy costs, to new concrete materials that last longer... that are water-proofed from the inside out..."

The nation, he said, has not done enough to create a clean energy economy.

"What these folks are all about is the future," Mr. Obama said, referring to the executives.

He said he was "just talking to (Energy) Secretary Chu about how he is going to consult with these outstanding folks to figure out how we can improve energy efficiency here."

Earlier today, new government reports showed that 467,000 jobs were lost in June, which is more than what was expected. The unemployment rate was tagged at 9.5 percent, a 26-year high.

The president said today he is "confident we're not only going to recover but we're going to prosper in the long term."