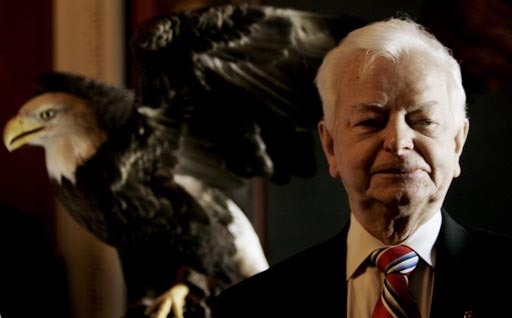 President Obama this afternoon signed a proclamation proclaiming that in honor of longtime Senator Robert C. Byrd, who died Monday, flags at the White House and public grounds will be flown at half-staff.

Read the proclamation: "I hereby order, by the authority vested in me by the Constitution and the laws of the United States of America, that the flag of the United States shall be flown at half-staff at the White House and upon all public buildings and grounds, at all military posts and naval stations, and on all naval vessels of the Federal Government in the District of Columbia and throughout the United States and its Territories and possessions until sunset on the day of his interment. I further direct that the flag shall be flown at half-staff for the same period at all United States embassies, legations, consular offices, and other facilities abroad, including all military facilities and naval vessels and stations."

Byrd, the longest serving senator in U.S. history, will be celebrated at a memorial service in West Virginia Friday attended by President Obama and Vice President Biden. His body will lie in the Senate chamber Thursday and he will be interred in Virginia Tuesday.