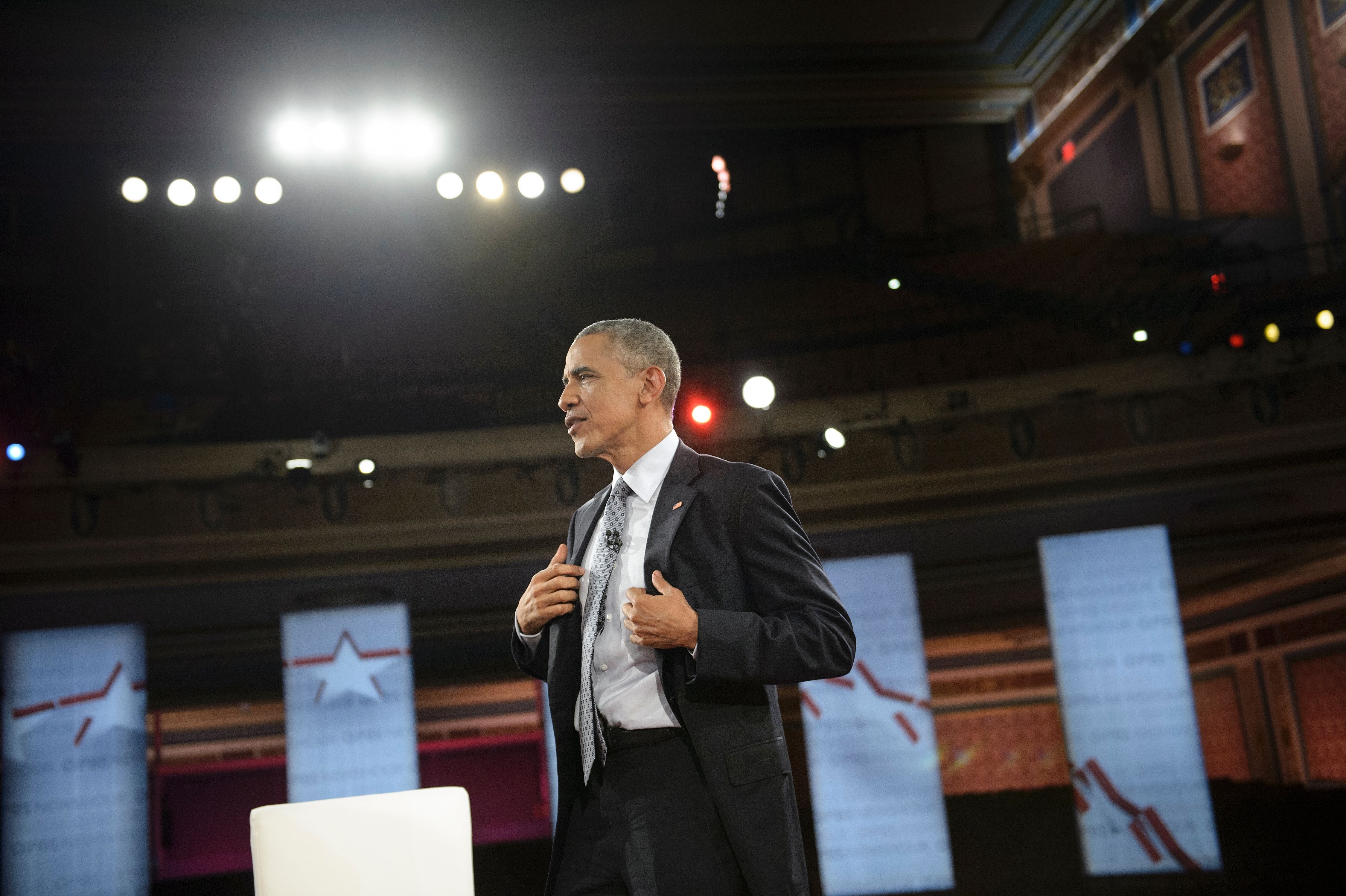 President Obama has offered up several scathing criticism of Donald Trump and his presidential platform over the last few weeks, labeling Trump's policies "crazy" and rooted in "ignorance." But even in those moments -- like in his ferocious attack on the billionaire's economic proposals Wednesday -- it's rare that the president ever utters Trump's name out loud, referring to him instead as "the Republican nominee."

In a new town hall interview with PBS News' Gwen Ifill Wednesday evening, the president provided an explanation: "You know he seems to do a good job mentioning his own name," Mr. Obama said to chuckles in the Elkhart, Indiana audience. "So, I figure, you know, I'll let him do his advertising for him."

The president also addressed the presumptive GOP nominee's popularity among American voters, attributing it in part to "the worst financial crisis of our lifetimes."

"I think it's safe to say that it's been the worst in the lifetimes or memories of most people here," Mr. Obama told Ifill. "Then you feel nervous. People lost homes, people lost savings, people were worried about whether or not they could make ends meet. And so even though we've recovered, people feel like the ground under their feet isn't quite as solid."

"In those circumstances," the president went on, "a lot of times it's easy for somebody to come up and say, you know, what if we deport all the immigrants and build a wall or if we cut off trade with China or if we do X or Y or Z -- that there's some simple answer and suddenly everything is going to feel secure."

Labeling Trump "a more colorful character" than other Republican elected officials, Mr. Obama nevertheless believes that the message he brings to the general election is the same one other party members have peddled in years past.

"A lot of the story that he's telling is entirely consistent with what folks have been saying about me, or the general story they've been telling about the economy, for the last seven and a half, the last ten, the last 20, the last 30 years," the president said.

Mr. Obama instead defended America's current economic state as having made great strides towards recovery.

"There are some long term trends in the economy that we have to tackle," the president said. "But the notion that somehow America is in decline is just not borne out by the facts."

Of Trump's promises to return manufacturing jobs to the United States, the president slammed the candidate's lack of specificity.

The president also addressed the issue of transgender bathrooms, which the White House tackled last month in a directive to schools around the country.

"Somehow people think that I made it an issue. I didn't make it an issue," he said at the town hall, adding that "there are a lot of things that are more pressing, you're absolutely right."

But he also backed up his administration's move, which allowed transgender students to use school bathrooms and locker rooms that match their gender identities.

"We should deal with this issue the same way we'd want it dealt with if it was our child," Mr. Obama said, citing the bullying and harassment that students suffer when they are transgender. "And that is to try and create an environment with some dignity and kindness for these kids."

"That's sort of the bottom line," he continued. "I have to just say what's in my heart. But I also have to look at what's in the law... The problem is just for a lot of these kids -- they might not even feel comfortable going to the bathroom, which is a tough situation if you're a kid."

Regarding his own party's increasingly tense primary race, the president predicted that the ongoing battle between Democratic front-runner Hillary Clinton and Vermont Sen. Bernie Sanders would soon wrap up.

"I think that there's been a healthy debate in the Democratic Party. And it's almost over," Mr. Obama said in the wide-ranging PBS interview. "What I've tried to do is to make sure that voters, rather than me bigfooting the situation, are deciding the outcome."

He expects that "we'll probably have a pretty good sense next week of who the nominee will end up being."

"I think both Bernie Sanders and Hillary Clinton are good people," he added. "I think that they broadly share the goals that I have. There are some tactical differences within the Democratic Party about how do you get stuff done. But there's going to be plenty of time for me to step in and campaign."