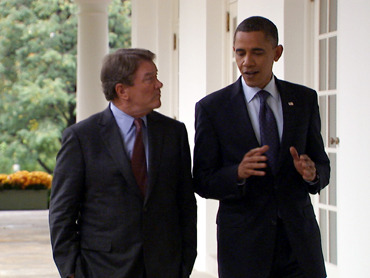 Days after the Republican Party regained the House majority, President Barack Obama tells "60 Minutes" correspondent Steve Kroft that there is now "a basis for a conversation" over extending the Bush tax cuts for the wealthy.

The sit-down with Kroft is the president's first one-on-one interview since the midterm elections, and will be broadcast tonight on CBS at 7 p.m. ET/PT.

Here's an excerpt of the exchange:

Steve Kroft: "Congressman Boehner is the next Speaker of the House, most likely. [He] offered you a compromise back in September. He suggested extending the tax break for the wealthiest for two more years and rolling back discretionary government spending to levels before the bailout in 2008. Is that something that you could live with?"

President Obama: "I think that when we start getting specific like that there's a basis for a conversation. I think that what that means is that ... we can look at what the budget projections are. We can think about what the economy needs right now, given that it's still weak.

"And hopefully, we can agree on a set of facts that leads to a compromise. But my number one priority coming into this is making sure that middle class families don't see their tax rates go up January 1."

Kroft: "Do you want to make a counter proposal to him right now?"

President Obama: "I think I've already invited them over to the White House."

In the interview Mr. Obama also said the defeat of his party in the midterm elections was probably because the people thought his emergency stimulus and bailout spending was "a huge expansion of government."