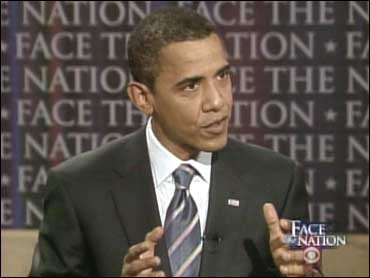 Democratic presidential candidate Barack Obama said that the looming credit crisis was an urgent situation for which action needs to be taken, but he wants to ensure that the $700 billion bailout package being crafted by the Bush administration and Congress does not amount to "welfare for Wall Street."

"My inclination is to support it, because I think Main Street is now at stake," he told Face The Nation host Bob Schieffer. He added, though, "I'm not happy about it."

"This [crisis] could affect every sector of the economy. If the credit crisis continues or worsens, then suddenly small business people can't make their payroll. You have large businesses who can't sell corporate debt, which could bring the entire economy to a grinding halt."

Obama was pleased that, at first reports, his basic goals for the package were included: "The issue of making sure that we had strong oversight; the insistence that taxpayers share in the gains (if there are any) when the market recovers; the insistence that homeowners get additional relief so that there's some reciprocity - if in fact we're bailing out or helping banks, they in turn have to help rework mortgages for people who are potentially facing foreclosure; and the final thing, the issue of executive compensation, making sure that taxpayer money is not going to pad bonuses or golden parachutes.

"It appears that those principles have all been incorporated into the core agreement. And I'm going to be reviewing the language over the next day to make sure that those provisions actually stick."

But beyond the bailout (which has reportedly been agreed to by Congressional leaders), Obama focused on how the U.S. economy came to the point of a president sounding the alarm that a catastrophe was in the offing if drastic action wasn't taken immediately. "We have to remember how we got here, not so much to allocate blame as to understand the choices that are going to face the next president. Unless we update our 20th century regulatory framework for a 21st century global financial system, then we're going to continue to be vulnerable to this kind of situation, and I think the next president has to come in with a very strong package of reforms."

Obama said fighting off lobbyists and special interests was key, as is recognizing that the fundamentals of our economy are not strong - which he suggested his opponent, Republican John McCain, has not recognized.

"Some of the root causes of this crisis have to do with the day-to-day struggles that ordinary people are going through," he said, "with flat wages and incomes but constantly increasing costs.

That puts pressure on them to take out more debt, to use home equity loans, to try to refinance. It created an environment in which this kind of crisis potentially could occur.

"We should have never gotten into this place in the first place. And I think this is a final verdict on eight years of failed economic policy."

Obama noted that the dire predictions of Treasury Secretary Henry Paulson, Federal Reserve chairman Ben Bernanke and President Bush set the stage for a week of high drama that, he said, shouldn't have ever happened. "Think about it. I mean, we had the largest bank failure in our history, and it wasn't even the major news that day!"

"You agree with the president's assessment that it's as serious as he said it was?" Schieffer asked.

"I agree that this is probably the most serious financial crisis we've faced since the Great Depression," Obama said. "And what we can't do is do nothing. What I absolutely insist on, though, is that the same sense of urgency that we have about Wall Street, we have about folks on Main Street who have been struggling for a long time."

Obama said more serious regulations are required. "We have to set up some rules of the road, some regulations that work to keep the system solvent, and prevent Wall Street from taking enormous risks with other people's money, figuring that, 'Tails I win, heads you lose,' where they don't have any risk on the downside.

"But the second thing that we have to learn is that, if you think about how this all started, subprime lending, you've got homeowners who ultimately could not make payments on their homes, and that's an indication of the degree to which family budgets have been under huge stress for years now, and we haven't been paying much attention about it because the theory has been, 'Well, as long as those at the top are doing well, prosperity somehow is going to trickle down.'"

In response to Thursday's meeting at the White House, attended by both Obama and McCain, at which the tentative brokered agreement was upset by House Republicans, prompting further tense negotiations, Schieffer asked Obama if McCain should get any credit for helping to get the bailout package settled.

"No," Obama said. "Look, here are the facts: For two weeks, I was on the phone every day with Secretary Paulson and the congressional leaders, making sure that the principles that have ultimately been adopted were incorporated into the bill. None [of the amendments in the package] were in the president's provision. They are identical to the things I called for the day that Secretary Paulson released his package. That, I think, is an indication of the degree to which, when it comes to protecting taxpayers, I was pushing very hard and involved in shaping those provisions.

"But understand this: The important thing here is making sure that we don't have a photo op session, because this is serious. We should not have been here in the first place. And, you know, I think the critical debate that we're going to have to have between myself and Senator McCain moving forward is, how do we prevent this kind of thing from happening again?"

In addition to the bailout, Obama discussed Friday's debate, where McCain accused Obama of "not understanding" something.

"The interesting thing is, he kept on asserting I didn't understand, but beyond saying the line never indicated what exactly I didn't understand. It's true I don't understand Senator McCain's positions on a whole host of issues, because given how the Bush administration has created an extraordinary crisis in the economy and considering that we remain bogged down in Iraq, al Qaeda is resurgent, Iran is developing nuclear weapons, that our foreign policy is if not in a shambles, then certainly in a place that I think anybody is comfortable with - given those facts, what I don't understand is that Senator McCain continues to promote them."

Face the facts: A fact check on gas prices
Thanks for reading CBS NEWS.
Create your free account or log in
for more features.
View CBS News In
CBS News App Open
Chrome Safari Continue
Be the first to know
Get browser notifications for breaking news, live events, and exclusive reporting.