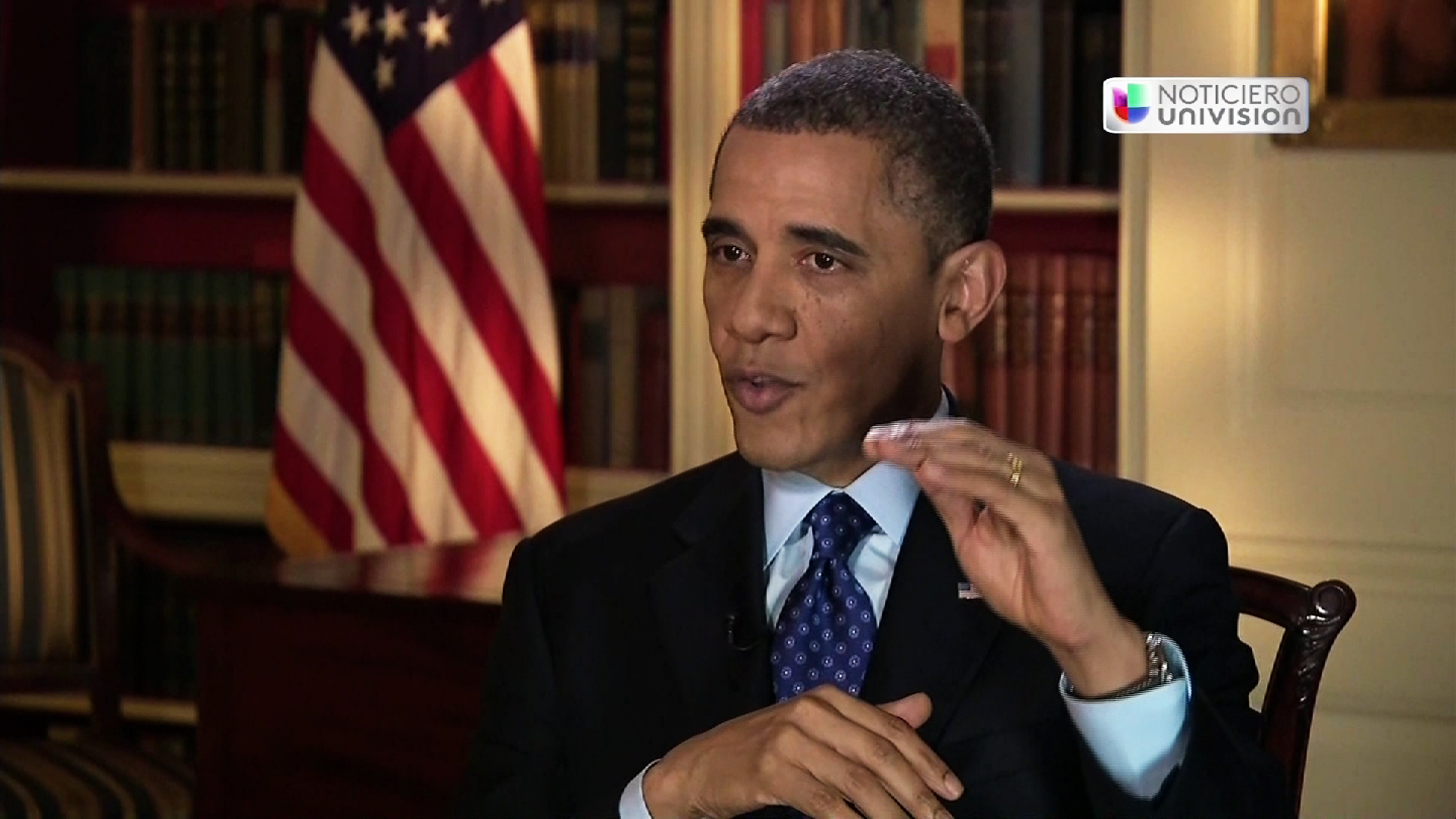 There's more bipartisan support in Congress for comprehensive immigration reform than gun control legislation, President Obama said tonight during an interview with Univision, but qualified that even under his proposal, illegal immigrants shouldn't be harboring expectations that they'll be granted citizenship "manana."

"Even under our proposal, this is not a situation where overnight, suddenly people all find themselves as citizens," Mr. Obama told the Spanish-language television network. "They're going to have to go to the back of the line. We're going to have to clear out the existing line, backlogs we have in terms of illegal immigrants, because they did it the right way. We shouldn't punish them for breaking the law.

"...What we don't want to do is to create some vague prospect in the future that somehow comprehensive immigration reform that includes a pathway to citizenship will happen manana," he continued, chuckling softly at the somewhat awkward injection of the Spanish word for "tomorrow." "But we have to put that in place at the outset, and make sure people are clear that this pathway is real and not just a fantasy for the future."

Asked whether he was in a standoff with Sen. Marco Rubio, R-Fla., the son of Cuban immigrants who has said he will not support a bill that does not put border control ahead of a path to citizenship, Mr. Obama said no, but pointed out that the number of people crossing the border illegally has dropped "about 80 percent since 2000."

On Tuesday, the president delivered a speech in Las Vegas outlining his immigration plan and applauding a bipartisan group of eight senators that has offered up proposals as well. In an interview today with another Spanish language network, Telemundo, he specified that he's hoping immigration reform that includes a pathway to citizenship can be passed in the next six months, but "certainly this year."

Meanwhile, despite facing more resistance from the right on tightening gun laws, he said he has "no doubt" that Congress will be able to put through legislation on gun control, as well as immigration.

"On the gun issue, you're starting to see gun owners, people who traditionally have opposed gun control, saying, 'You know what, when 20 of our children are shot by somebody who is disturbed, and when it is that easy to get these high-clip magazines that can fire off hundreds of shots in a few minutes, then it's time for us to do better job on background checks, to get control of these magazine clips, to really crack down on gun trafficking," Mr. Obama said in the Univision interview.

The Senate Judiciary Committee today held the first congressional hearing on gun violence since last month's massacre at a Newtown, Conn., elementary school, that left 20 children and six adults dead. Star witnesses included former Rep. Gabrielle Giffords, D-Ariz., who survived a shot to the head two years ago during an assassination attempt that left six people dead, and her husband on one side, and NRA CEO Wayne LaPierre on the other.

Both gun control and immigration "will end up generating some opposition," the president said. "There will be passions on both sides. But I'm generally encouraged that the Senate seems to be having a serious conversation about these issues."