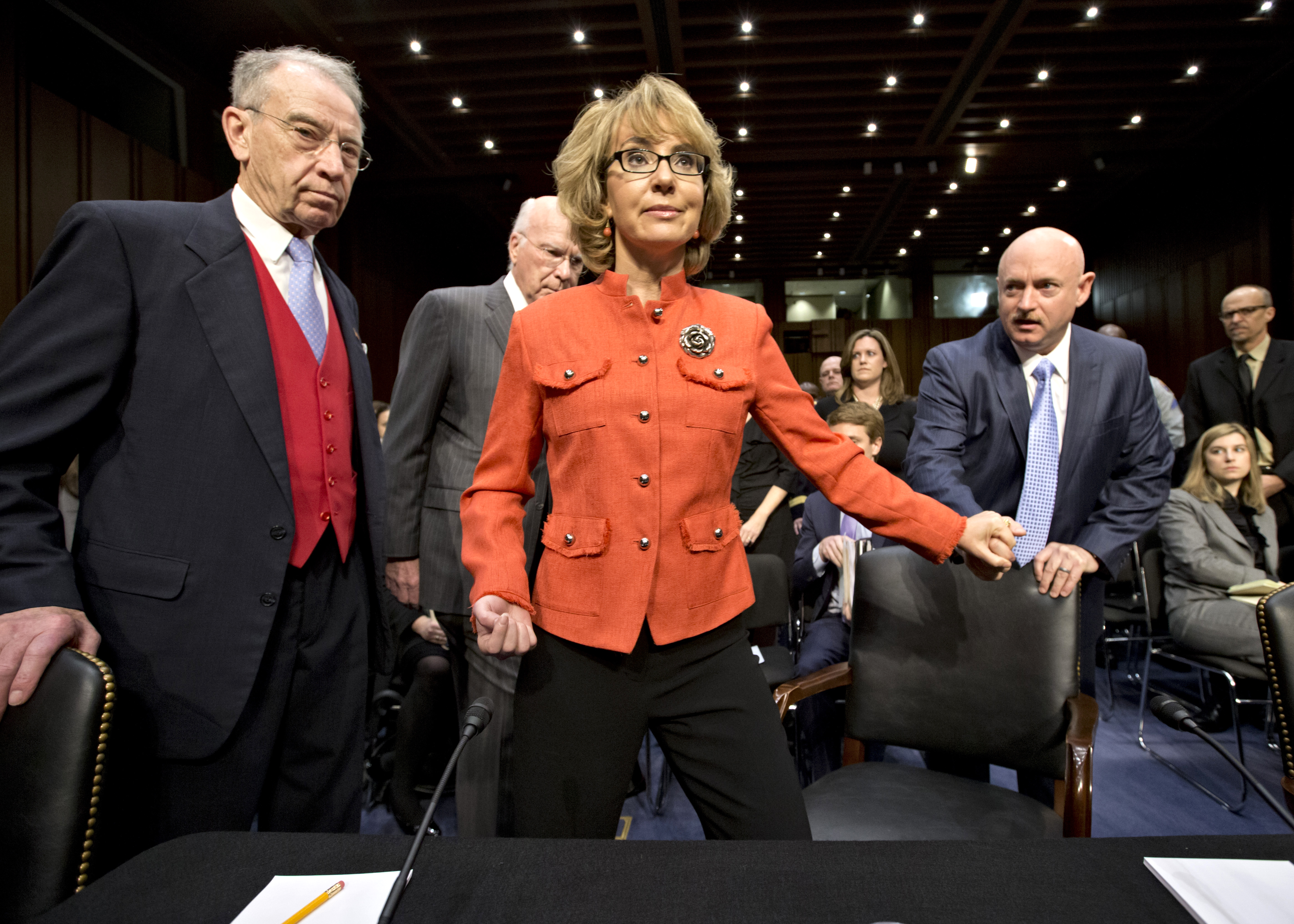 In remarks kicking off today's Senate Judiciary Committee hearing on gun violence, former Rep. Gabrielle Giffords, D-Ariz., made a defiant call for Congress to "be bold" and "act" on gun violence.

Giffords, who survived a gunshot to the head two years ago during an assassination attempt that left six people dead, read slowly but forcefully from prepared remarks, and acknowledged that "speaking is difficult."

"But I need to say something important. Violence is a big problem," she said. "It will be hard. But the time is now. You must act. Be bold. Be courageous. Americans are counting on you."

The longstanding debate over the nation's gun laws has taken on renewed resonance in recent weeks, in the aftermath of a mass shooting last month that left 20 first-graders and six adult faculty members dead at a small-town elementary school in Newtown, Conn.

Since then, Mr. Obama and Vice President Joe Biden have vowed to enact meaningful change to reduce gun violence in America, and consulted stakeholders from all sides of the debate on how best to achieve that goal. In remarks unveiling his findings from that process earlier this month, Mr. Obama proposed a series of sweeping new laws, including the reinstatement of the assault weapons ban, universal background checks on gun buyers, and a ban on high-capacity magazine ammunition.

Testifying before the committee this morning, former astronaut Mark Kelly, Giffords' husband, made an impassioned entreaty for bipartisan action to curb gun violence. Kelly, who with Giffords recently started a PAC with that same goal, said his first priority is fixing the nation's background check system.

"The holes and our laws make a mockery of the background check system. Congress should close the private sales loophole, and the dangers people entered into that system," he said.

Kelly also called for tougher gun trafficking laws, the removal of limitations on collecting data and scientific research on gun violence, and "a careful and civil conversation about the lethality of fire arms we permit to be legally bought and sold in this country."

He stressed that both he and Giffords are gun owners, and that they support the "right to own a firearm for protection, collection and recreation."

"Gabby and I are pro-gun ownership. But we are also anti-gun violence," he said. "When dangerous people get dangerous guns, we are all the more vulnerable."

The implementation of universal background checks is thought to be among the White House's top priorities with regard to its gun control proposals, and James Johnson, chief of police for Baltimore County, Md., and chairman of the National Law Enforcement Partnership to Prevent Gun Violence, supported the notion of its efficacy in testimony before the committee today.

"The best way to stop a bad guy from getting a gun in the first place is a good background check," Johnson said.

Johnson also said he's seen an "explosion of fire power since the assault weapons ban expired," and argued that "the ban on assault weapons, and high-capacity ammunition must be reinstated."

"Victims are being riddled with multiple gunshots," he said. "The common-sense measures we call for will not infringe on the Second Amendment rights, but will keep guns out of the dangerous hands of -- of people who are out there to commit danger in our society, and excessive firepower out of our communities."

While gun control advocates and many Democrats have applauded the White House for recent calls for action on this issue, it's unclear which of these proposals -- if any -- can make it through the Republican-controlled House of Representatives. And the pro-gun lobby has already begun using its considerable resources to target the president's proposals.

Wayne LaPierre, the CEO and Executive Vice President of the NRA, made the case this morning that efforts to curb gun violence should be focused on strengthening school security and mental health resources. He also stated his opposition to closing gun show loopholes, arguing that criminals won't submit to background checks anyway.

"The problem with gun laws is, criminals don't cooperate with them. The mentally ill don't cooperate with them," he said. "Law-abiding gun owners will not accept blame for the acts of violent or deranged criminals, nor do we believe the government should dictate what we can lawfully own and use to protect our families... We need to be honest about what works and what does not work. Proposals that would only serve to burden the law-abiding have failed in the past and will fail in the future."

Gayle Trotter, an attorney and senior fellow at the Independent Women's Forum, argued that assault weapons provide a woman with "peace of mind" -- because "knowing she has a scary looking gun gives her more courage."

"An assault weapon in the hands of a young woman defending her babies at her home becomes a defense weapon," she said.

Throughout the lengthy hearing, advocates from both sides remained adamant in defense of their views, and Democrats objected strongly to assessments by LaPierre and Trotter that background checks and stricter regulations of gun sales would do nothing to solve the problem at hand.

Sen. Dick Durbin, D-Ill., told LaPierre that his testimony missed the point "completely" on how a universal background check would deter criminals from purchasing firearms; Kelly, meanwhile, argued that stronger background checks could have prevented his wife's shooter from acquiring his weapon.

Later today, Giffords and Kelly will meet with Mr. Obama in a meeting closed to the press, according to White House spokesman Jay Carney.