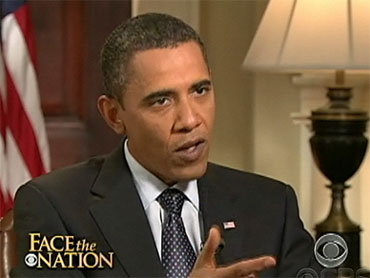 President Obama insisted that if his decision to reverse the Bush administration plan to place a missile defense system in Poland and the Czech Republic resulted in better U.S.-Russia relations, that is a fortuitous "by-product," not the objective.

"If the by-product of it is that the Russians feel a little less paranoid and are now willing to work more effectively with us to deal with threats like ballistic missiles from Iran or nuclear development in Iran, then that's a bonus," he told "Face the Nation" host Bob Schieffer.

While critics in Congress saw the policy reversal as a quid pro quo for Russian cooperation in enforcing United Nations sanctions against Iran, the administration has been adamant that it was purely a defensive move.

"The Russians don't make determinations about what our defense posture is," the president said during the interview taped Friday. "We have made a decision about what will be best to protect the American people as well as our troops in Europe and our allies."

, President Obama (and his Secretary of Defense Robert Gates) said advances in technology in U.S. defense systems and reassessments of Iranian missile capability created a new landscape. Short- and middle-range missiles are now, allegedly, more effective than longer range ones.

Schieffer asked why President Obama did not try to get any assurances from the Russians in the move.

Without answering the question directly, the president repeated that after the commissioned review of the defense systems, experts including Gates (who as President Bush's Defense Secretary had previously defended the missile defense plan), "came back to me and said, 'You know what, given what we know now we actually think this is a better way of doing it.'"

10/3: Face The Nation with Margaret Brennan

Rite Aid CEO: States in the lead for vaccine appointments