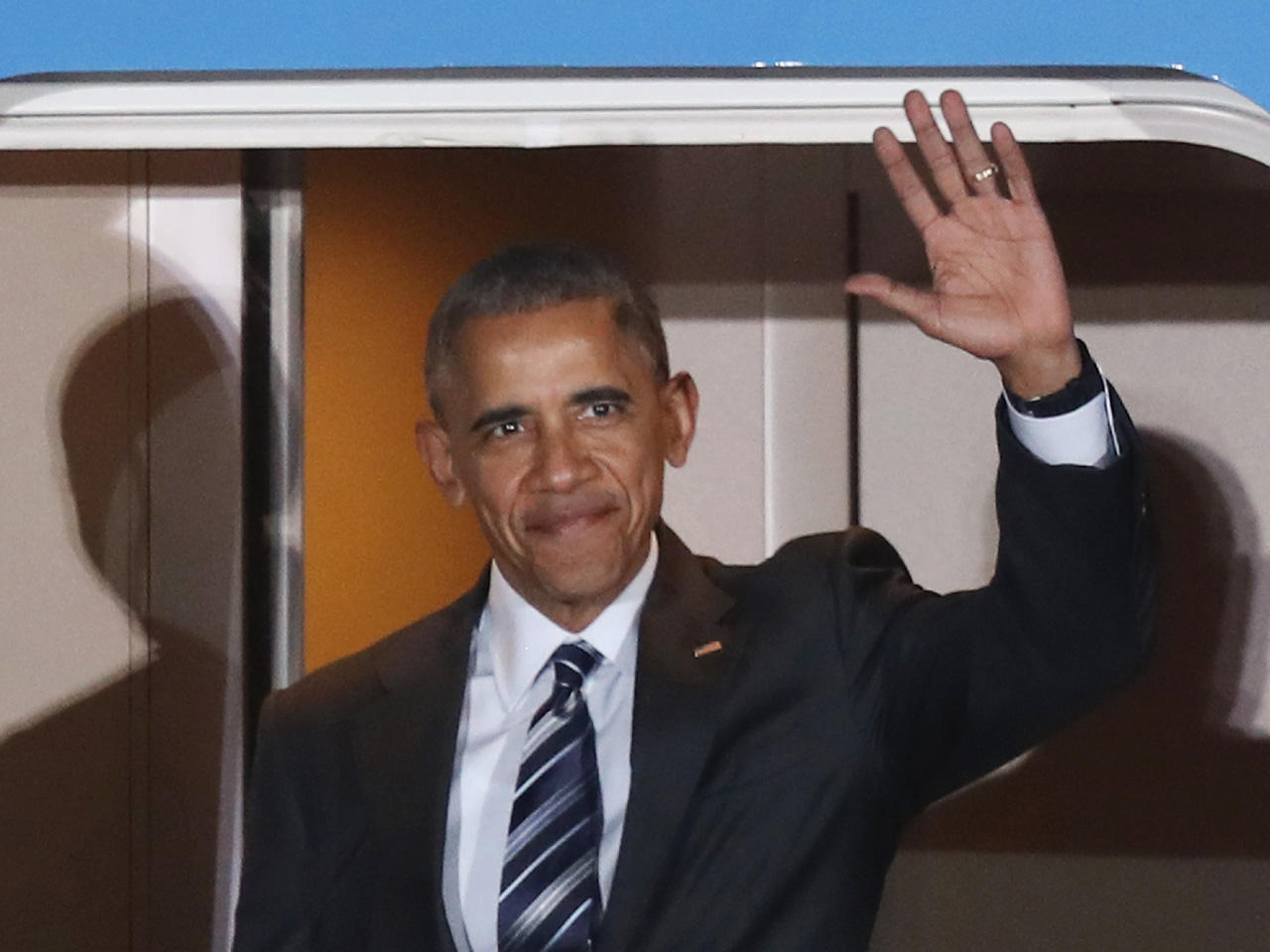 BERLIN -- President Obama is stressing a message of solidarity and trans-Atlantic cooperation on his final visit Thursday to Germany -- a top trade partner, key NATO ally and home to thousands of American troops, as well as a nation critical to solving Europe’s migrant crisis and debt woes.

President-elect Trump’s rhetoric and friendly outreach to Russia has German Chancellor Angela Merkel and many others in her country -- and across Europe -- concerned. Her foreign minister went so far as to call Mr. Trump a “preacher of hate.”

Mr. Obama arrived Wednesday night in Berlin from Greece, making his sixth and final visit as president to Germany, where he has been popular since even before he was elected. His eight years in office have helped erase much of the anti-American sentiment that had grown during the administration of George W. Bush over the Iraq war and other policies.

Merkel, who worked well with Bush before Mr. Obama’s election, dined with the president Wednesday night at his hotel and was to hold talks with him Thursday afternoon. The downtown area around the Chancellery and hotel where Mr. Obama was staying was locked down tightly, with some 2,400 police officers on hand manning road blocks and checkpoints.

In a joint opinion piece published Thursday in Germany’s weekly business magazine Wirtschaftwoche, which seemed directed as much at the incoming Trump administration in the U.S. as European nations, the two leaders stressed that the “underlying bedrock of our shared values is strong” even if the pursuit of common goals is sometimes gone about differently.

Mr. Obama and Merkel noted that European Union-U.S. trade was the largest between any two partners worldwide, and emphasized that the trans-Atlantic friendship has helped forge a climate accord, provide help for refugees worldwide, form a collective defense under NATO, and strengthen the global fight against the Islamic State of Iraq and Syria (ISIS).

“That friendship is based on our shared commitment to personal freedom and dignity, which only a vibrant democracy under the rule of law can guarantee,” the leaders wrote.

Merkel and Mr. Obama have enjoyed a close relationship over the years, and Mr. Obama seems to be counting on the German leader’s strength to help counter the isolationist tone voiced by president-elect Donald Trump during the election campaign. Although the relationship hit a bump in 2013 when it was revealed the U.S. National Security Agency had been monitoring the chancellor’s cell phone, tensions were smoothed over after President Obama acknowledged Germany’s anger and promised new guidelines for monitoring.

When Mr. Obama first visited the German capital in 2008, some 200,000 exuberant fans packed the road between the landmark Brandenburg Gate and Victory Column to hear the then-candidate, in a speech that solidified his place on the world stage.

In a city where President John F. Kennedy in 1963 pledged steadfast American support for Germany against the Soviet bloc with his iconic “Ich bin ein Berliner” speech and President Ronald Reagan in 1987 challenged then-Soviet leader Mikhail Gorbachev to “tear down this wall,” Mr. Obama told Berliners that true progress requires sacrifice and shared burdens among allies.

Eight years later, his words seem to have foreshadowed the nationalist, isolationist forces gaining traction in some parts of Europe and punctuated by Trump’s victory in the U.S. election.

In Germany, officials have been outspokenly hopeful that the change in presidents will not signal a significant shift in relations between the two nations or the NATO alliance.

“The Americans are among ...  our most important partners and we want to continue this partnership economically, politically and through shared values,” Peter Tauber, the general secretary of Merkel’s Christian Democratic Party, told reporters in Berlin, ahead of Mr. Obama’s visit.

“I think one will see that Mr. Trump will have his own political suggestions, but that the USA won’t be a different country tomorrow.”

White House aides had hoped Mr. Obama might be able to return to the Brandenburg Gate, where he spoke in 2013, for a symbolic visit on his last trip to Germany, but the visit didn’t materialize. Overall, the celebratory nature of the U.S. president’s final world tour has been significantly tamped down in light of the U.S. election results.

In Berlin, Mr. Obama will also meet Friday with the leaders of France, Italy, Spain and Britain. He’s expected to address Mr. Trump’s election and the direction the U.S. might take in the next four years.

Merkel already talked with Mr. Trump by phone after his election, offering him Germany’s “close cooperation,” but emphasized it would be on the basis of what she said were shared values of “democracy, freedom, respect for the law and for the dignity of human beings, independently of origin, skin color, religion, gender, sexual orientation or political views.”

In addition to the U.S. election, Mr. Obama and Merkel are expected to discuss a wide range of issues behind closed doors, including joint efforts to resolve the conflicts in Ukraine and Syria, the fight against ISIS and trans-Atlantic trade.

Mr. Obama traveled to Berlin from Greece, which has been at the center of Europe’s debt crisis, and the president was also expected to encourage some sort of debt forgiveness for the country -- something the International Monetary Fund has lobbied for but Germany and several other nations oppose.

The refugee issue is also at the top of the agenda on Mr. Obama’s trip. Greece was the entry point to Europe for hundreds of thousands of migrants last year. Germany has taken in the vast majority with some 1.1 million arrivals since the start of 2015.