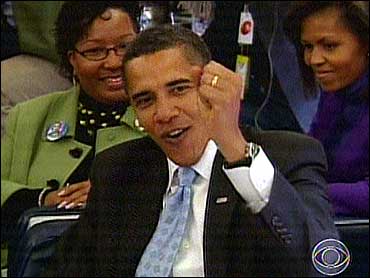 President-elect Barack Obama, who rode an extensive grass-roots organization to fundraising records and the White House, announced plans to pair a campaign organization with the Democratic Party to push his agenda with an eye toward re-election in 2012.

Days before he even takes the oath for his first term, Obama said Saturday that the newly created Organizing for America would enlist community organizers around the country to support local candidates, lobby for the president's agenda and remain connected with his supporters from the campaign.

The entity will operate from the Democratic National Committee headquarters but will be independent in structure, budget and priorities.

"As president, I will need the help of all Americans to meet the challenges that lie ahead," Obama said in a video message to supporters. "That's why I'm asking people like you who fought for change during the campaign to continue fighting for change in your communities."

In short, Obama has already started working on winning a second term before he starts his first on Tuesday.

Obama's campaign organization has some 13 million e-mail addresses that cut across the political spectrum. Obama's top advisers had considered transferring that list — from which Obama raised $745 million — to the Democratic National Committee.

Millions of small donors pushed Obama's fundraising to record-shattering amounts and the candidate tapped into the Internet to spread his message.

The joint statement from the Obama team and the DNC said more than 500,000 Americans completed surveys following the election describing their goal for the organization, and more than 4,200 hosted house parties.

Party officials had hoped Obama would transfer his list of supporters to the party, a move that would put them in control of one of the most extensive campaign organizations in politics.

Instead, Obama decided to keep ownership of that enormous campaign and install his own loyalists to run it. His top aides decided the list should remain separate in keeping with a theme of post-partisan rhetoric.