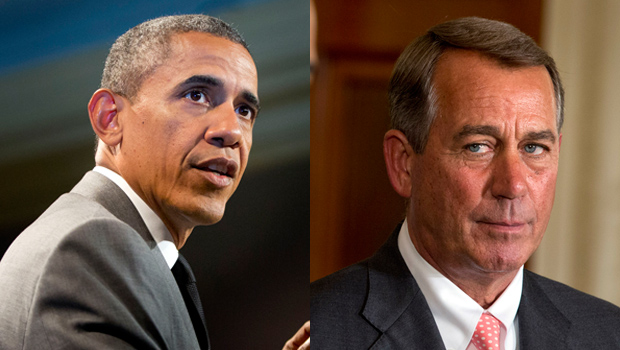 WASHINGTON -- Over Democratic objections, Republicans cleared the way Thursday for a House vote on legislation authorizing an election-year lawsuit accusing President Barack Obama of failing to implement the 4-year-old health care law as it was written.

The vote in the Rules Committee was 7-4, with all Republicans in favor and all Democrats opposed.

Republicans say the lawsuit, announced by House Speaker John Boehner, R-Ohio, is necessary because Obama is exceeding his authority as president by failing to carry out legislation that Congress passed and he signed into law.

"The Constitution that we have sworn to uphold provides separate powers for each branch of the federal government, so that no single branch can trample upon the liberties of the American people," said Rep. Pete Sessions, the Texas Republican who chairs the panel. "Unfortunately the president has ignored the requirements of the Constitution."

Democrats swiftly countered that the suit is a political maneuver designed to improve Republican prospects in the November elections. In a statement released shortly after the vote, the party's House leader, Rep. Nancy Pelosi of California, said constitutional law experts have said the suit is without merit.

"But you don't need to be an expert to see it's nothing more than a desperate partisan stunt. Republicans should drop the distractions and join Democrats in addressing the priorities of the American people: creating jobs," she said.

Even so, Democrats conceded that majority Republicans have enough votes to prevail when the measure comes to a scheduled vote in the next few days, shortly before lawmakers begin a five-week vacation.

Republicans have long claimed that Obama has selectively enforced the health care law, pointing to a series of executive orders he has issued since its enactment. The administration disputes that view.

In his remarks, Sessions expanded the list of allegations, saying Obama had unilaterally waived work requirements for welfare recipients, ended accountability provisions in the education law No Child Left Behind, and refused to inform Congress of the transfer of Taliban prisoners from the U.S. detention center at Guantanamo Bay, Cuba.

Rep. Louise Slaughter, D-N.Y., predicted that any suit would be thrown out on procedural grounds.

Slaughter said that a federal judge had recently dismissed a suit by Sen. Ron Johnson, R-Wis., regarding lawmakers and aides and their health care. The allegation in the suit was that the administration had incorrectly applied the law, she said, adding that U.S. District Judge William C. Griesbach refused to hear the case.

She quoted him as ruling: "Under our constitutional design, in the absence of a concrete injury to a party that can be redressed by the courts, disputes between the executive and legislative branches over the exercise of their respective powers are to be resolved through the political process, not by decisions issued by federal judges."

Democrats on the Rules committee also expressed concerns about the cost of the lawsuit, citing the fact that the GOP spent around $2.3 million to defend the Defense of Marriage Act in court and gave a $3.3 million budget to the committee charged with investigating the Benghazi attacks. Slaughter described the suit as an "extravaganza" that will "cost millions," and asked Sessions, "What programs will be taken away to fund this?"

Sessions responded, "We will spend only what is necessary."

The legislation cleared by the committee on Thursday allows the House to sue any executive branch officials, including the president, for failing to carry out their duties under the Constitution in connection with implementation of the law.

Boehner has vociferously disputed charges that the legal move is politically motivated, or that it is designed to tamp down sentiment among tea party supporters for impeachment proceedings against Obama.

For their part, Democrats have used the possibility of a lawsuit to raise campaign contributions in advance of the November elections.

"This is not about the law. This is about politics," said House committee member Jim McGovern, D-Mass., who added that the lawsuit arose from Republicans' "sour grapes" over the fact that Obama was elected twice. "The American people are sick and tired of endless investigations."