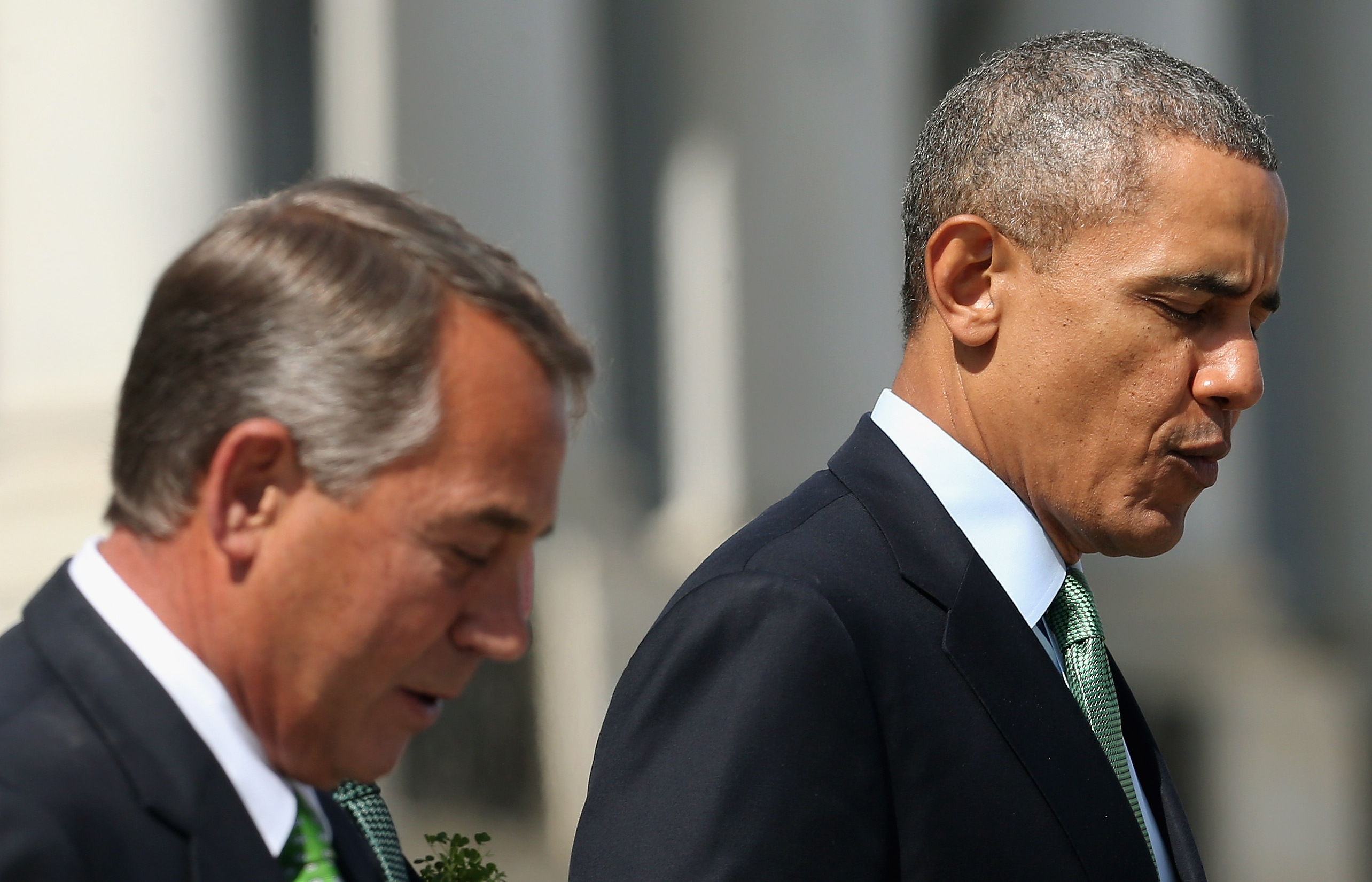 On Wednesday, a House committee will consider Speaker John Boehner's seemingly counterintuitive plan to sue the president. The speaker has suggested the House should sue President Obama for delaying implementation of the employer mandate -- a provision that of the Affordable Care Act that Republicans in the House don't want to implement anyway.

In fact, the House has actually passed a bill (though it died in the Senate) to stop the implementation of the provision. And if the lawsuit were successful and Mr. Obama were forced to implement the mandate, the House would once again pass a bill to stop its implementation.

None of this, however, is deterring the lawsuit's supporters, who are more interested in making a broad statement about the need to rein in presidential power than they are about the employer mandate.

"People are looking at this controversy in terms of whether they support health care or immigration reform -- that's not what this is about," Jonathan Turley, a law professor at George Washington University, explained to CBS News.

"President Obama did not start this trend toward a dominant American presidency -- it's' been building for some time, but it certainly has accelerated under President Obama. We have a system that is not designed for this type of uber-presidency."

Turley is one of four legal scholars who will testify on Wednesday before the House Rules Committee -- the panel that is tasked with drafting the resolution to pursue the lawsuit. After Wednesday's hearing, the committee will potentially amend their current draft. The resolution should make it to the House floor within a couple of weeks.

While Congress has a host of powers it can use to keep the president in check -- such as directing funding in certain ways, or delaying the confirmation of presidential nominees -- Turley and some other legal scholars say the executive branch has assumed so much power, a lawsuit is necessary to recalibrate the balance between the three branches of government.

Boehner has cited a number of ways Mr. Obama has overstepped his authority, but proponents of the lawsuit say the controversy over the employer mandate has the best chance of winning in court.

Under the ACA's employer mandate, businesses with more than 50 workers provide health-care coverage or pay fines of $2,000 per employee. The rule was initially supposed to go into effect in 2014, but last year, the administration pushed back its enforcement by a year. In February, the administration said companies with 50 to 100 full-time employees don't have to comply until 2016. The administration delayed the new rule, even though the law explicitly says the employer mandate "shall apply to months beginning after December 31, 2013."

"We're arguing that the president can't unilaterally change the law, without congressional action," the speaker's office said in a memo it recently issued. "Rather than provide relief to all Americans, the president circumvented Congress and made his own, new law. The President of the United States doesn't have the authority under the Constitution to do that."

The Rules Committee on Wednesday will hear from backers of the lawsuit, as well as legal experts opposed to it.

Simon Lazarus, senior counsel to the Constitutional Accountability Center, plans to tell the committee that the administration's actions in this case are "exactly what all administrations do -- or should do -- when they are implementing very complicated, big new laws."

There's nothing new about executive agencies pushing the implementation of laws when necessary, Lazarus told CBS News, noting that even Michael Leavitt -- President George W. Bush's Health and Human Services secretary -- called the decision to delay the employer mandate "wise." Leavitt compared it to his own decision to delay the implementation of Medicare's new prescription drug benefit in 2006.

"This sensible adjustment is not a refusal to enforce the ACA, it is a phasing in of the ACA," Lazarus said. "That is exactly, in my view, what the Constitution contemplates when it tells the president to 'take care that the laws be faithfully executed.'"

Additionally, Lazarus notes in his prepared testimony, "Applicable judicial precedent places such timing adjustments well within the Executive Branch's lawful discretion... Courts have found delays to be unreasonable only in rare cases where, unlike this one, inaction had lasted for several years, and the recalcitrant agency could offer neither a persuasive excuse nor a credible end to its dithering."

Before getting to the merits of the case, the courts would have to decide whether or not the House has the right to sue the president in the first place. In order to prove it has standing in court, the House would have to convince the courts it has a personal stake in the outcome of a lawsuit or that it has been personally harmed by the president's actions.

"It is the threshold question of standing that is the most difficult step for a lawsuit of this kind," Turley said.

"In the last couple decades, the Supreme Court has aggressively narrowed standing -- not just for members of Congress, but for citizen groups and individual citizens," he continued. "We've gone through a very hostile period in which federal courts routinely bar people from a ruling on the merits in these cases... Legislative standing would go a long way in rebalancing the branches -- it would allow for judicial review that has been missing in these cases."

The courts haven't made it clear how they would rule in this case. Last year, in its ruling striking down part of the Defense of Marriage Act (DOMA), the court allowed the House of Representatives (represented by the Bipartisan Legal Advisory Group, or BLAG) to defend DOMA when the Obama administration would not. However, the court explicitly said that because of that cases unique circumstances, "the Court need not decide whether BLAG would have standing to challenge the District Court's ruling" to let the case proceed.

Other legislative attempts to sue the president have been less successful. In 1999, 26 bipartisan lawmakers sued President Clinton, charging that he violated the War Powers Act by engaging in airstrikes against Yugoslavia without congressional approval. However, a federal judge threw out the case in part because the legislators had no standing in court.

"The best chance for standing is when a lawsuit is brought on behalf of the institution," Turley said.

Elizabeth Foley, a law professor at Florida International University, has laid out a four-part argument for standing, claiming in part that the House can claim injury by the president's actions because they amount to "a nullification of legislative power."

Walter Dellinger, a partner at O'Melveny & Myers who served as U.S. Solicitor General during the Clinton administration, will tell the Rules Committee that this four-part argument isn't good enough. Dellinger makes the case that the employer mandate delay does not nullify legislative power since "administering the law is not part of the legislative power." Even if it were, he notes, "The House is not the Congress." And the Democratic-led Senate surely won't be joining the suit.