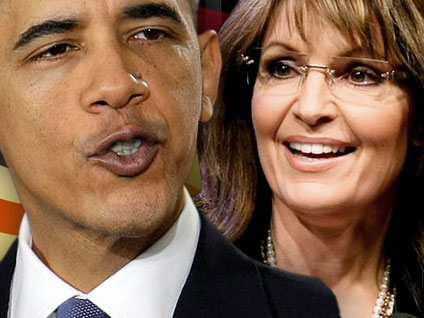 Sarah Palin said this month that she thinks she could beat President Obama in 2012 if she were the Republican presidential candidate, but Mr. Obama says he has other things on his mind.

"I don't think about Sarah Palin," Mr. Obama said in an interview with ABC's Barbara Walters, which airs Friday.

"Obviously Sarah Palin has a strong base of support in the Republican Party and I respect those skills," the president said. "But I spend most of my time right now on how I can be the best possible president. And my attitude has always been, from the day I started this job that if I do a good job and if I'm delivering for the American people the politics will take care of itself."

He added, "If I falter and the American people are dissatisfied, then I'll have problems."

For those keeping tabs, Vice President Joe Biden said recently that if Palin were the GOP nominee, Mr. Obama "would be in very good shape" to beat her.

Palin Publisher Says Gawker Lawsuit Is SettledPalin's "America by Heart" has 2012 Watchers GuessingPresident Palin? Three Hurdles She Will Have to Overcome Stephanie Condon is a political reporter for CBSNews.com. You can read more of her posts here. Follow Hotsheet on Facebook and Twitter.