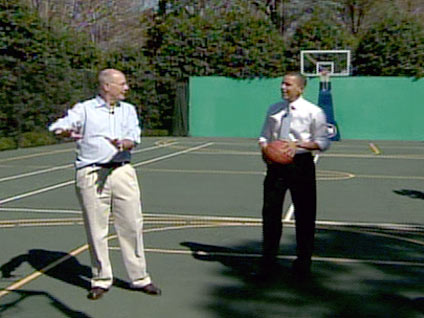 Smith asked Mr. Obama, who is left-handed, if he can ever go to his right.

"I can go to my right, but I prefer my left," the president says.

"You know, I've got a few other things on my mind," said Mr. Obama, who then makes the jump shot. "Its like health care, I always come from behind - I finish strong." Watch the video at left.

Watch for more of Smith's interview with Mr. Obama tonight on the "CBS Evening News with Katie Couric" and Friday morning on "The Early Show."

Smith also asked the president if he is aware of the extreme terms some use to describe him, such as "socialist" or "Nazi."

"Well, I think that when you listen to Rush Limbaugh or Glenn Beck, it's pretty apparent, and it's troublesome, but keep in mind that there have been periods in American history where this kind of vitriol comes out," Mr. Obama said. "It happens often when you've got an economy that is making people more anxious, and people are feeling like there is a lot of change that needs to take place. But that's not the vast majority of Americans. I think the vast majority of Americans know that we're trying hard, that I want what's best for the country." (video at left)

"I didn't buy all the hype, right after inauguration, where everybody was only saying nice things about me," he added. "And I don't get too worried when things aren't going as well because I know that over time these things turn."

The president said both Democrats and Republicans have a responsibility to tone down the rhetoric, but that much of it has to do with the current media environment in which extreme comments are echoed in the blogosphere.