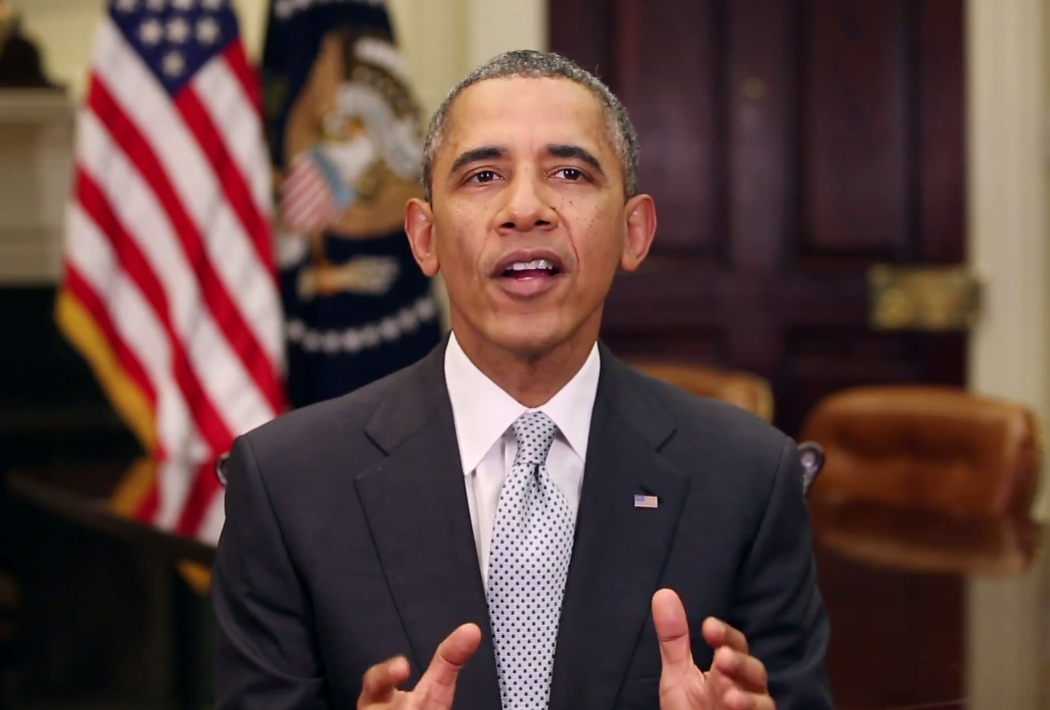 President Obama contrasted his fiscal year 2015 budget with the budget recently unveiled by House Republicans Saturday, saying the GOP plan, authored by House Budget Chairman Rep. Paul Ryan, R-Wis., "shrinks opportunity and makes it harder for Americans who work hard to get ahead."

"The Republican budget begins by handing out massive tax cuts to households making more than $1 million a year," Mr. Obama said in his weekly address. "Then, to keep from blowing a hole in the deficit, they'd have to raise taxes on middle-class families with kids. Next, their budget forces deep cuts to investments that help our economy create jobs, like education and scientific research."

In comparison, the president said, his own budget contains four goals that should expand opportunity and grow the middle class.
"Number one is creating more good jobs that pay good wages," he said. "Number two is training more Americans with the skills to fill those jobs. Number three is guaranteeing every child access to a great education. And number four is making work pay, with wages you can live on, savings you can retire on, and health care that's there for you when you need it."

The president also panned Republicans for continuing to seek the repeal of Obamacare in their latest budget, saying Republicans would offer no recourse to the over 7 million people "who've done the responsible thing and signed up to buy health insurance" under the health care reform law.

"And for good measure," he added, the GOP budget would "gut" the Wall Street reforms put in place by the Dodd-Frank bill shortly after the financial crisis of 2008 and 2009.

"Policies that benefit a fortunate few while making it harder for working Americans to succeed are not what we need right now," the president said. "Our economy doesn't grow best from the top-down; it grows best from the middle-out. That's what my opportunity agenda does - and it's what I'll keep fighting for."

Both fiscal blueprints have been targeted by their opponents as Republicans and Democrats jockey for advantage ahead of the 2014 midterm elections. Rep. Steve Israel, D-N.Y., who chairs the campaign arm of House Democrats, said Wednesday that Ryan's budget will "define the next seven months."

"With this budget," he said, "Republicans are turning their back on the middle class."

Ryan has defended his plan as a necessary bit of tough medicine, saying it would "cut waste and make much-needed reforms" to put the U.S. back on firm fiscal footing.

And Republicans have fired right back at the president's own budget. "This budget isn't a serious document; it's a campaign brochure," Ryan said in a statement shortly after the budget was released.

"This budget is a clear sign this president has given up on any efforts to address our serious fiscal challenges that are undermining the future of our kids and grandkids," Boehner warned in a statement.

In the weekly Republican address Saturday, Sen. Tim Scott, R-S.C., touted his proposal to restructure America's job training programs, saying it would help create the "most well-trained, best-educated workforce the world has ever seen."

Scott noted that 4 million jobs in America are currently vacant because job-seekers do not have the necessary skills to fill them.

"So let's tackle this problem head on," he said. "A more responsive and efficient system will ensure our workforce competes and wins in the 21st century."

"Instead of having 35 separate federal workforce training programs with expensive overhead and administrative costs, let's simplify them into one flexible Workforce Investment Fund," he said. "Instead of throwing billions of dollars each year at these programs with no measurable end results, let's give states and localities the flexibility they need to develop targeted plans to help low-income families, young folks, those with disabilities and, of course, the unemployed, the long-term unemployed and the underemployed."

Scott called on Senate Democrats to advance his measure, which has already passed the House of Representatives.