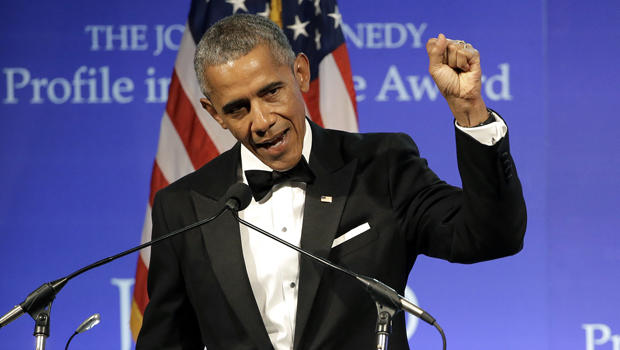 President Obama is strongly defending the nation's health care program which he signed into law as Republicans work to repeal it.

The former president received the annual Profile in Courage Award at the John F. Kennedy Library last night in Boston. The award was given to Obama for his overall contributions to public life by members of the Kennedy family.

The president used his first big speech back in the spotlight to re-enter the health care debate.

CBS News correspondent Jan Crawford reports that a well-rested Mr. Obama did not mention President Donald Trump by name during his more than 30-minute speech. He did, however, take the opportunity to defend the health care legislation that became the crowning jewel of his legislative legacy, while noting that "progress is fragile."

"There was a reason why health care reform had not been accomplished before -- it was hard," he said.

Accepting an award for courage, Mr. Obama shared recognition with Members of Congress who lost their seats supporting Obamacare: "These men and women did the right thing. They did the hard thing. Theirs was a profile in courage. Because of that vote, 20 million people got health insurance that didn't have it before."

The former president made no mention of his successor, who three days earlier celebrated a narrow vote in the House to undo Mr. Obama's signature achievement and replace it with a plan Republicans say will be more effective long-term.

"I hope that current members of Congress recall that it actually doesn't take a lot of courage to aid those who are already powerful, but it does require some courage to champion the vulnerable and the sick," Mr. Obama said.

Sticking to the theme of the night, the 44th president urged lawmakers to choose people over parties.

"It is my fervent hope that today's members of Congress, regardless of party, are willing to look at the facts and speak the truth, even when it contradicts party positions," he said.

During the speech, the former president pledged to continue to work to help the nation himself. He also thanked his wife, Michelle, and former Vice President Joe Biden, both of whom were in attendance.

Democrats who didn't fix issues with Obamacare in the last few years of his presidency are now banking on pushback to the Republican health care bill to help them win back control of Congress in 2018.

Mr. Obama will now head to Italy today to give a keynote address on climate change and food security in Milan.