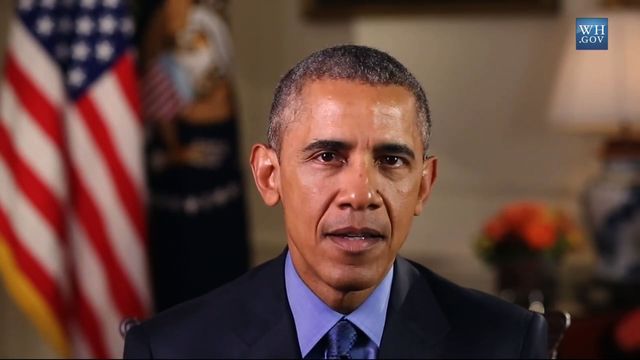 "Today, there are 2.2 million people behind bars in America and millions more on parole or probation. Every year, we spend $80 billion in taxpayer dollars to keep people incarcerated. Many are non-violent offenders serving unnecessarily long sentences," the president said in a video released Saturday. "Over the course of this year, I've been talking to folks around the country about reforming our criminal justice system to make it smarter, fairer and more effective."

The president launched his criminal justice reform tour two weeks ago, visiting areas around the country that have taken initiative in improving policing and rehabilitation strategies.

In his Saturday video, Mr. Obama previewed his trip to Newark, New Jersey, which is meant to "highlight efforts to help Americans who've paid their debt to society reintegrate back into their communities."

"Everyone has a role to play, from businesses that are hiring ex-offenders to philanthropies that are supporting education and training programs," Mr. Obama said.

He promised to continue pushing for bipartisan reform proposals, including a Senate bill that would reduce mandatory minimum sentences for nonviolent drug offenders. The legislation would also provide prisoners with shorter sentences if they participated in programs that would make them less likely to repeat their offense.

"Having millions of people in the criminal justice system, without any ability to find a job after release, is unsustainable," he said. "It's bad for communities, and it's bad for our economy."

Last week, the president defended the Black Lives Matter movement, saying at a White House forum on criminal justice that "there is a specific problem that's happening in the African-American community that's not happening in other communities."

"And that is a legitimate issue that we've got to address," Mr. Obama said.

In their own video, Republicans attacked another progressive policy area of Mr. Obama's: energy.

Sen. Lisa Murkowski, R-Alaska, bashed the Obama administration as having "repeatedly denied Alaska's best opportunities to produce energy for our nation and the world."

Murkowski slammed White House policies that blocked oil production in half of the National Petroleum Reserve and prevented development in the Arctic National Wildlife Refuge.

And, the Alaska Republican added, "in the Chukchi Sea, the constantly shifting regulatory environment recently forced a company to abandon seven years of work and $7 billion in investment."

"Instead of recognizing that as a significant loss, the administration doubled down last week by canceling offshore lease sales in the region," she said.

"All of these decisions ignore the will of hard-working Alaskans, who overwhelmingly support new production," Murkowski added. She also framed it as a national security issue, saying the White House "is opening the door for Iranian oil production, but closing it on Alaskan oil."

The Republican senator pushed for a bill that just passed out of the Senate Energy Committee, which she promised would "save energy, promote innovation, invest in critical infrastructure and boost our energy trade."

"There is a better path," Murkowski said. "There is no reason why our energy policy should be so divisive. And that's why I am working hard to forge bipartisan consensus on policies that will keep energy affordable and abundant as it becomes cleaner and cleaner."