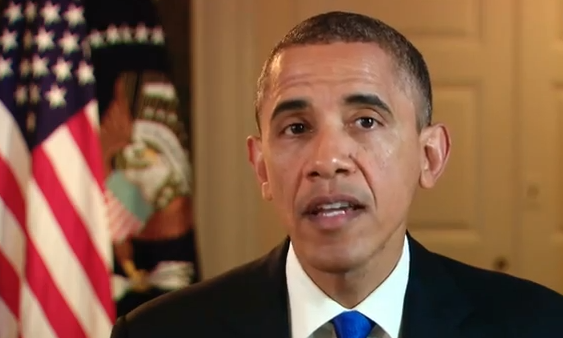 (CBS News) Citing "reckless behavior in the housing market" as the biggest cause of the near-economic collapse that threw the nation into recession four years ago, President Obama in his weekly address urged Republicans in Congress to get on board with a bill that would help struggling homeowners refinance their mortgages.

"Four years ago this month, a crisis that started out on Wall Street almost brought down our entire economy," the president said. "The nation's biggest banks were days away from failing. The stock market and millions of American retirement accounts were in free-fall. Credit froze. Lending stopped. And businesses large and small didn't even know if they'd be able to make payroll. It was a moment the likes of which few Americans had ever seen."

Responsible homeowners, Mr. Obama said, were plagued by "the irresponsible actions of others," including lenders and buyers who were unrealistic about repayment options; speculators "looking to make a quick buck"; and banks "that packaged and sold those risky mortgages for phony profits." And "When the party stopped, and the housing bubble burst," Mr. Obama continued, "it pushed our entire economy into a historic recession - and left middle-class families holding the bag."

The housing market is "healing," the president said. "But we're not there yet."

While touting his administration's work with state attorneys general to investigate treatment of homeowners, and a settlement won from the nation's biggest banks "to help families stay in their homes," President Obama again chided Congress for adjourning before acting on a plan he sent to the Hill in February that would save responsible homeowners $3,000 a year on their mortgages by allowing them to refinance at lower rates. "It's a plan that has the support of independent, nonpartisan economists and leaders across the housing industry," he said. "But Republicans in Congress worked to keep it from even getting to a vote."

Trying to make the case that President Obama "puts government first" and isn't interested in streamlining job creation for the middle class, Republican Congressional candidate for Arizona Vernon Parker in the weekly GOP response argued that the underlying problem with the country's ongoing economic turmoil is that "government won't get out of the way" of "employers who want to hire and workers who want to work."

Parker said his own personal history, growing up in "an underprivileged neighborhood replete with gangs, guns, and violence," rendered him singularly qualified to understand what it takes for Americans to be able to realize their American Dream and move securely into the middle class. The president's Affordable Care Act, he said, complicates businesses' abilities to expand and hire, and the U.S. corporate tax rate "pushes jobs away" to competitors.

"I agree with Mitt Romney and Paul Ryan that we need to stop all the looming tax hikes and develop a pro-growth tax code that brings jobs home and keeps jobs here," Parker said. "But President Obama? He puts government first. He actually wants to raise taxes on small businesses. He wants to keep our own energy resources under lock and key, including the Keystone XL pipeline. He wants more red tape, more spending that puts us more in debt to China, more of the same. No wonder Americans are asking, 'Where are the jobs?' No wonder jobs are fleeing overseas.

"Let's bring those jobs home, back to America, back to local small businesses."

Govs to Obama: Don't dump "fiscal cliff" costs on us