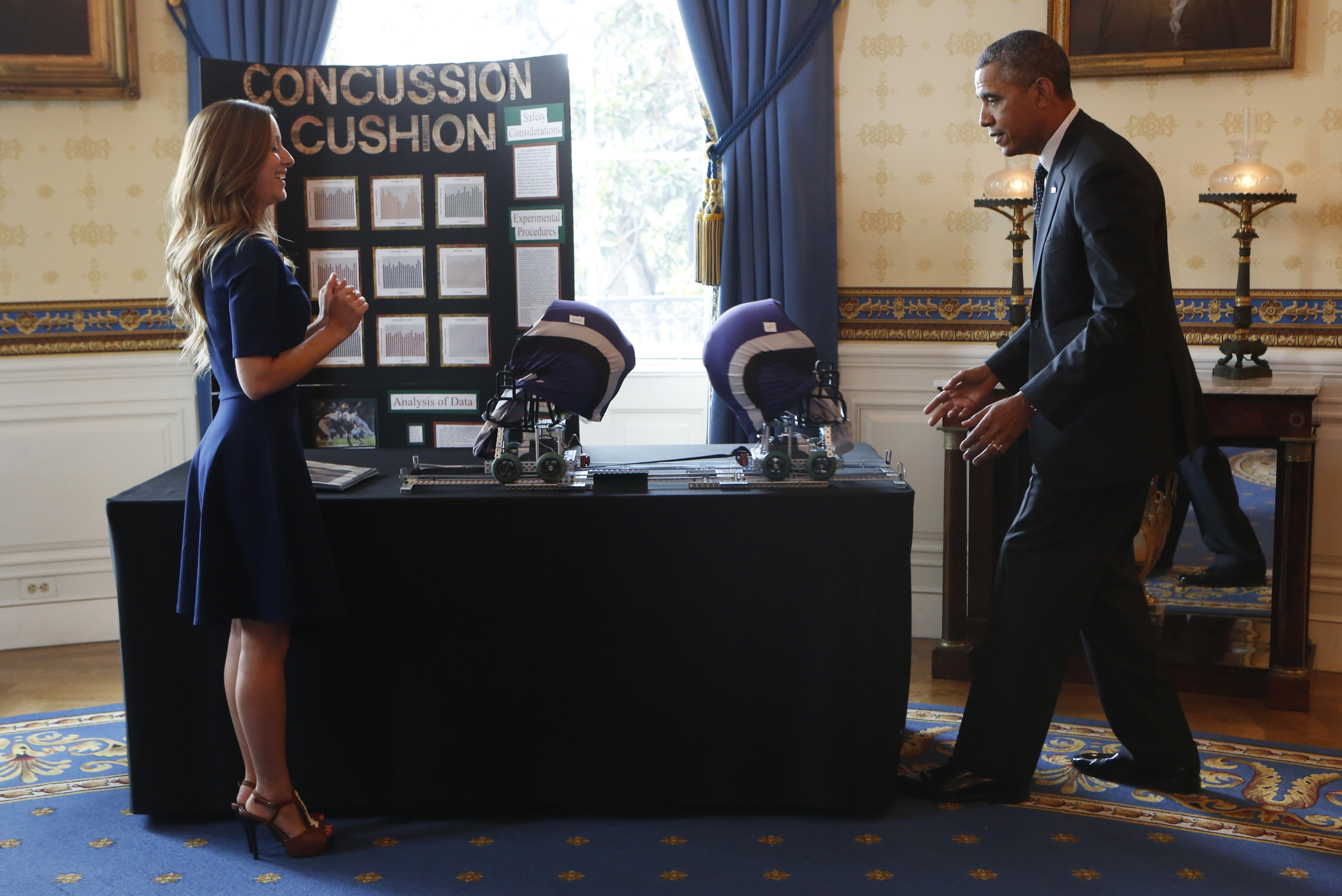 The White House on Thursday brought together more than 200 sports officials, parents, youth athletes and others to bring awareness to sports-related concussions, promote ways parents can keep their children safe, and shine a spotlight on the gaps in medical research on the matter.

Kicking off the event, President Obama said he probably suffered from multiple "mild" concussions when he played sports as a child, but he didn't think anything of it at the time. In addition to doing more research to understand head injuries, Mr. Obama said it was time to change the culture "that says you suck it up."

Still, the president encouraged kids and parents to continue to engage in sports, noting that pickup basketball games and golf are ways he clears his head.

Mr. Obama also noted that a better understanding of the science behind traumatic brain injuries will help protect both America's kids and the U.S. military.

The president became interested in hosting the summit, the White House explained, after discussing the issue with his press secretary, Jay Carney.

"I know parents across the country are making decisions about whether or not they want their kids to play football or other sports... in which concussions can happen," he added. The first-ever White House Healthy Kids & Safe Sports Concussion Summit is the "perfect opportunity," he said, for the White House to bring attention to an issue "that really is a topic of conversation across the country."

Young people make nearly 250,000 emergency room visits each year because of sport or recreation-related brain injuries, the White House notes. Yet according to a report published last fall by the Institute of Medicine and the National Research Council, there is a significant lack of data on concussions, particularly among youth.

In conjunction with the summit, the White House on Thursday is announcing several private-public partnerships designed to tackle that problem. For instance, the NCAA and the Defense Department are committing $30 million to the most comprehensive clinical study of concussion and head impact exposure ever conducted. They're also issuing an Educational Grand Challenge aimed at improving concussion safety behaviors in college sports and the military.

The NFL, meanwhile, is contributing $25 million over the next three years to help promote safety in youth sports. That includes providing funding for new pilot programs that will expand access to athletic trainers in schools, among other things. Additionally, the National Institutes of Health is using $16 million it received from the NFL (as part of a larger $30 million contribution) to study the chronic effects of repeated concussions.

"What we want to get out of this is for parents to have a better understanding of what the risks are, how to ameliorate the risk, and also to understand where the gaps [in information] are," White House spokeswomann Jennifer Palmieri told reporters.

The summit, she said, represents one more way Mr. Obama is trying to use his unique powers to unilaterally bring about change.

"We talk a lot about the president using the pen, using the phone, in terms of trying to accomplish action this year," she said. "This is a good example of that."

The president, however, isn't the only Washington official to take an interest in this issue. The well-being of young athletes has been a topic of conversation on Capitol Hill this year since a member of the National Labor Relations Board ruled that football players at Northwestern University could create the nation's first college athlete's union. The university challenged the ruling, but the full NLRB is expected to approve it.

Earlier this month, schools officials and other experts testified before the House Committee on Education and the Workforce about the impact unionizing could have on college sports. Andy Schwarz, an economist who wrote the book "Excuses, Not Reasons: 13 Myths About (Not) Paying College Athletes," told Congress that giving student-athletes the chance to be part of a free market or a union would "provide athletes with a voice" when it comes to issues like safety standards.

As it stands, he said, the NCAA is a price-fixing cartel intent on dodging legal responsibilities for athlete safety and medical expenses.

"Far more effort was spent to determine whether Johnny Manziel received a market rate of compensation for his autograph than was spent investigating whether Matt Scott of Arizona, who showed clear signs of concussion during a televised game (that I myself watched), was put at risk by quickly returning to play in the same game," Schwarz said in his prepared statement to Congress.

Congress has explored the issue beyond college athletics. In March, a subpanel of the House Energy Committee held a hearing called "Improving Sports Safety: A Multifaceted Approach."

Rep. Henry Waxman, D-Calif., said that Congress needs to ensure that neuroscience research is well funded. "I am encouraged by the potential of radiological and longitudinal research methods leading to earlier, more accurate diagnosis, to a better understanding of risk factors, and eventually to treatment options for brain injuries," he said.