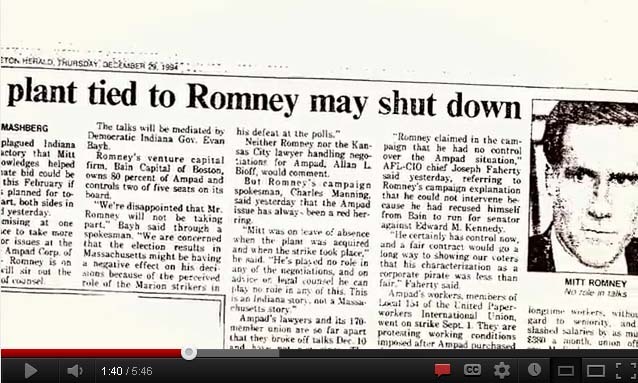 (CBS News) Attempting to drive home the message that Mitt Romney is a corporate executive concerned with the bottom line and not American jobs, the Obama campaign released a new video on Monday attacking Romney and Bain Capital for laying off workers at an Indiana office supply factory.

The video, which runs nearly six minutes in length, focuses on a Bain-owned company, Ampad, which bought SCM, an office supply production plant in 1994. The video uses local news reports and SCM workers to tell a story of slashed jobs, reduced wages, and cut pensions after Bain took over.

"I understand if you gotta cut back, [conduct] layoffs, that's part of the business, but you don't come in and take everything everybody's got and destroy a business. That's what they did," former SCM worker Jerry Rayburn said in the video.

Ampad filed for bankruptcy in 2000 after Bain made $100 million dollars, the ad charges.

The Obama campaign's ad on private equity firm Bain Capital, which Mitt Romney co-founded in 1984 and led until he left to run the 2002 Salt Lake City Olympics, is a continuation of attacksthe campaign began in earnest last week, where they highlighted GST Steel, a company that saw layoffs after Bain acquired it.

Romney used an interview with a conservative website to respond to the Obama campaign, saying that he had already left to run the Olympics when Bain acquired GST Steel.

The Obama campaign is attempting to discredit Romney's economic credentials as the Republican candidate tries to paint himself as better prepared to deal with a struggling economy than President Obama.

Speaking about Ampad in Ohio last week, Vice President Joe Biden said, "Laying on debt, laying off workers, doing what is good for those at top while everyone else fends for themselves? We can't afford that in the nation."

The Obama campaign has received some pushback on his focus on Bain, even from some in his own party. On NBC's "Meet the Press" Sunday, Newark Mayor Cory Booker said the attacks on Bain Capital show that "we're getting to a ridiculous point in America."

The Romney campaign referenced Booker's remarks in its response to the new Obama video.

"President Obama continues his assault on the free enterprise system with attacks that one of his supporters, Newark Mayor Cory Booker, called 'nauseating' and a former adviser, Steven Rattner, called 'unfair,'" Romney campaign spokesperson Andrea Saul said in a statement. "Americans expected a different kind of politics from Barack Obama but, sadly, this is just more of the same failed politics that dominates Washington."