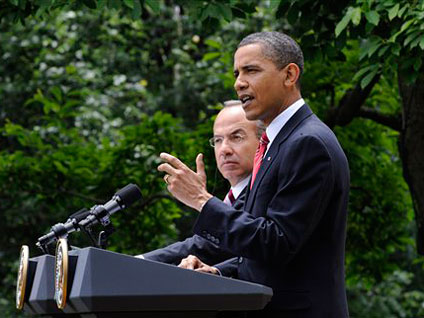 President Obama said today that he has directed the Department of Justice to take a "very close look" at Arizona's controversial immigration law and that he expects a report back "soon," after which the government will make a determination whether to legally challenge the law.

Mr. Obama, speaking following a bilateral meeting at the White House with Mexican President Felipe Calderon, said in the Rose Garden that the Justice Department is looking at the language of the law and its implications for civil rights as well as "whether it comports both with our core values and existing legal standards."

He added that Justice is looking at whether the law violates "the fact that the federal government is ultimately the one charged with immigration policy."

"I think the Arizona law has the potential of being applied in a discriminatory fashion," Mr. Obama said after a reporter asked if he agreed with Calderon's characterization of the law as "discriminatory." In his prepared remarks, the American president had called the law a "misdirected expression of frustration over our broken immigration system."

"Today, I want every American to know my administration has devoted unprecedented resources in personnel and technology to securing our border," he said. "Illegal immigration is down, not up, and we will continue to do what's necessary to secure our shared border."

At a welcome ceremony earlier in the day, Calderon spoke of migrant workers, saying "many of them, despite their significant contribution to the economy and to the society of the United States, still live in the shadows and, occasionally, as in Arizona, they even face discrimination."

Speaking of the Arizona law, Mr. Obama said "in the United States of America, no law-abiding person -- be they an American citizen, a legal immigrant, or a visitor or tourist from Mexico -- should ever be subject to suspicion simply because of what they look like."

He argued that while the law was amended to say it should not be carried out in a discriminatory way, a fair reading "indicates that it gives the possibility of individuals who are deemed suspicious of being illegal immigrants...being harassed or arrested."

He added that "the judgments that are going to be made in applying this law are troublesome."

The passage of the law, he said, reflects "some of the frustrations that the American people have had in not fixing a broken immigration system and, frankly, the failures of the federal government to get this done. I'm sympathetic to those frustrations."

The president said he believes most Americans are open to a comprehensive immigration reform plan that includes creating an orderly border, making sure businesses are following the rules and not "actively recruiting undocumented workers" in order to skirt laws and protections, and making sure there is accountability for those living in the United States illegally.

He said he believes illegal immigrants should be provided a path to citizenship, though they should "get to the back of the line" and be forced to pay a fine and back taxes to before they achieve it.

The president said he also believes they should learn English.

Noting that there are not sixty Democratic votes in the Senate to overcome a filibuster, the president said he needs Republican support to pass immigration reform.

"I need some help to get it done," said the president.

"I think all of us recognize that some of the pressures with respect to immigration just arise out of economics," he added. "People in Mexico are looking for opportunity, and they feel that they can make more money here in the United States. What we also have to recognize -- and I talked about this with President Calderon -- is every nation also has the right to secure its borders and make orderly decisions about who comes in and who comes out."