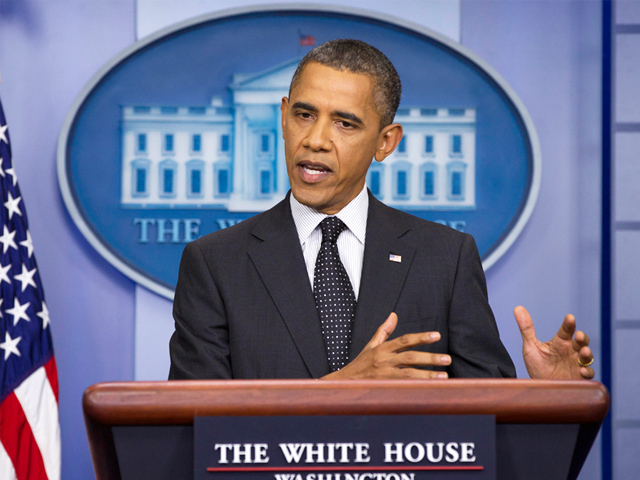 (CBS News) President Obama said Monday that his campaign's criticisms of Mitt Romney and other Republicans are not "out of bounds," arguing that it is the Romney campaign that has crossed the line with false attacks on him.

At his first news conference since June 19, Mr. Obama was asked by CBS News' Nancy Cordes if he was comfortable with the tone of his campaign. Cordes pointed to suggestions by the Obama campaign that there is something problematic with Romney's unreleased tax returns, the suggestion that he might have committed a felony, and an ad from a pro-Obama super PAC linking Romney to the death of a steelworker's wife.

Mr. Obama disputed the claim that his campaign had called Romney "a felon," as Cordes had put it. (Here's what deputy campaign manager Stephanie Cutter said: "Either Mitt Romney, through his own words and his own signature was misrepresenting his position at Bain to the SEC, which is a felony. Or, he was misrepresenting his position at Bain to the American people to avoid responsibility for some of the consequences of his investments. And if that's the case, if he was lying to the American people, then that's a real character and trust issue that the American people need to take very seriously.") The president added that he is stressing "sharp differences between myself and Mr. Romney" on the campaign trail, pointing to substantive differences on Wall Street reform, the health care law and tax policy.

"Now, you know, if you look at the overall trajectory of our campaign, and the ads that I have approved and are produced by my campaign, you'll see that we point out sharp differences between the candidates, but we don't go out of bounds," he said. "And when it comes to releasing taxes, that's a precedent that was set decades ago, including by Mr. Romney's father. And for us to day that it makes sense to release your tax returns, as I did, as John McCain did, as Bill Clinton did, as the two President Bushes did, I don't think is in any way out of bounds."

He added: "I think that is what the American people would rightly expect, is a sense that, particularly when we're going to be having a huge debate about how we reform our tax code and how we pay for the government that we need, I think people want to know that, you know, everybody has been playing by the same rules, including people who are seeking the highest office in the land. This is not an entitlement, being president of the United States, this is a privilege, and we've got to put ourselves before the American people to make our case."

Romney has released his 2010 tax returns and an estimate of his 2011 returns. Democrats want him to release at least five years of returns, and some have suggested the reason he is not doing so is because he did not pay taxes in previous years.

"This isn't sort of overly personal here, guys, this is pretty standard stuff," he said. "I don't think we're being mean by asking him to do what every other presidential candidate has done."

Cordes also pointed to the super PAC ad specifically, and asked Mr. Obama if he would repudiate it.

"I don't think that Governor Romney is somehow responsible for the death of the woman that was portrayed in that ad," he said. "But keep it mind, this is an ad that I didn't approve, I did not produce, and as far as I can tell has barely run. I think it ran once."

The president then compared that ad to a spot from the Romney campaign that falsely attacks Mr. Obama over welfare.

"You've got Governor Romney creating as a centerpiece of his campaign this notion that we're taking the work requirement out of welfare, which every single person here who's looked at it says is patently false," he said. "Right?"

"Not only are his super PACs running millions of dollars worth of ads making this claim, Governor Romney himself is approving this and saying it on the stump," he continued. "So the -- you know, the contrast, I think, is pretty stark. You know, they can run the campaign that they want. But the truth of the matter is you can't just make stuff up. That's one thing you learn as president of the United States. You get called into account. And I feel very comfortable with the fact that when you look at the campaign we're running, we are focused on the issues and the differences that matter to working families all across America, and that's exactly the kind of debate the American people deserve."

"It seems that the first victim of an Obama campaign is the truth," Romney said. He insisted that the president's claims that he will raise taxes on middle class Americans are false despite independent analyses that his tax plan would have to raise taxes if it is to be revenue neutral, as Romney has promised.