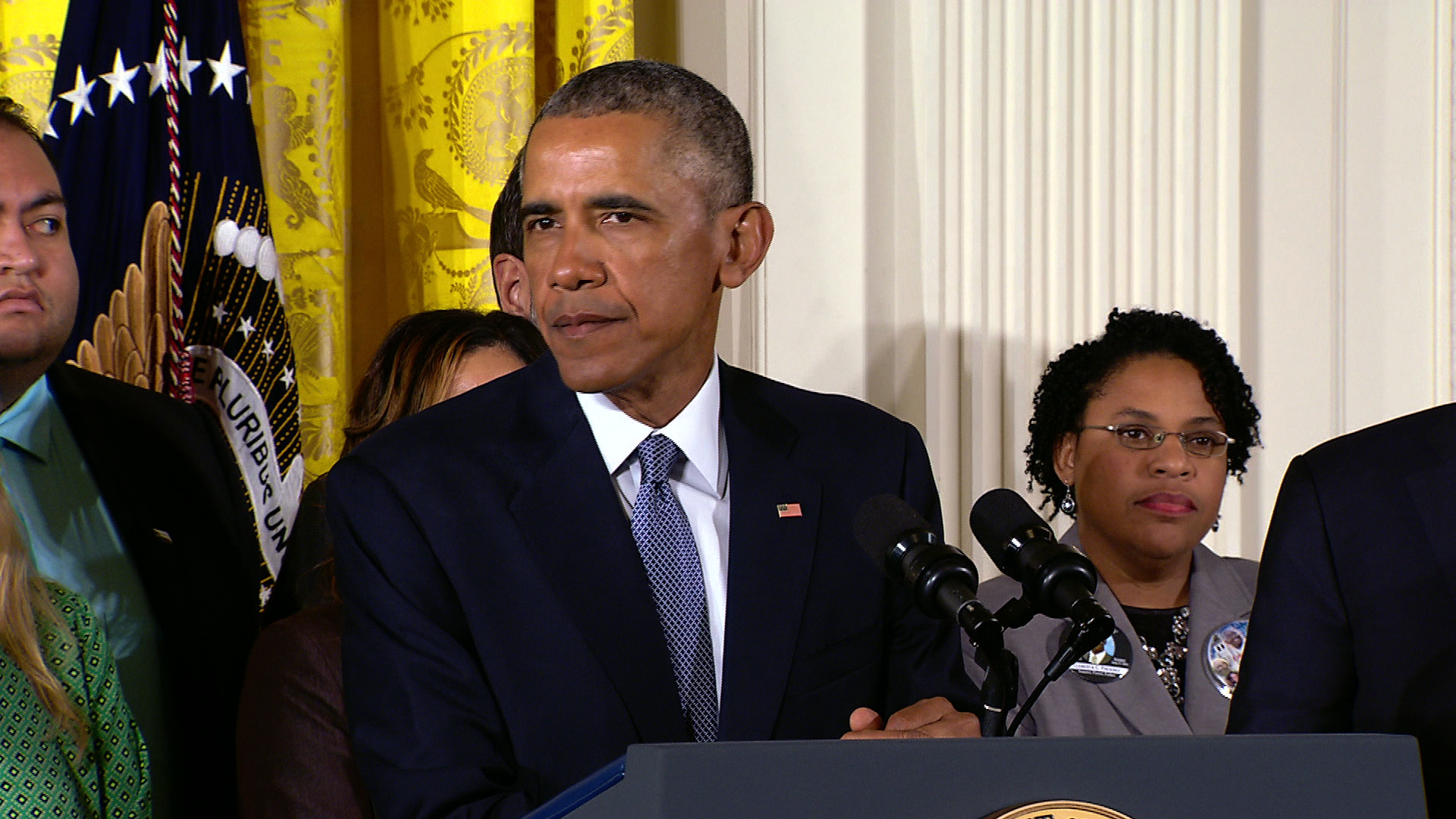 President Obama on Tuesday urged the country to tackle gun violence with more urgency, saying that executive actions won't undo the last mass shooting but can help stop the next one.

"We do have to feel a sense of urgency about it," the president said. "People are dying and the constant excuses for inaction no longer do."

In an emotional speech that lasted nearly 40 minutes, the president several times invoked mass shootings that have taken place in the last two decades, with special attention to the "too many" that had led him to address the nation during his presidency. He wiped tears from his eyes as he recalled the 2012 shooting at Sandy Hook Elementary School that left 20 children and six teachers dead.

"Every time I think about those kids, it gets me mad," he said.

The executive actions he outlined Tuesday will expand background checks during gun sales, beef up enforcement of existing gun laws, try to improve care for the mentally ill and information-sharing to prevent them from buying guns, and boost gun safety technology.

"Each time this comes up, we are fed the excuse that common-sense reforms like background checks might not have stopped the last massacre, or the one before that, or the one before that, so why bother trying? I reject that thinking," Mr. Obama said. "We know we can't stop every act of violence, every act of evil in the world. But maybe we could try to stop one act of evil, one act of violence."

Much of his speech was aimed at Republican lawmakers and the National Rife Association, who he blamed for consistently blocking legislation he said would have made Americans safer.

"The gun lobby may be holding congress hostage right now but they cannot hold America hostage. We do not have to accept this carnage as the price of freedom," Mr. Obama said.

House Speaker Paul Ryan, R-Wisconsin, said the president had never respected the Second Amendment and that his speech and his actions "amount to a form of intimidation that undermines liberty."

"No matter what President Obama says, his word does not trump the Second Amendment. We will conduct vigilant oversight. His executive order will no doubt be challenged in the courts. Ultimately, everything the president has done can be overturned by a Republican president, which is another reason we must win in November," Ryan said.

Several GOP presidential candidates have already pledged to undo the executive actions if they are elected in 2016.

To lawmakers who only call for improvements to the mental health system in the wake of a mass shooting perpetrated by someone with an illness, the president said, "Here's your chance to support these efforts, put your money where your mouth is."

His administration is also proposing a new $500 million investment to expand mental health treatment across the country.

He told Americans, "The reason Congress blocks laws is because they want to win elections and if you make it hard for them to win an election if they block those laws, they'll change course, I promise you."

The administration announced Monday that it would unilaterally attempt to close the so-called "gun show loophole" that allows gun dealers conducting business at gun shows or online without conducting background checks.

Existing law exempts gun collectors and hobbyists from conducting a background check before selling a firearm. However, Attorney General Loretta Lynch said to reporters Monday, "There's been an expansion of people claiming the exemption... when they really don't qualify for it."

The new guidance from the Bureau of Alcohol, Tobacco, Firearms and Explosives (ATF) announced Monday "puts in one place clear guidance... on who actually qualifies as a dealer," Lynch said. "It will help individuals who do want to comply and really do want to know the standards, and it will also put everyone else on notice that if they don't comply, there will be consequences."

The new ATF guidance and stepped up enforcement efforts were announced with a series of other executive actions the administration is taking as part of an ongoing effort to reduce gun violence. Though the president has been clear that the move is motivated by Congress' inaction on any further gun control legislation, he said after meeting with Lynch Monday that the new actions are "well within my legal authority."

The president was introduced by Mark Barden, whose son, Daniel, was among the children killed in Newtown, Connecticut . He is now the managing director at Sandy Hook Promise, the nonprofit organization run by several families affected by the shooting that aims to reduce gun violence.

The president was also accompanied by the widow of State Sen. Clementa Pinckney, the pastor at the Emanuel African Methodist Episcopal Church who was killed in a shooting at the Charleston, South Carolina church earlier thsi year.

Shortly after the mass shooting at an Oregon community college in early October, the president assigned White House and Department of Justice lawyers to comb the law in search of any unused administrative authority available to him.

Lynch insisted Monday that the new guidance on the gun show loophole sets "clear, definitive standards" for anyone who wants to sell firearms. However, the new guidance does not include a specific number of guns that must be sold to qualify as a dealer, since existing law does not specify a number.

However, court rulings have set a precedent that says a person could sell as few as one or two guns and still be considered a dealer, depending on the circumstances. For instance, Lynch explained, if an individual sells a gun clearly for profit, or if they buy and sell a gun kept in its original packaging, they may be considered a dealer.

"It's important to note the hobbyist and collector exception is still there," she said. Now, though, dealers can no longer "hide behind that."

The ATF will engage in a "business educational initiative" in the first part of 2016, Lynch said, to help gun dealers, hobbyists and collectors understand the new guidance. This effort will target gun shows, flea markets and online dealers. Lynch added, "We will be looking for those individuals who seek to avoid registering."

She added that the ATF is ramping up its enforcement efforts, particularly online. "If it does stop one act of violence, this effort will be worth it," she said.

To improve enforcement, the FBI aims to start processing background checks 24 hours a day, seven days a week. It also aims to improve its notification to local authorities when someone unlawfully attempts to buy a gun. The FBI wants to hire more than 230 additional examiners but eventually automate the background check process, administration officials explained Monday.

To beef up the information in the federal background check system, the administration is also reaching out to state leaders. Lynch sent a letter to all 50 governors, highlighting the importance of receiving complete criminal history records for the system. Additionally, the Health and Human Services Department (HHS) is notifying states that it can enter mental health information into the system without running afoul of privacy laws.

A CBS News poll taken in December found that concerns about mass shootings has not increased support for stricter gun laws: the percentage favoring stricter laws has dropped slightly since October. Now 51 percent of Americans think gun laws should be stricter, down from 58 percent. Most Democrats (76 percent) and half of independents (51 percent) think gun laws should be stricter, while most Republicans (59 percent) think they should be kept as they are.

Most Americans who do not own guns also think gun laws should be stricter (64 percent), while most who own guns think they should be kept as they are (50 percent) or made less strict (17 percent).