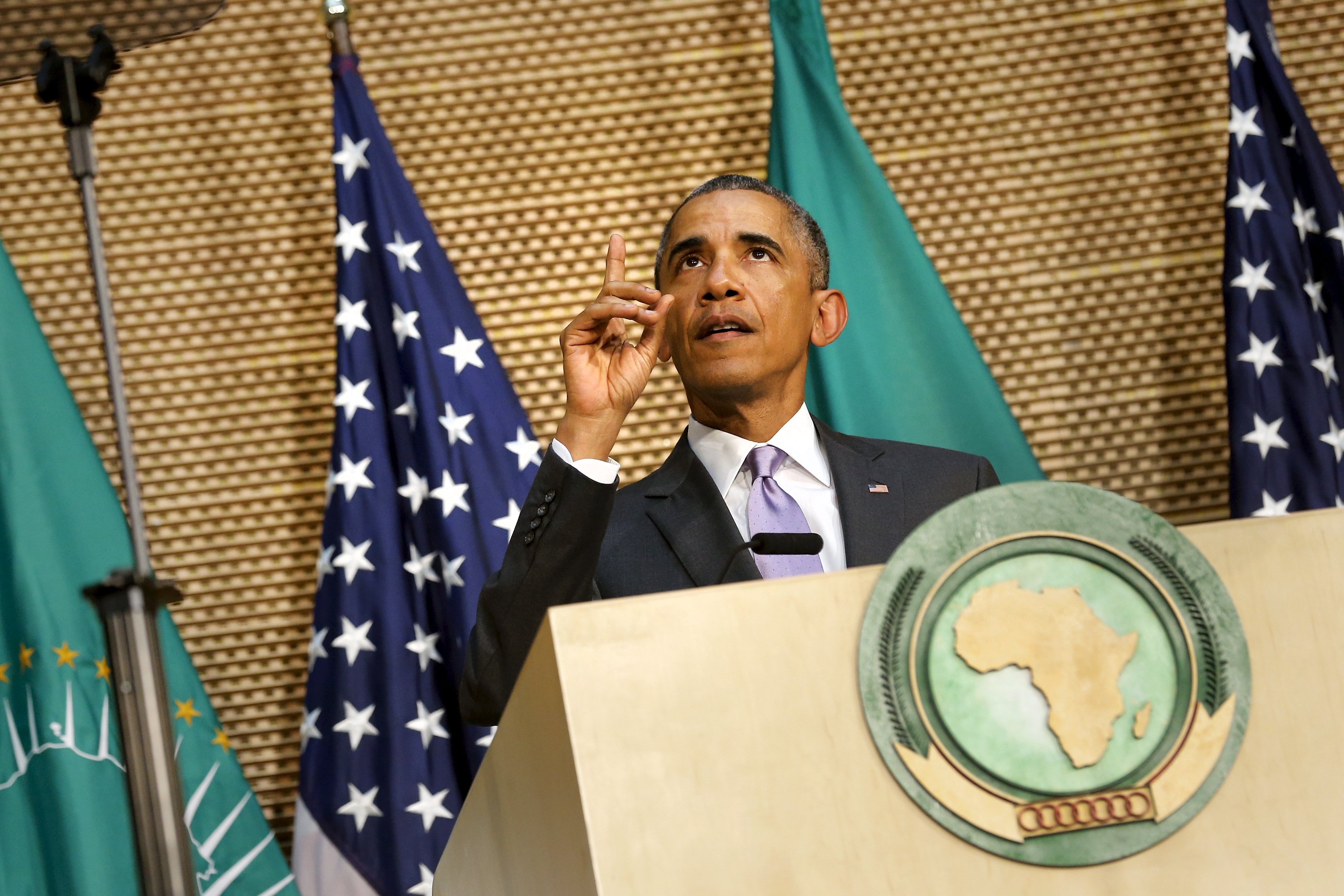 ADDIS ABABA, Ethiopia -- President Obama on Tuesday called on African leaders to address the "most urgent task" of creating jobs and opportunity for the next generation to avoid the risk of violent unrest as the population booms in the coming decades.

"We need only look to the Middle East and North Africa to see that large numbers of young people with no jobs and stifled voices can fuel instability and disorder," Mr. Obama said in a speech to the African Union (AU) Tuesday.

"A half century into this independence era, it is long past time to put aside old stereotypes of an Africa forever mired in poverty and conflict," Mr. Obama told Union representatives. "The world must recognize Africa's extraordinary progress. Today, Africa is one of the fastest-growing regions in the world. Africa's middle class is projected to grow to more than one billion consumers."

Mr. Obama became the first sitting American president to address the AU, capping off a five-day, two-nation tour of Africa. He began the trip last Friday in Kenya, the country where his father was born, and has spoken of how personal the trip is for him.

His speech outlined ways the U.S. is seeking to boost African growth by increasing trade and helping to build stronger public health systems, a need that became apparent during the Ebola crisis in West Africa last year.

He also pushed African leaders to make changes to help their economies, including making reforms that will enable trade within the continent and modernize customs and border crossings. And he said leaders must end "the cancer of corruption" to unlock Africa's economic potential.

"When someone has to pay a bribe just to start a business or go to school or to get an official to do their job -- that's not 'the African way,'" Mr. Obama said. "It undermines the dignity of the people you represent."

He also said that Africa's democratic progress is at risk from leaders who try to hold onto power after their terms end, and called on the African Union to ensure that leaders abide by their countries' constitutions.

"I have to be honest with you, I just don't understand this," Mr. Obama said. "The law is the law and no one person is above the law, not even presidents."

He acknowledged a desire to stay in office, saying, "I actually think I'm a pretty good president. I think if I ran again I could win."

Continuing a theme of his trip, the president spoke out on several human rights issues, calling free and fair elections, freedom of speech and press and freedom of assembly "the ingredients of real democracy."

"When journalists are put behind bars for doing their jobs, or activists are threatened as governments crack down on civil society, then you may have democracy in name, but not substance," Mr. Obama said. "Nations cannot realize the full promise of independence until they fully protect the rights of their people. This is true even for countries that have made important democratic progress."

He specifically mentioned Ethiopia, the location of the speech, saying the country "cannot unleash the full potential of its people" if it imprisons journalists or keeps legitimate opposition groups out of the political process.

Ethiopia released five bloggers who had been imprisoned on terrorism charges ahead of Mr. Obama's visit. Two of those bloggers, Edom Kassaye and Zelalem Kibret, told Garrett they were abused in prison.

"The bottom line is that when citizens cannot exercise their rights, the world has a responsibility to speak out, and America will, even if it is sometimes uncomfortable--and even when it's directed toward our friends," the president said Tuesday.

Mr. Obama also touched on women's rights, telling the assembled representatives that they cannot "let old traditions stand in the way." He said practices like genital mutilation, forced marriage and rape as a weapon of war must stop.

On security issues, promised to continue supporting Africans nations as they fight terror groups like al Qaeda, al-Shabaab and Boko Haram. But he said those issues must be matched by a commitment to good governance.

"Our fight against terrorist groups, for example, will never be won if we fail to address the grievances that terrorists exploit, if we don't build trust with all communities, and if we don't uphold the rule of law," he said.

Earlier Tuesday, the president highlighted the administration's efforts to combat hunger worldwide on Tuesday. He toured a plant operated by Faffa Foods, which participates in the U.S. Feed the Future program. The initiative focuses on helping smaller farmers in 19 countries, including Ethiopia and 11 other African nations, grow their businesses.

Faffa, in the Ethiopian capital, is the chief supplier of baby food for children in Ethiopia, where child malnutrition is a serious problem.

Mr. Obama said the "huge percentage" Africans who still get their income from agriculture can improve their yields with a few interventions. He said a woman he met at the factory had increased her yield threefold, providing enough money for her to buy a cow and send her children to school.

He said Feed the Future "is making a difference in some very concrete ways."

Susan Rice, Obama's national security adviser, said the AU takes the lead on an array of global issues, including peace and security, health and agriculture. The president wanted to address the continent via the AU because the U.S. has come to work closely with the union on many of these issues.

The president also met one on one with Nkosazana Dlamini Zuma, chairperson of the African Union Commission. She was among regional leaders Mr. Obama met with Monday to discuss the civil strife in neighboring South Sudan.

The president flew to the Kenyan capital of Nairobi to attend a U.S.-sponsored business development summit, but the trip was also a homecoming of sorts. The country considers Mr. Obama a local son and Kenyans have been waiting years to welcome him back as president of the United States. Many lined the streets in Kenya, as well as in Ethiopia, to watch his motorcade drive by.

The president also reconnected with relatives on his father's side of the family, including his sister, Auma Obama, and a grandmother.

At both stops, Mr. Obama challenged the country's leaders to clean up their governments to attract business investments.

He also pressed them to respect and uphold human rights, including gay equality, and basic democratic freedoms.

He arrives back in Washington early Wednesday.