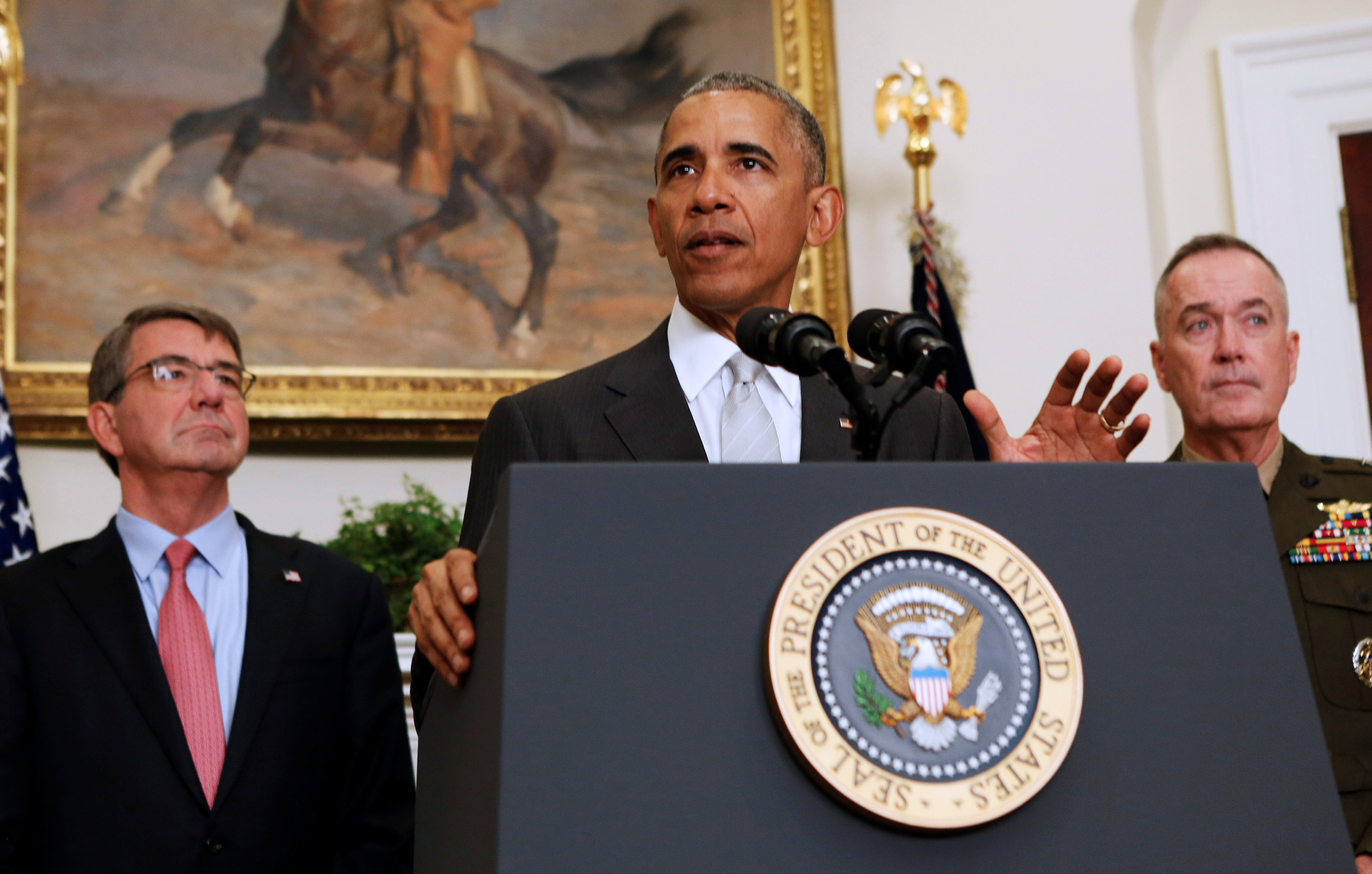 President Obama announced Wednesday a 14 percent drawdown of U.S. forces in Afghanistan, telling reporters that about 8,400 American troops will remain in the country at the year's end -- a higher number than the 5,500 he had hoped to have in Afghanistan by the end of his presidency.

"The security situation in Afghanistan remains precarious. Even as they improve, Afghan security forces are still not as strong as they need to be," Mr. Obama said from the White House's Roosevelt Room, noting that "the Taliban remains a threat."

"As president and commander-in-chief, I've made it clear that I will not allow Afghanistan to be used as a safe haven for terrorists to attack our nation again," he added, saying that "it is in our national security interests" continue supporting the Afghan security forces.

The United States, then, would "maintain approximately 8,400 troops in Afghanistan into next year through the end of my administration," the president said.

"Even as we've maintained a relentless case against those threatening us, we are no longer engaged in a major ground war in Afghanistan," Mr. Obama said, pointing out that "fewer than 10,000" troops remain in the region to focus on the "narrow missions" of training and advising Afghan forces in counterterrorism efforts.

"But even these narrow missions continue to be dangerous," he added.

The original plan, notes CBS News National Security Correspondent David Martin, was to have 5,500 troops remaining in Afghanistan going into 2017 -- with most or all of them as Kabul-based advisers to the Afghanistan military. Now, Martin says, there will be U.S. troops not just in Kabul and at the nearby air base of Bagram, but also in Kandahar to the south, and in Jalalabad to the east, and there will continue to be U.S. forces flying air strikes against the Taliban.

In addition to Taliban forces, the Haqqani network is operating in Afghanistan, as well as al Qaeda, and ISIS has also appeared there. There are a variety of threats the Afghan army cannot fight alone, given challenges in logistics and in intelligence gathering.

Mr. Obama also directly addressed Taliban leaders, saying the extremist group has been unable to prevail, that Afghan Security Forces continue to grow stronger and that the U.S. commitment to the region's stability will endure.

With the announced troop numbers, the president said his successor would be left a solid foundation to stand on when they take office in January. He noted the adjustment in troop levels was based on reviews conducted by Lt. Gen. John Nicholson, the new U.S. commander in Afghanistan, and other key officials.

Afghan President Ashraf Ghani praised the announcement with a tweet from his office declaring that the it's a "sign of continued partnership between our nations."

Arizona Sen. John McCain, the Republican chairman of the Senate Armed Services, lauded the president's decision to "reverse his previous plan to drawdown U.S. forces in Afghanistan" but also questioned the removal of 14 percent of the troops.

"While I believe conditions on the ground warranted retaining the current force level, the decision to retain 8,400 U.S. troops in Afghanistan into next year is certainly preferable to cutting those forces by nearly half," McCain said in a statement Wednesday. "That said, when the President himself describes the security situation in Afghanistan as 'precarious,' it is difficult to discern any strategic rationale for withdrawing 1,400 U.S. troops by the end of the year."

The president was joined by Secretary of Defense Ash Carter and Chairman of the Joint Chiefs of Staffs Gen. Joseph Dunford.

Earlier this month, Carter reportedly told NATO allies that the U.S. was reconsidering the level of its troop drawdown, given the resurgence of the Taliban.

The last time Mr. Obama gave a statement on Afghanistan from the White House, he announced that the U.S. would slow the pace of its troop draw-down in the country.

"While America's combat mission in Afghanistan may be over, our commitment to Afghanistan and its people endures," the president said in October of last year. "I will not allow Afghanistan to be used as a safe haven for terrorists to attack our nation again."

In October, Mr. Obama said that American troops -- approximately 9,800 of them -- would remain on the ground to stick to a "narrow but critical" mission of training Afghan forces to fight terrorism in the region.

The president is heading to NATO Thursday to discuss the military presence in Afghanistan with coali‎tion partners.