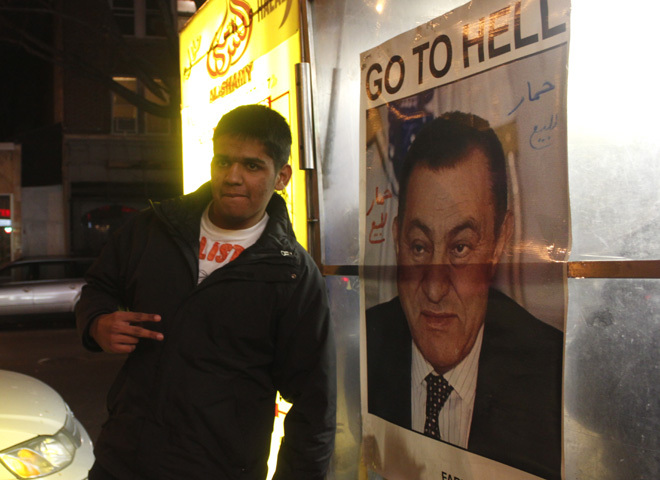 QUEENS, N.Y. - They came from Cairo, Alexandria, Sharm el Sheikh and Port Said, most of them more than a decade ago, immigrants seeking a better life for themselves in America.

On Friday night, they gathered in their Queens neighborhood and rejoiced over the fall of Hosni Mubarak, and talked of a better life for the family and friends they had left behind in Egypt.

In New York' s "Little Egypt," between Astoria Boulevard and 28th Avenue, they rode down Steinway Street past the smoke-filled hookah cafes honking horns and waving their red, white and black flags as if Egypt had just won the World Cup.

Ahmed Shafei, 30, of Queens, exhaled and smiled widely through a cloud of smoke as he described the joy he felt for Egyptians.

Shafei came here 15 years ago from Cairo with his family and is pursuing his executive MBA at Baruch College.

"The last time I went to Cairo in 2009, it was so chaotic, it took me three days to figure out how to safely cross the street," Shafei said. "There was corruption everywhere. Now I have hope that things will get much better."

Egypt: The Road Ahead - Complete Coverage

Across the street from El Khayam, at After 8, a swanky hookah lounge, twenty-something Egyptian immigrants gathered outside, giddily hugging and taking photos while holding little Egyptian flags.

Inside, young men and women swayed to the sounds of Egyptian belly dance.

Yousra Elsehetry, 25, came to After 8 to celebrate with her fellow Egyptians. She left Cairo with her family at the age of 3, and now teaches at the Al Noor Islamic School in Brooklyn.

"Today was an incredible day. The students were chanting, 'Egypt!, Egypt!' and banging the desks when we heard about Mubarak," Elsehetry said.

"And then one student said, 'Who's next?' Our assistant principal, who is from Yemen, shouted 'Yemen!' And we continued drumming on the desks chanting, 'Yemen, Yemen, Yemen.'"