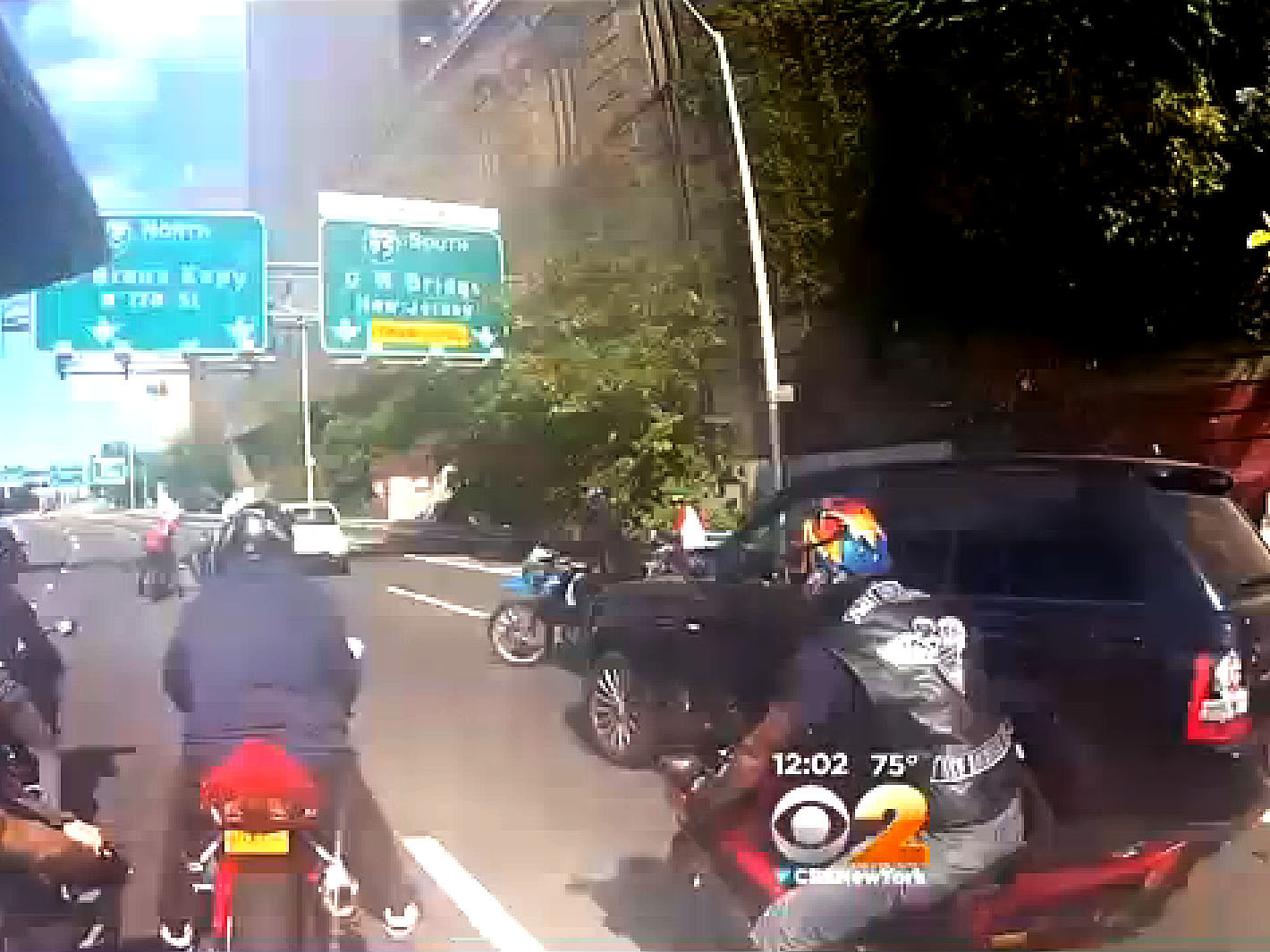 (CBS News) An NYPD undercover detective has now been arrested in connection with an attack on a family in an SUV by a group of motorcyclists, reports CBS News' John Miller.

The officer is expected to be charged with criminal mischief for allegedly banging on and breaking the rear window of the SUV. The detective waited four days before coming forward to the NYPD and he allegedly made false statements about his involvement, reports Miller.

The AP identified the officer as Wojciech Braszczok, and said he turned himself in to face riot and criminal mischief charges. He was expected to make a court appearance Wednesday.

In other news, there is new video of a road rage attack in New York City in which several men appear to be kicking the driver of an SUV while he laid on the ground. Police say Alexian Lien was pulled out of his vehicle. Another man is seen stepping in to stop the assault.

A fourth suspect has been charged in the incident. And now, the man who shot the original video sparking the outrage is breaking his silence.

It was supposed to be a leisurely Sunday ride through New York City. Some in this group of motorcycles were intentionally slowing down other cars on the road so that the rest of them could pass safely.

Kevin Bresloff turned on his helmet camera shortly after the riders encountered the black Range Rover, says his lawyer, Andrew Vecere. "From speaking to him, what he saw - or what he believes that he saw was a water bottle come out of the sunroof of the car," Vecere said.

Asked he is referring to the SUV -- and if someone threw it -- Vecere said, "Yes, correct."

What happened next is not in dispute. First there was a collision, and then a confrontation. Suddenly, the black Range Rover peels off, hitting some of the riders. A chase ensues, until the SUV -- now with its tires slashed -- gets stuck in traffic. Some riders attack the vehicle and eventually its driver, but that part isn't captured on Bresloff's video.

Vecere said he and his client "categorically deny that he in any way tampered with the video."

"It's a shame. But that's when it died. The battery just stopped working, there's not more footage," he told CBS News' Miller.

Bresloff told "CBS This Morning, "based upon the sole fact that I ride a motorcycle, the public has decided that I am a thug or gang member. This is simply not true. I was a spectator of these unfortunate events that occurred."

Vecere said, "I believe he thought that he was still rolling [film on the attack]. From speaking to him, it happened so quickly. In other words, it was shocking, terrifying, never expected this to happen at all. And literally was just documenting it like he documented it from the beginning to the end. In other words, 'I'm taping it' originally was, 'I want the police to see that this man hit a motorcycle, ran over motorcycle riders'."

Bresloff is not being treated like a suspect, Miller added on "CBS This Morning." He is considered a witness and he doesn't expect to face any charges. And it's important to note his video is not the only one in this case. The chain of events was captured on surveillance cameras, highway cameras, and the cell phones and iPads of other bystanders.

Asked what he makes of Bresloff, Miller said on "CTM," "I took him through his story. He seems like a guy who has fallen into this thing way over his head. I don't think he expected this to -- he shot that video and uploaded it to YouTube because that's how he handles his video. It had 400,000 hits in the morning -- it's now 6 or 7 million now. This was not what he thought was going to happen here."

Turning to the matter of Vecere's statements that the video went out at that moment, Miller said it begs the question, but added that police have executed a search warrant at Bresloff's home for his computers and other materials and there is no indication that more video of the incident exists.

"There are two other police officers who were in the ride," Miller said. "So the police department has not actually sat down and done the Q and A with all of them. So this picture is unfolding more slowly than investigators would like."

For more on the ride, watch Miller's full report and analysis above.