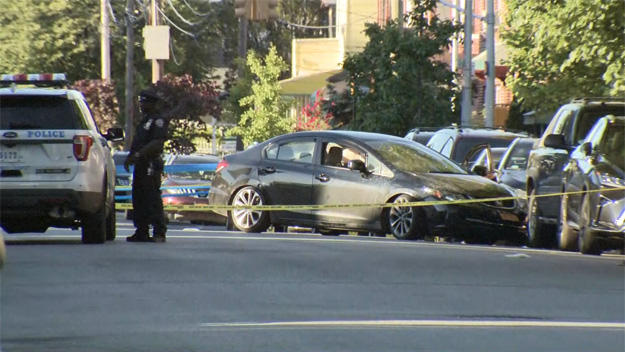 NEW YORK -- An NYPD officer underwent surgery Sunday, after officials said he was struck and dragged by a hit-and-run driver in East Flatbush, Brooklyn.

CBS New York cites authorities who said Officer Dalsh Veve was in critical condition at NYC Health + Hospitals/Kings County Sunday morning. A 15-year-old suspect was left in serious condition with a gunshot wound to his face.

Mayor Bill de Blasio said Sunday afternoon that Officer Veve was fighting for his life at the hospital.

"This is a young man who has had an exemplary career over the last nine years as an NYPD officer -- one of the most commended and decorated members of his precinct," de Blasio said.

Hours later, the 88th Precinct tweeted a photo of the officer, saying he was recovering from surgery.

"I said, 'I think that's fireworks.' After that, a few seconds, we started seeing cop cars running around like they were searching for someone," East Flatbush resident Dasean Bethea said.

Officer Veve was across the street speaking to the three occupants of a black Honda sedan in front of a fire hydrant, O'Neill said. That's when the 15-year-old behind the wheel hit the gas, police said.

The vehicle was left abandoned on Snyder Avenue and 53rd Street and the occupants escaped, O'Neill said. The sedan was reported stolen from Valley Stream several days ago, police said.

Veve was rushed to the hospital, O'Neill said. Shortly afterward, a 15-year-old suspect walked into Brookdale University Hospital Medical Center with a gunshot wound, he said.

"At this time, we believe that suspect was in the vehicle that dragged police Officer Veve," O'Neill said.

Police said four people, including the 15-year-old, were being questioned Sunday night. No charges have been filed.

It appeared that Veve was able to fire his service weapon twice while being dragged, O'Neill said.

Veve is a 9-year veteran of the NYPD, police said.

"Once again, we're standing in the hallway of a hospital for a heroic police officer that went out while we were sleeping, went out in the street to make sure there's not gun violence on our street; to make sure we can wake up in the morning in safety," Patrolmen's Benevolent Association President Pat Lynch said. "But because he was willing to do that with his life, he wasn't safe, and now he's injured."

"Please think of these police officers. They go out there on the street and put themselves at risk," Lynch added. "And those police officers that came to his aid and heroically lifted him up and got him here."

De Blasio noted that Veve was reporting to a call of shots fired and went to the scene to protect his fellow New Yorkers.

"This is another example of the risks our officers face every day, and this example has to do with the fight against crime," de Blasio said.

The mayor called off a rally for his reelection campaign in the wake of the incident, according to the Mayor's campaign office.

De Blasio has met with the officer's family and was praying for a recovery, according to the Mayor's office.

Family friends said the 35-year-old moved from Haiti to the United States when he was just a young boy. He now lives in North Baldwin, Long Island with his wife and 2-year-old daughter.

His neighbors are praying he'll pull through.

"It is great to have a neighbor like him. You couldn't ask for more," Enzo Gioia said.

"He is so fabulous, that I just hope that he is going to be OK," a woman added.