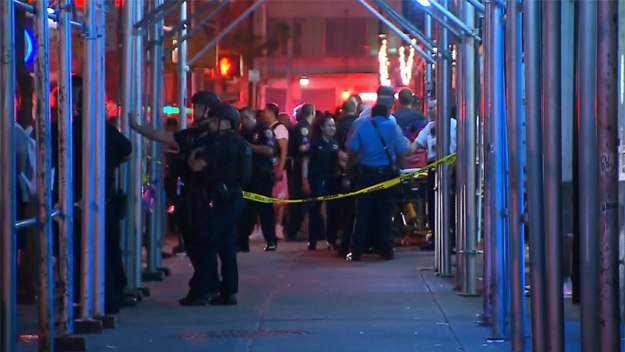 It happened around 10:15 p.m. at Irving Plaza, near Manhattan's Union Square.

A 34-year-old man was shot in the chest, a 33-year-old man in the abdomen and a 26-year-old woman in her left leg, police told WCBS. All were taken to local hospitals, and one of the men died, Manhattan South Chief of Detectives William Aubrey told the station. One of the victims was in critical but stable condition on Thursday, reports the AP.

Hip-hop artist T.I. was headlining a concert at the venue at the time, but Maino and Uncle Murda were performing when the gunfire erupted, Aubrey said.

Detectives were still interviewing potential witnesses early Thursday, as well as canvassing video and looking for cameras in the area to identify witnesses, Aubrey said, adding that no one was in custody.

Many people panicked, according to video posted to Twitter after shots rang out.

"It was about to go on. We saw, like, two people up on the VIP arguing, and then everybody started running because they heard the shots," one woman told WCBS. "It was terrifying. We just kept running with everybody else because they were running for their lives, so we just started running, and I fell, and I got stomped on a little bit. My shoe came off."

"We had no idea where it was coming from, so we just were running out for the exit, you know, anywhere we possibly could," a man added.

Representatives for T.I., whose real name is Clifford Joseph Harris Jr., referred all questions about the shooting to police. In 2006, shots were fired at a show he performed in Cincinnati, and leaving friend and personal assistant Philant Johnson dead.