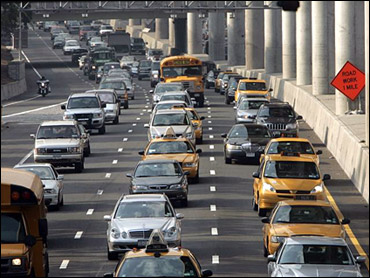 Get the (expletive) out of the way, Miami.

New York City is now the new road rage capital of the United States, according to an annual survey released Tuesday.

Miami had taken the title the previous three years. New York was ranked third in the 2008 survey. Following the Big Apple in 2009 are: Dallas/Fort Worth, Detroit, Atlanta and Minneapolis/St. Paul, according to AutoVantage.

Portland, Ore. was labeled the most courteous city, with Cleveland, Baltimore, Sacramento and Pittsburgh also in the top five.

Careless driving, such as tailgating or talking on cell phones, impatient and inconsiderate drivers were among the top reasons respondents said caused road rage.

The survey was conducted over telephone between Jan. 8 and March 24, 2009 and encompasses the responses of 2,518 participants. The margin of error is +/- 2 percent, according to AutoVantage.