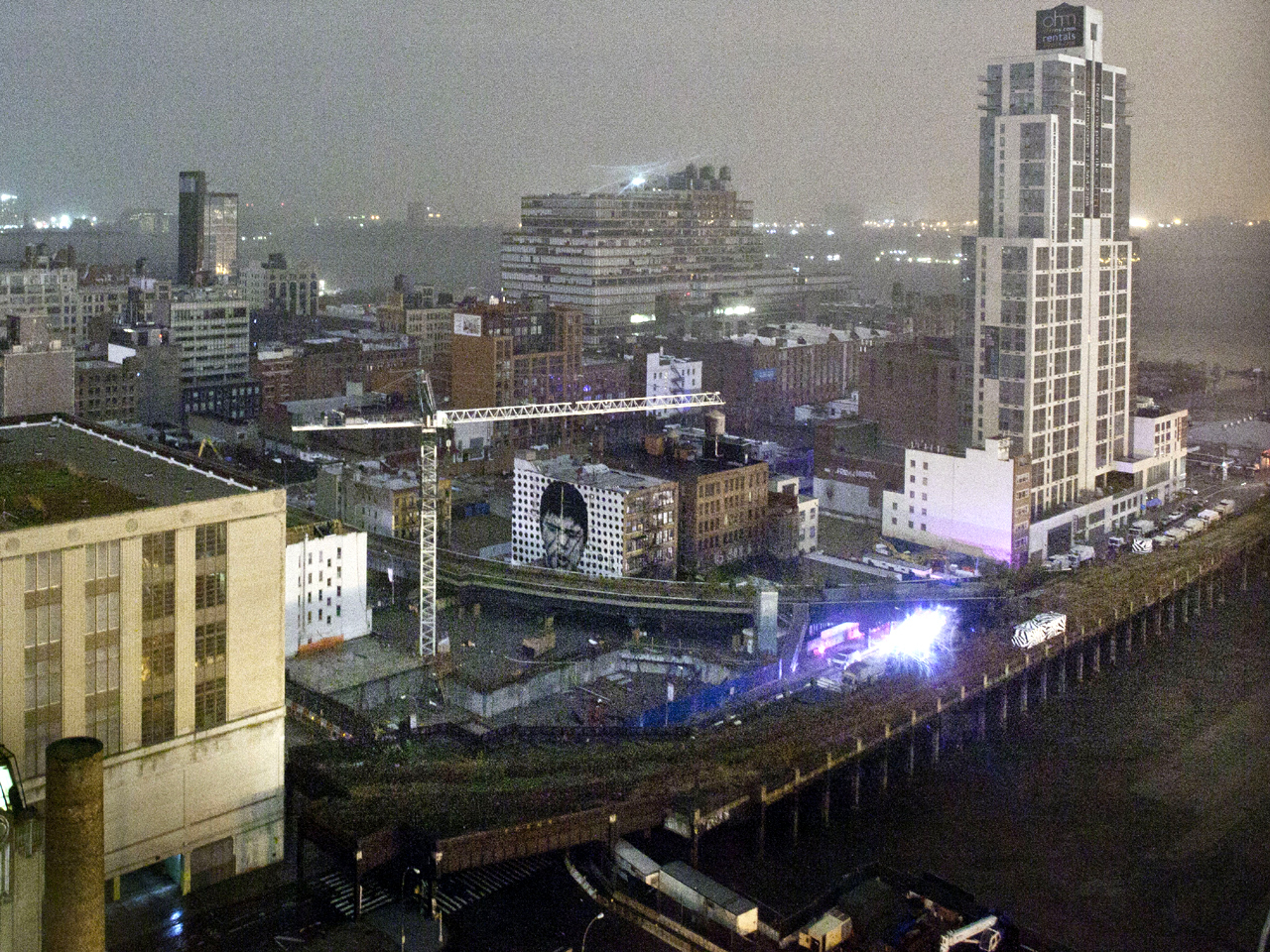 New York The nation's largest city began to pick up the pieces Tuesday after superstorm Sandy deluged lower Manhattan and Brooklyn, devastated the subway system and left hundreds of thousands without power.

Sandy's wrath was felt up and down the East Coast, causing dozens deaths before continuing its path inland with the potential to cause even more havoc.

A man in Queens and a couple in Brooklyn were killed by falling trees. One woman may have died when she stepped in a puddle that hid an electrical line. Others either drowned or were found dead in a home or car. Bloomberg said at least one person drowned in a home.

"This was a devastating storm, maybe the worst that we have ever experienced," he said, offering no firm timetable on when power or subway service would be restored.

Scenes of the damage were everywhere. Between 80 and 100 flooded homes in Queens caught fire and were destroyed. A hospital removed patients on stretchers and 20 babies from neonatal intensive care, some on respirators operating on battery power.

Sidewalks, streets and subways usually bustling with crowds and traffic jams emptied for a time. And high above midtown, the broken boom of a crane continued to dangle precariously over a neighborhood.

"Oh, Jesus. Oh, no," said Faye Schwartz, 65, Tuesday morning as she surveyed the damage in her Brooklyn neighborhood, where cars were strewn like leaves, planters were deposited in intersections and green Dumpsters were tossed on their sides.

MTA officials told WCBS Monday that the process of pumping water out of the tunnels could take up to four days. Salt water could corrode the switches and signals in the system, which would force the MTA to replace hundreds of pieces of equipment before any service could be restored.

"We have no idea how long it's going to take," spokeswoman Marjorie Anders said.

Officials began to assess the damage to the nation's largest subway system Tuesday. All 10 tunnels in lower Manhattan, which connect the borough to Brooklyn and parts of Queens were flooded in what MTA chairman Joe Lhota told WCBS-TV was the "most devastating" event in the history of the system.

On its website, MTA states: "In the period of a few hours, seven East River subway tubes, two Long Island Rail Road tubes linking Manhattan with Queens and two vehicular tunnels were inundated by a wall of water, along with one subway bridge, three subway yards and six bus depots."

Pumping was underway but workers ultimately will have to walk all the hundreds of miles of track to inspect it, she said, and it wasn't clear how long that would take. Trains had been moved to safety before the storm.

The breadth of the damage was "unimaginable," Lhota said. As officials assess the damage, Lhota said it's likely that the subway system would be brought back online in pieces, not altogether.

Additionally, Sandy forced the closure of all bridges and tunnels to the island of Manhattan for a time. On Tuesday afternoon, Gov. Andrew M. Cuomo announced that "five of the MTA's seven bridges, the Robert F. Kennedy, Verrazano-Narrows, Bronx-Whitestone, Throgs Neck and Henry Hudson bridges, were fully inspected and reopened at noon. The two Rockaway bridges, Cross Bay Veterans Memorial and Marine Parkway-Gil Hodges bridges, and the Hugh L. Carey and Queens Midtown Tunnel remain closed."

At 5 p.m. Tuesday, partial bus service was expected to be restored in parts of the city.

The storm was once Hurricane Sandy but combined with two wintry systems to become a huge hybrid storm whose center smashed ashore late Monday in New Jersey. New York City was perfectly positioned to absorb the worst of its storm surge -- a record 13 feet.

The surge was so powerful , in fact, that water from the Hudson River, on Manhattan's west coast, flooded the Brooklyn-Battery Tunnel, on the borough's eastern edge, and ended up inundating Brooklyn, Lohta said.

"We knew that this was going to be a very dangerous storm, and the storm has met our expectations," Bloomberg said. "This is a once-in-a-long-time storm."

Bloomberg said it could be two or three days for power to be fully restored but offered no further specifics.

"This will be one for the record books," said John Miksad, senior vice president for electric operations at ConEdison. "This will be the largest storm-related outage in our history."

New York University's hospital lost backup power, Bloomberg said. Late Monday, an explosion at a substation at 14th Street and FDR Drive contributed to the outages. No one was injured, and ConEd did not know whether the explosion was caused by flooding or by flying debris.

The underground power lines that deliver electricity to much of New York City are much less vulnerable to outages than overhead lines because they aren't exposed to wind and falling trees or branches. But when damaged, they are harder to repair because the equipment is more difficult to access.

If substations are flooded while in operation, the equipment will fail and need to be replaced. If they are shut down in advance, workers can more quickly power up the machinery and restore service after floodwaters have receded.

After two backup generators failed, New York University's Tisch Hospital began evacuating more than 200 patients to other facilities, including 20 babies from neonatal intensive care, some of them on respirators operating on battery power.

Without power, the hospital had no elevator service, meaning patients had to be carefully carried down staircases.

And stock trading will be closed in the U.S. for a second day Tuesday -- the first time the New York Stock Exchange will be closed for two consecutive days due to weather since 1888, when a blizzard struck the city.

In Queens, nearly 200 firefighters tried to contain an enormous blaze that consumed more than 80 homes in the Breezy Point neighborhood. They had to use a boat to make rescues and climbed an awning to reach about 25 trapped people, firefighters told WABC-TV.

The neighborhood sits on the Rockaway peninsula jutting into the Atlantic Ocean. Officials weren't immediately able to pin down the cause of the blaze.

WCBS reports nine people have been arrested for allegedly stealing from businesses near the Rockaways in Queens during and after Sandy.

Three people were arrested at a gas station, three at a Radio Shack, and two at a clothing store.

The rains and howling winds, some believed to reach more than 95 mph, left a crane hanging off a luxury high-rise in midtown Manhattan, causing the evacuation of hundreds from a posh hotel and other buildings. Inspectors were climbing 74 flights of stairs to examine the crane hanging from the $1.5 billion building.

Bloomberg said Tuesday that building inspectors had determined the crane was stable, but efforts to repair the mechanism would have to wait until the wind and weather clear further.

The facade of a four-story Manhattan building in the Chelsea neighborhood crumbled and collapsed suddenly, leaving the lights, couches, cabinets and desks inside visible from the street. No one was hurt, although some of the falling debris hit a car.

At a darkened luxury high-rise building called the William Beaver House in Lower Manhattan, resident manager John Sarich was sending up porters with flashlights up and down the 47 flights of stairs to check on residents.

He said most people stayed put despite calls to evacuate. One pregnant woman in the building started having contractions, and Sarich said that before the power went out, he nervously researched how to deliver a baby on the Internet.

"I said, `Oh boy, I'm in trouble,'" Sarich said. The woman managed to find a cab to take her to a hospital.

Uptown in Chelsea, the city's thriving gallery district was under waist-high water the night before.

Reggie Thomas, a maintenance supervisor at a prison located within striking distance of the overflowing Hudson River, emerged from an overnight shift there, a toothbrush in his front pocket, to find his 2011 Honda with its windows down and a foot of water inside. The windows automatically go down when the car is submerged to free drivers. It left his car with a foot of water inside, and unable to start.

"It's totaled," Thomas said, with a shrug. "You would have needed a boat last night."

The doors of the Fairway grocery store were blown out. Several cars left in the parking lot were shifted by flood waters overnight and were left crammed door to door.

Schwartz and her husband rode out the storm on the third floor of the residences above the Fairway and said white-capped flood waters reached at least 3 feet around the building.

"It was scary how fast the water came up," she said.

On Tuesday, the New York Stock Exchange was again — the first time it's been closed for two consecutive days due to weather since 1888, when a blizzard struck the city. But the exchange will be opened Wednesday, officials said.

On coastal Long Island, floodwaters swamped cars, downed trees and put neighborhoods under water as beachfronts and fishing villages bore the brunt of the storm. A police car was lost rescuing 14 people from the popular resort Fire Island.