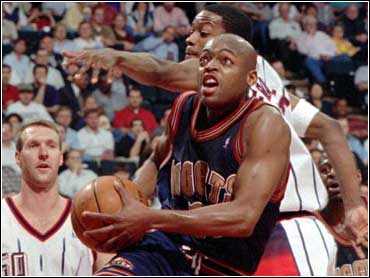 Nick Van Exel didn't have much of a second half. After what he did in the first two quarters, he didn't need one.

"We got a big lead early. I just wanted to put them away," Van Exel said after he scored 21 of his 23 points in the first half to lead the Denver Nuggets to a 106-97 victory over the Houston Rockets on Thursday night.

Van Exel hit nine of 17 shots from the field in the first half as the Nuggets managed a 61-37 lead at the half.

The Rockets were never closer than nine in the second half.

George McCloud added 17 points, followed by Tariq Abdul-Wahad with 14, Chris Gatling with 13 and Bryant Stith with 12.

Cuttino Mobley led Houston off the bench with 24, followed by Shandon Anderson with 14.

Francis was ejected from the game with 3:09 left in the third period after a flagrant foul on Abdul-Wahad as he drove to the basket.

"Those things are so hard to call. You never want to see anyone get hurt," Houston Coach Rudy Tomjanovich said.

"It looked to me like Steve made an attempt to block the shot, but his momentum moved him into the player. I'm glad that Tariq sn't hurt. It looks like Steve got the worst of it," Tomjanovich added.

Van Exel scored 12 first-quarter points, including eight in the first 3:35 of play.

"Nick really got us going and got us into the transition game," Antonio McDyess said. "He was really pushing the ball up the court when they missed a shot."

Houston managed a 13-12 lead with 5:47 left in the first period. Denver then outscored the Rockets 11-2 to move ahead 25-15 with 2:47 left in the quarter. 3-pointers by McDyess and Mccloud in the final minute of the period boosted the Nuggets to a 34-21 advantage going into the second period.

Van Exel added nine more second period points as the Nuggets continued their domination with a 17-0 run for a 53-27 lead with 5:01 remaining in the half.

A pair of late baskets by Van Exel gave Denver a 61-37 lead at the half.

Houston had a brief third period rally, outscoring Denver 14-2 to open the quarter to cut the Nuggets lead to 63-51.