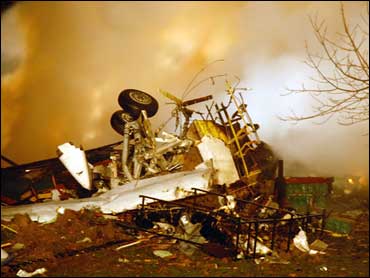 The crew of a commuter plane that fell out of the sky, killing all 49 people aboard and one person on the ground, noticed significant ice buildup on the wings and windshield just before the plane began pitching and rolling violently, investigators said Friday.

Officials stopped short of saying the ice buildup caused Thursday night's crash and stressed that nothing has been ruled out. But ice on a plane's wings can interfere catastrophically with an aircraft's handling and has been blamed for a number of major air disasters over the years.

Still, a readout of the plane's black boxes shows the plane was operating normally until the moment the crew deployed the wingflaps and landing gear six miles from the airport, reports CBS News correspondent Nancy Cordes.

Continental Connection Flight 3407 from Newark, N.J., went down in light snow and fog late Thursday and crashed into a house in suburban Clarence. Killed were 44 passengers, four crew members, one off-duty pilot and one person on the ground.

Two others escaped from the home, which was engulfed in a dramatic fireball that raged higher than the treetops and burned for hours. Bodies still could not be recovered hours later.

The flight recorder revealed that just after the control tower lost contact with the plane, the crew talked of significant ice buildup on the windshield, and the leading edge of the wing - despite the de-ice switch being on, reports CBS News correspondent Jeff Glor.

"What ice does, it disrupts the air flow of the wing. And if you lose your lift on your wing, you're not flying," said Peter Goelz, a former director with the NTSB.

The plane went through a "severe pitch and roll" experience after positioning its flaps for a landing, said Steve Chealander, spokesman for the National Transportation Safety Board.

Doug Hartmayer, a spokesman for Niagara Frontier Transportation Authority, which runs the airport, said: "The plane simply dropped off the radar screen."

The twin turboprop Bombardier aircraft was set to take off from Newark at 7:10 PM - but because of high winds it didn't leave until 9:18, reports Glor. The flight to Buffalo is a route Continental flies 47 times a week.

No mayday call came from the pilot before the crash, according to a recording of air traffic control's radio messages. Neither the controller nor the pilot showed concern that anything was out of the ordinary as the airplane was asked to fly at 2,300 feet.

Asked about the deicing system on the Q400, Bombardier spokesman John Arnone told CBS News: "The Q400 is fitted with a pneumatic de-ice boots system, the selection of which is required on initial detection of ice. It then remains in the 'on' position until the aircraft is cleared of icing conditions." He added that "a light in the cockpit provides the warning (to the flight crew of icing conditions)."

Arnone stressed that Bombardier is not speculating about whether icing caused the crash.

Federal investigators recovered the black box recorders from the smoldering wreckage Friday and returned them to Washington. The 74-seat Q400 Bombardier aircraft, in the Dash 8 family of planes, was operated by Colgan Air, based in Manassas, Va. Colgan's parent company, Pinnacle Airlines of Memphis, Tenn., said the plane was new and had a clean safety record.

The pilot, Capt. Marvin Renslow, had been with the airline for nearly 3½ years and had more than 3,000 hours of flying experience with the carrier. The associate pastor at Renslow's church north of Tampa said in a statement on behalf of Renslow's family that the pilot died doing what he loved.

"They're very proud of Marvin's accomplishments as a pilot. They know that he did everything that he could to save as many lives as he could, even in the accident. Marvin loved to fly," said Alan Burner of the First Baptist Church of Lutz.

Among the 44 passengers killed was a woman whose husband died in the World Trade Center attacks of Sept. 11, 2001.

Flight 3407 is the first fatal crash of a commercial airliner in the United States since Aug. 27, 2006, when 49 people were killed after a Comair jetliner mistakenly took off from a Lexington, Ky., runway that was too short.

The crash came less than a month after a US Airways pilot guided his crippled plane to a landing in the Hudson River in New York City, saving the lives of all 155 people aboard. Birds had apparently disabled both its engines.

In general, smaller planes like the Dash 8, which uses a system of pneumatic de-icing boots, are more susceptible to icing problems than larger commuter planes that use a system to warm the wings. The boots, a rubber membrane stretched over the surface, are filled with compressed air to crack any ice that builds up.

A similar turboprop jet crash 15 years ago in Indiana was caused by icing, and after that the NTSB issued icing recommendations to more aggressively use the plane's system of pneumatic de-icing boots. But the FAA hasn't adopted it. It remains part of the NTSB's most-wanted safety improvements list.

Clarence is a growing eastern suburb of Buffalo, largely residential but interspersed with rural stretches. The crash site is on a street of older, single-family homes about 20 to 25 feet apart that back up to a wooded area. 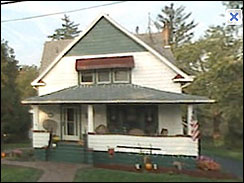 "Planes do go over our house, but this one just sounded really different, louder, and I thought to myself, 'If that's a plane, it's going to hit something,'" she told the station. "The next thing I knew the ceiling was on me."

She said she still hasn't been told the fate of her husband, Doug, but added: "He was a good person, loved his family."

While residents of the neighborhood were used to planes rumbling overhead, witnesses said it sounded louder than usual, sputtered and made odd noises.

"It didn't sound normal," said David Luce, who was at home with his wife when they heard the plane come in low. he said. "We heard it for a few seconds, then it stopped, then a couple of seconds later was this tremendous explosion."

Witnesses heard the plane sputtering before it plunged squarely through the roof of the house, its tail section visible through flames shooting at least 50 feet high.

Dworak told CBS' The Early Show the home that was hit was "one giant pile of debris on fire," adding that homes in the neighborhood are only 30-to-40 feet apart.

Continental said relatives and friends of those on Flight 3407 who want to give or receive information about those on board can call a special family assistance number, 1-800-621-3263.