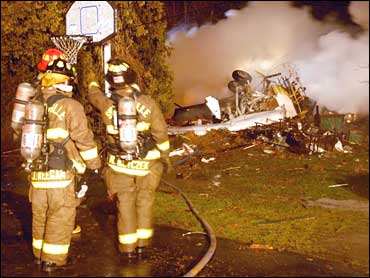 The National Transportation Safety Board has confirmed that investigators have located both black boxes, the data and in-flight voice recorders, from Continental Flight 3407 which crashed last night, killing 50.

They will then be sent back to the NTSB lab in Washington, D.C. for analysis.

A recording of communication between the doomed plane and the Buffalo, N.Y. airport suggests the pilot was calm just moments before the commuter plane crashed into a house, killing everyone on board and one in the Clarence, N.Y. home.

No mayday call came from the pilot before the crash, according to a recording of radio messages captured by LiveATC.net and posted on their Web site.

Whatever happened to this airplane, CBS News correspondent Nancy Cordes, reports, the crew must have had very little, if any, warning.

Neither the controller nor the pilot showed concern that anything was out of the ordinary as the airplane was asked to fly at 2,300 feet.

At the time of the last radio contact, the controller said the plane was three miles from a radio beacon that stands about four miles northeast of the airport.

The controller told the crew to turn the plane left to intercept a radio signal that would guide it to Runway 23. A female pilot aboard the plane calmly repeated the instructions back correctly.

Delta pilot: "Negative 1998, we're just in the bottoms and nothing on the TCAS (traffic collision avoidance system)."

After the crash, pilots flying at least two other planes are heard saying they have been picking up ice on their wings.

"We've been getting ice since 20 miles south of the airport," one says.

The Tower then asks authorities on the ground to investigate:

Tower: "You need to talk to somebody at least five miles north east, OK, possibly Clarence. That area right in there, Akron area. Either State police or Sheriff's department need to find out if anything is on the ground. This aircraft was five miles out, all of a sudden we have no response from that aircraft. ...

Tower: "All I can tell you is there is an aircraft over the marker and we're not talking to them now."

After the crash, at least two pilots were heard saying they had been picking up ice on their wings.

The Continental Connection flight was operated by Colgan Air. Pinnacle Airlines, the parent company of Colgan, said the pilot was Capt. Marvin Renslow, who joined Colgan Air in September 2005 and had flown 3,379 hours with the carrier.

The first officer was Rebecca Shaw, who joined Colgan last January and had flown 2,244 hours with Colgan.

Flight attendants were Matilda Quintero and Donna Prisco, who both began flying with Colgan in May.