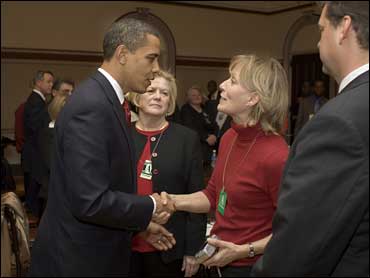 One of the victims of Continental Flight 3407, Beverly Eckert, was a Sept. 11 widow who put her never-ending grief to good use to make the country safer.

Just last week, Eckert was at the White House with Barack Obama, part of a meeting the president had with relatives of those killed in the 2001 attacks and the bombing of the USS Cole to discuss how the new administration would handle terror suspects.

"She was an inspiration to me and to so many others. I pray her family can find peace and comfort," the president said.

"She was such an important part of all of our work," said Mary Fetchet, another 9/11 family activist. She learned Eckert was aboard the plane from another close Eckert family friend now headed to Buffalo. Officials investigating the crash have not yet confirmed she was on board the plane.

Eckert, who was flying to Buffalo to celebrate what would have been her husband Sean Rooney's 58th birthday, was one of the most visible, tearful faces in the aftermath of the terror attacks.

She carried that grief to Congress as she tried to make the government do a better job protecting its citizens from terrorism.

Her husband worked at Aon Corp., a risk management firm, at the 98th floor of the World Trade Center's south tower.

She cried when she would tell the story about how her husband - who was her high school sweetheart - called her on the morning of the attacks, and told her he loved her just before there was a loud explosion and nothing more.

Eckert was part of a small group of Sept. 11 widows, mothers, and children who became amateur lobbyists, ultimately forcing lawmakers in 2004 to pass sweeping reforms of the U.S. intelligence apparatus.

They spent months walking the halls of Congress. All of the women were grieving, but Eckert seemed unable or uninterested in holding back her tears.

When it was over and they'd won passage of the intelligence reform law, Eckert vowed to quit her high-profile role "cold turkey." All she wanted, she said, was to go home, buy groceries, and return to something like a regular life.

"I did all of this for Sean's memory, I did it for him," she said, crying again. "There is a euphoria in knowing that we reached the top of the hill. ... I just wanted Sean to come home from work. Maybe now, someone else's Sean will get to come home."

Eckert was flying to her hometown Thursday night when the plane crashed on approach to the Buffalo airport.

Sixty-one-year old Douglas Wielinski was killed inside his home, reports Miller. His wife and daughter narrowly escaped. Friday night, a somber community gathered at local church to remember their neighbor and those lost on Flight 3407.

Other Known Crash Victims Of Flight 3407:

These names have been provided by airline officials, relatives or friends.