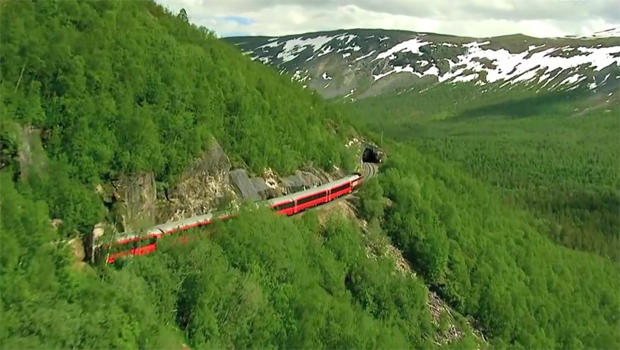 One axiom rarely observed on television nowadays is to "take it slow." And if you think that can't make for gripping TV, Seth Doane wants to tell you there's an entire country that would pointedly disagree:

It's called "Slow TV," and it's a surprising smash-hit in Norway.

It began with the broadcast of a train journey from the coastal city of Bergen to the capital, Oslo. The formula was simple: put a few cameras on a train and watch the scenery go by -- for seven hours.

Rune Moklebust and Thomas Hellum are the brains behind the whole thing.

"Did you know where this journey would lead, how successful it would be?" asked Doane.

"No idea at all," said Moklebust. "It's normally one of those ideas you get late night after a couple of beers in the bar, and when you wake up the next day, Ahh, it's not a good idea after all."

But much to their surprise, there was a green light from their bosses at Norway's public broadcaster NRK2.

"We actually like it being a bit strange and a bit crazy, because then it's more fun," said Moklebust.

Hellum added, "If the viewers laugh, or think, Wow, this is too crazy, that's basically the kind of reaction you really want from the viewers."

About a quarter of all Norwegians tuned in to watch some part of that train trip.

They ran historical clips when the train went through a tunnel, but other than some music, there was no narration, no plot, and -- thanks to public broadcasting -- no commercials.

Hellum admits his own show is boring. "Yes!" he laughed. "Much of life itself is boring. But in-between, there are some exciting moments, and you just have to wait for them."

Since the train, in 2009, they've experimented with other slow ideas, and folks at all levels have taken notice.

"I understand that in Norway, for example, one of the big hits on TV is National Firewood Night!" President Obama said at a State Dinner for the heads of five Nordic countries in May 2016. "This is true! Video of logs burning for hours."

Twelve hours in all!

A "National Knitting Night" started, of course, with shearing the sheep; knitting the sweater came much later in the 13-hour broadcast.

"Well, it has to be unique -- not a copy of the last one," said Moklebust. "So we have to push the boundaries for each show, I think."

The show titled "Salmon Swimming Upstream" ran 18 hours -- and afterward, the head of the station said it felt "too short."

So, is there a recipe for the perfect "Slow TV"? "It's important that it's an unbroken timeline, that you don't take away anything," said Hellum. "It's all the boring stuff in there, all the exciting things in there, so you as a viewer has to find out what's boring and what's interesting."

"It kind of requires you precisely to slow down, to kind of twist your head in a little bit of a different direction," said Espen Ytreberg, a professor of media studies at the University of Oslo.

Ytreberg said when he first heard about "Slow TV," he thought "the whole notion was weird, to tell you the truth. But it turned out that at least some of it I found surprisingly appealing."

Ytreberg likens Slow TV to opening a sort of window -- an escape valve -- from what he calls fast-paced, "eye-candy" TV. "When did we come to accept that television should be this accelerated, busy, intense, in-your-face-thing?" he said. "At some point, that became the norm."

"So suddenly, there comes a story out of it, and you have to see what happens."

There was plenty of time to follow that cow, because they came across it while shooting an episode, which followed a cruise along Norway's coast.

That cruise? Well, it was five-and-a-half-days long. Slow TV broadcast all 134 hours of it … live.

At one point almost half of Norway was watching.

Norwegians lined the ship's route, often waving flags or welcoming it in port.

And there were unexpected cameos:  A water skier in a mankini, for instance … even the Queen of Norway made a surprise appearance.

And the trip revealed some unexpected talent: Anna Bildstein-Hagberg, the purser on board, remembered how one night seemed a little quiet. "I just felt that, we need to rock 'n' roll a little bit."

So she picked up a microphone -- and became a breakout star! "Well, it wasn't meant like that!" she laughed.

"Slow TV" has been syndicated around the world and, since then, Bildstein-Hagberg gets recognized: "People from Australia come and just, 'It's you!'"

"Slow TV" episodes are special events; they're not on all the time. The creators want them to stand apart from regular programming.

All of this got us to thinking:

Doane showed Moklebust and Hellum one of "Sunday Morning"'s Moments of Nature which close each broadcast.

"And how many seconds do you dare to keep it?" Hellum laughed.

"Compared to other things, yes, definitely. And I guess you get a lot of good reaction on this one?"

"The audience loves the Moment of Nature, and they always want it to be longer."

"That means this piece has to be shorter, so watch it!" Doane laughed.