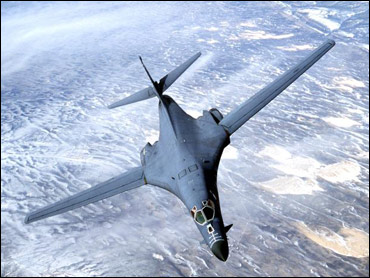 SEOUL, South Korea -- Two U.S. supersonic bombers flew over the Korean Peninsula for bombing exercises that are also a show of force against North Korea ahead of President Donald Trump's first official visit to Asia.

The U.S. Pacific Air Forces said in a statement that two U.S. Air Force B-1B Lancer bombers flew from Guam, were joined by Japanese and South Korean fighter jets, and "conducted a sequenced bilateral mission in the vicinity of the Korean peninsula, Nov. 2 (Korea Standard Time)." The statement confirmed that the warplanes flew over South Korea.

The drills simulated attacks on land targets, but didn't involve live weapons, said the official, who did not want to be named, citing office rules.

The North Korean nuclear threat will likely overshadow Mr. Trump's trip to Asia, which starts Sunday in Japan and will include stops in South Korea, China, Vietnam and the Philippines.

In recent months, North Korea has tested intercontinental ballistic missiles that could reach the U.S. mainland with further development and has conducted its most powerful nuclear test. It also flew powerful new midrange missiles over Japan and threatened to launch them toward Guam, the U.S. Pacific territory and military hub.

The United States has responded by sending its strategic assets to the region more frequently for patrols or drills. That has angered North Korea, whose foreign minister said in September the North had "every right" to take countermeasures, including shooting down the U.S. warplanes, though many experts doubt it has the actual intent or ability to do so.

"The U.S. imperialists are making last-ditch efforts to check the dynamic advance of the DPRK by deploying their nuclear strategic assets in succession, but its army and people are never frightened at such moves," the report said, referring to North Korea's official name, the Democratic People's Republic of Korea.