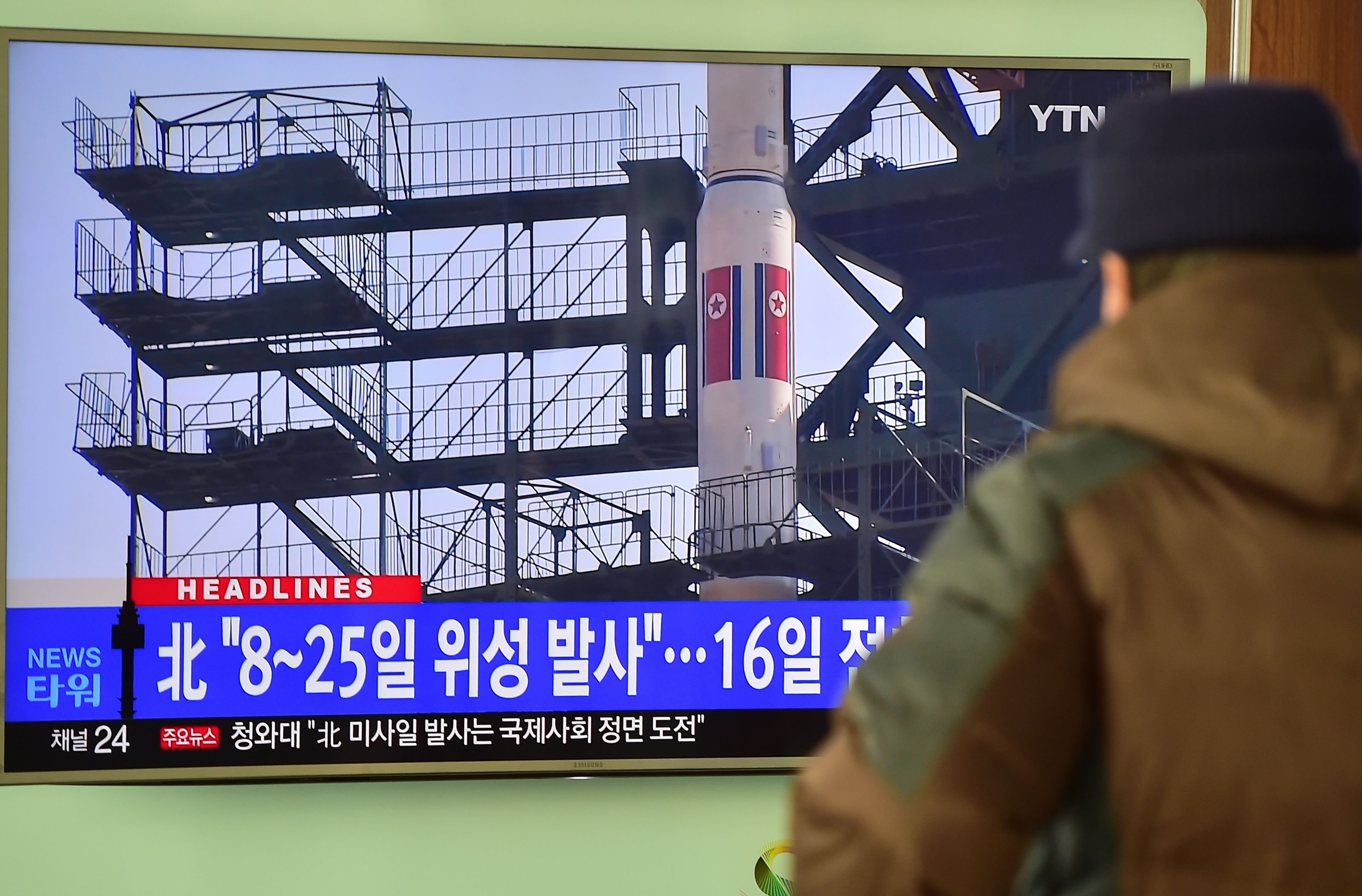 TOKYO -- Japan has deployed PAC-3 missile batteries in the heart of Tokyo to shoot down any incoming rocket debris. South Korea is reportedly mobilizing two Aegis-equipped destroyers. The U.S. is already gunning to punish Pyongyang for what it says will be a ballistic missile test in the guise of a space launch.

The unnamed U.S. official as saying the North would "finish preparations for the launch as soon as the next several days."

North Korea informed international agencies last week that it was planning to conduct the launch -- which it insists is to put a satellite in space and has nothing to do with its missile program -- between Feb. 8 and Feb. 25.

Whatever lifts off from North Korea's western coast space center this month, one thing is certain -- since rockets and missiles inevitably have overlapping technologies, it will run afoul of U.N. resolutions that have been in place for years to bar North Korea from testing any technology that could be used to develop long-range ballistic missiles.

But maybe it's time to take a deep breath.

According to many experts, the North's rockets look a lot more like what the North says they are - space launch vehicles, or SLVs -- and they aren't necessarily helping Pyongyang get that much closer to having a reliable, long-range missile capable of dropping a nuclear weapon on the United States any time soon.

"What is needed now is a sober, serious, and reasonable public assessment of the threat from North Korea," said Ted Postol, a professor of science, technology and national security policy at the Massachusetts Institute of Technology and a former scientific adviser to the Chief of Naval Operations at the Pentagon.

Less than a month after testing what it claimed was its first hydrogen bomb, North Korea earlier this week informed international organizations it is planning to launch an Earth observation satellite sometime in the aforementioned two-and-a-half-week time window. It also announced "drop zones" -- areas mostly over the ocean where debris from the rocket's stages is likely to fall -- that suggest a similar trajectory, and probably a similar or slightly larger rocket, to the Unha-3 that was launched in 2012.

The launch plan has been strongly denounced by North Korea's neighbors, including China and Russia, the U.N. secretary general and the United States.

But Postol and other experts who spoke to The Associated Press say the devil is in the details.

The distinction between a rocket used to lift a satellite into space and a long-range ballistic missile is highly technical but of crucial importance to understanding North Korea's motives and capabilities and in forming a realistic and effective strategy to deal with them. It is also crucial to understand the limitations of what space rocket launches contribute to the North's ability to develop military-use missiles.

According to some, that isn't necessarily very much.

"A real ICBM is a weapon system that has to hit a given target on the other side of the world, being launched at any condition with the push of a button almost instantly," said Markus Schiller, a prominent expert on North Korean missile technology and founder of Munich-based ST Analytics. "Just launching a small satellite carrier every other year, which uses different technology than required for a real ICBM, does not get you much closer to this goal."

"They gain experience by launching a large rocket like Unha," said Schiller. "But this is just one minor of so many steps required for a real ICBM, and the Unha is definitely designed as a satellite launcher."

David Wright, co-director and senior scientist with the Global Security Program of the Union of Concerned Scientists, also warned against quickly dismissing Pyongyang's space launches as a smoke screen.

"While launching satellites helps North Korea learn about rocket technology, I think its desire to launch satellites is real," he said. "This is partly for prestige, and it was of course a huge deal that it put something into orbit before South Korea. But I think, like other countries, it sees learning how to use space for various activities as an important long-term capability."

None of this means the threat of North Korea developing advanced ballistic missiles is a mirage.

South Korean officials also believe that beginning in 2007, the North has been deploying 1,864-mile-range missiles, which foreign analysts have dubbed Musudan after the name of the village near its test site. That would theoretically put locations as far as Guam and parts of the Philippines within striking distance.

Even more advanced is the three-stage Taepodong-2 missile, which Seoul claims the North deployed after a test-firing in 2006. It has an estimated range of 6,214 miles, bringing North's best-case scenario range out to the U.S. West Coast, Hawaii, Australia and Eastern Europe, according to the South's Defense Ministry.

The basic structure of the Taepodong-2 is quite similar to the Unha-3 rocket. But even South Korean experts say an Unha-3-type rocket would make for a poor intercontinental ballistic missile because of the time needed for launch preparation and the requirement for it to be fired from a fixed launch site.

Alison Evans, senior analyst of IHS Country Risk, argued in a recent assessment that if the North is seriously pursuing an ICBM, its next step is to prove that its SLVs are capable of carrying a payload that can re-enter the atmosphere, a key capability for ballistic missiles - which, after all, must hit targets on the ground. That has not so far been part of any of North Korea's space launches.

But the focus on whether the North's space launch rockets are really missiles or, even if they aren't, that each launch brings the North closer to having an ICBM may be misguided.

"There is no doubt that the leadership in North Korea presents a very serious threat to South Korea, Japan, and China," said Postol, the MIT scientist. But he added that the common reaction abroad to the North's rocket launches has been "severely inflated" and has become "a distraction from the real and serious security problems that North Korea creates."

He believes a "very good argument can be made" that if North Korea were to launch a nuclear-armed ballistic missile attack on the mainland of the United States, it wouldn't come from an ICBM at all, but from submarine launched ballistic missiles, which can be deployed in a far more stealthy manner and have relatively short flight times.

"If North Korea uses these submarines in ways that keep them in coastal waters, anti-submarine warfare will be almost useless against them," he said. That's because shorter-range nuclear-tipped missiles launched from submarines closer to shore would be difficult or impossible to intercept with the kind of booster-phase defenses the U.S. and others rely on.

"So if I were betting on a bad outcome in the future, my bet would be on a future North Korean SLBM and a future nuclear warhead that could be carried by it," Postol said.

He said he expects this kind of a threat to emerge from North Korea in the next five years.

"But I have serious doubts about whether North Korea will be able to build a compact nuclear warhead that is sufficiently rugged to be mounted on such missiles," he added. "If these two guesses are correct, North Korea will continue being not much more than a paper tiger. If not, we are in for real trouble."