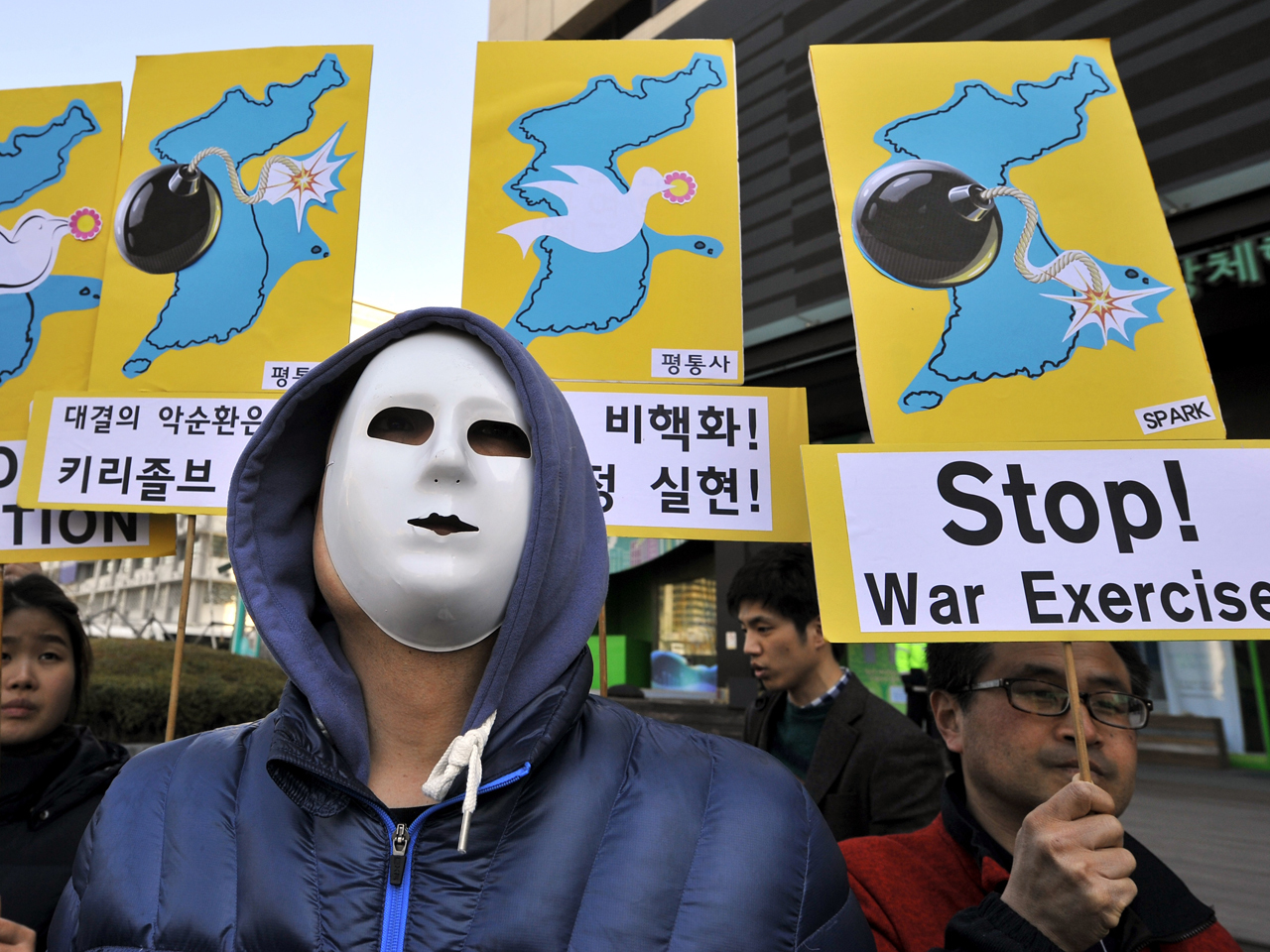 SEOUL, South Korea South Korea and the United States began annual military drills Monday despite North Korean threats to respond by voiding the armistice that ended the Korean War and launching a nuclear attack on the U.S.

After the start of the drills, South Korean officials said their northern counterparts didn't answer two calls on a hotline between the sides, apparently following through on an earlier vow to cut the communication channel because of the drills.

Japanese media were citing a story in the Monday edition of North Korea's ruling party newspaper as saying the armistice is no longer in effect.

Anti-war demonstrators turned out near the U.S. Embassy in the South Korean capital of Seoul to protest the start of the drills.

Pyongyang had launched a bombast-filled propaganda campaign against the drills, which involve 10,000 South Korean and about 3,000 American troops, and against last week's U.N. vote to impose new sanctions over the North's Feb. 12 nuclear test. Analysts believe much of that campaign is meant to shore up loyalty among citizens and the military for North Korea's young leader, Kim Jong Un.

Pyongyang isn't believed to be able to build a warhead small enough to mount on a long-range missile, and the North's military has repeatedly vowed in the past to scrap the 1953 armistice. North Korea wants a formal peace treaty, security guarantees and other concessions, as well as the removal of 28,500 U.S. troops stationed in South Korea.

Still, South Korean and U.S. officials have been closely monitoring Pyongyang's actions and parsing the torrent of recent rhetoric from the North, which has been more warlike than usual.

North Korea regularly claims South Korea-U.S. drills are a preparation for invasion, but Pyongyang has signaled more worry about the drills that began Monday. The drills follow U.N. sanctions that the North says are the result of U.S. hostility aimed at toppling its political system.

North Korea has also warned South Korea of a nuclear war on the divided peninsula and said it was cancelling nonaggression pacts.

Under newly inaugurated President Park Geun-hye, South Korea's Defense Ministry, which often brushes off North Korean threats, has looked to send a message of strength in response to the latest threats. The ministry warned Friday that the North's government would "evaporate from the face of the Earth" if it ever used a nuclear weapon. The White House also said the U.S. is fully capable of defending itself against a North Korean ballistic attack.

North Korea has said the U.S. mainland is within the range of its long-range missiles, and an army general told a Pyongyang rally last week that the military is ready to fire a long-range nuclear-armed missile to turn Washington into a "sea of fire."

While outside scientists are still trying to determine specifics, the North's rocket test in December and third atomic bomb test last month may have pushed the country a step closer to acquiring the ability to hit the U.S. with weapons of mass destruction. Analysts, however, say Pyongyang is still years away from acquiring the smaller, lighter nuclear warheads needed for a credible nuclear missile program.

Both incidents occurred near the disputed western sea boundary, a recurring flashpoint between the Koreas that has seen three other bloody naval skirmishes since 1999.

Kim Jong Un visited two islands just north of the sea boundary last week and ordered troops there to open fire immediately if a single enemy shell is fired on North Korean waters. Kim was also quoted as saying his military is fully ready to fight an "all-out war" and that he will order a "just, great advance for national unification" if the enemy makes even a slight provocation, according to the North's official Korean Central News Agency.

Despite the threats, South Korea and the U.S. began the 11-day war games as scheduled Monday. The allies have repeatedly said the drills and other joint exercises are defensive in nature and they have no intention of attacking the North.

A U.S. military statement said the exercise is not related to current events on the Korean Peninsula.

The drills are part of larger war games that began March 1 and are set to go on for two months.

U.S. troops in South Korea are meant to prevent North Korean aggression, U.S. and South Korean officials say, and are a legacy of the Korean War, which ended with an armistice that leaves the Korean Peninsula still technically in a state of war.