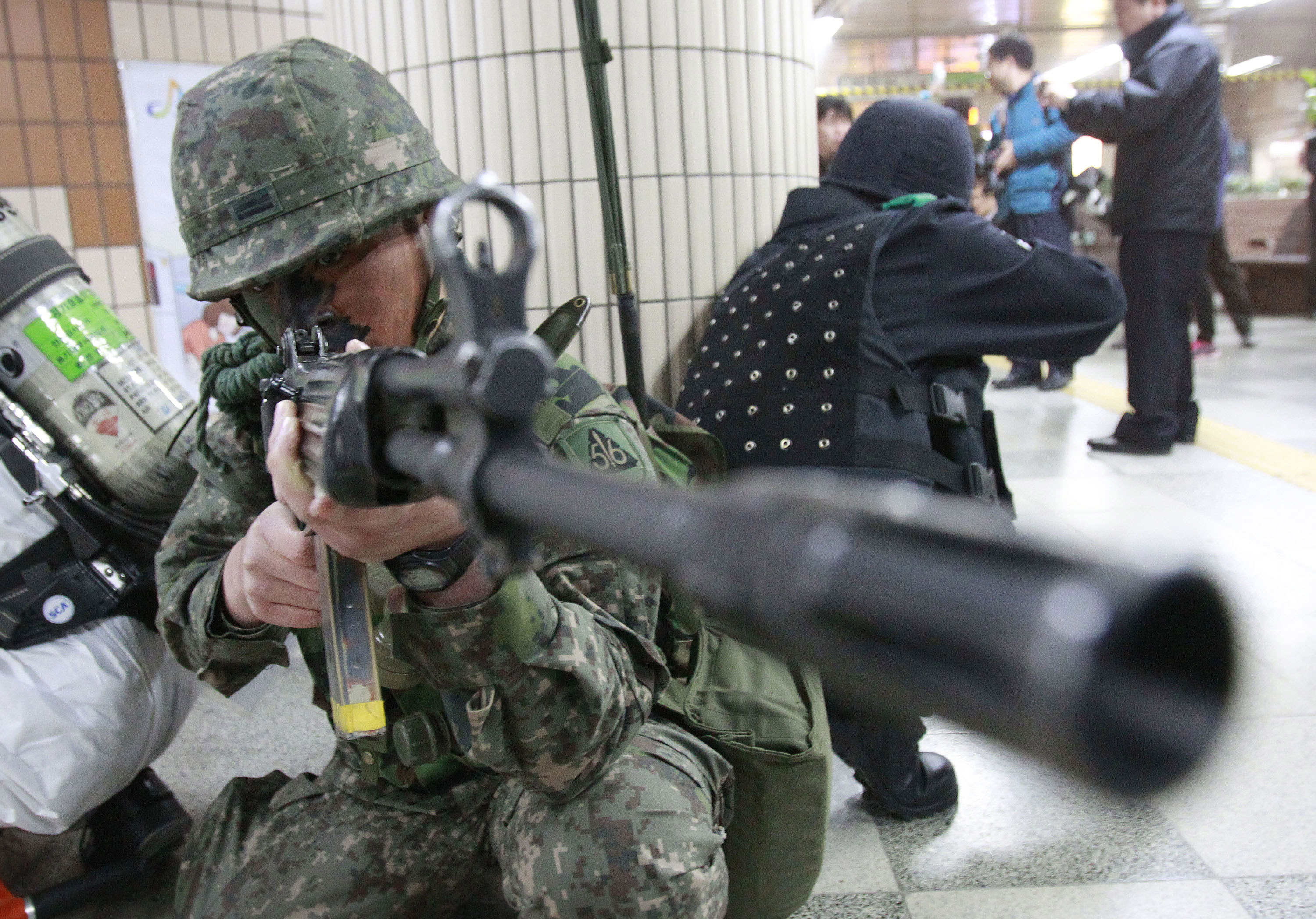 PYONGYANG, North Korea North Korea said it was open to talks, but not as long as the United States is "brandishing a nuclear stick," while Washington insisted that the burden for renewed negotiations now rests with Pyongyang.

North Korea also warned that it will intensify unspecified "military countermeasures" unless the U.S. stops conducting military drills on the peninsula and withdraws the military assets that Pyongyang says threaten the North with a nuclear attack.

The statements Tuesday came amid international fears that the North is preparing to conduct a medium-range missile test and also as North Korea marked the second day of festivities in honor of the April 15 birthday of its first leader, Kim Il Sung.

The renewed vitriol began after a Monday protest by about 250 people in downtown Seoul, where effigies of Kim Il Sung and his late son and successor, Kim Jong Il, were burned. Such protests are fairly common in South Korea, and though Monday's was held on the holiday that North Korea calls "The Day of the Sun," some analysts suggested North Korea was using it as a pretext to reject calls for a dialogue with the South, at least for the time being.

North Korea often denounces protests like the one held Monday, but this time responded with a statement from the Supreme Command of the Korean People's Army, which is headed by Kim Il Sung's grandson and North Korea's overall leader, Kim Jong Un.

The North's statement said it would refuse any offers of talks with the South until it apologized for the "monstrous criminal act."

"If the puppet authorities truly want dialogue and negotiations, they should apologize for all anti-DPRK hostile acts, big and small, and show the compatriots their will to stop all these acts in practice," the statement said. North Korea's official name is the Democratic People's Republic of Korea, or DPRK.

Later in the day, its state media quoted a Foreign Ministry spokesman saying North Korea has no intention of holding talks with the U.S. unless it also abandons its hostility against the North.

North Korea is not opposed to dialogue but has no intention of "sitting at the humiliating negotiating table with the party brandishing a nuclear stick," the statement said.

"They know what they need to do in terms of stopping their provocations and showing a seriousness of purpose, and so they know what's required of them," he said.

U.S. Secretary of State John Kerry said during a recent trip through Asian capitals that a North Korean missile test would be a provocation that would further isolate the country and its impoverished people. He said Sunday that the U.S. was "prepared to reach out," but that Pyongyang must first bring down tensions and honor previous agreements.

This year's festivities in honor of Kim Il Sung's birth were mostly low key, with Pyongyang residents gathering in performance halls and plazas and taking advantage of subsidized treats, like shaved ice and peanuts. Last year's anniversary — the birth centennial — was marked with days of immense festivities and a massive military parade.

Instead of such grandiose events, the front page of the Rodong Sinmun, the Workers' Party newspaper, on Tuesday featured photos of Kim Jong Un at an orchestral performance with his aunt, Kim Kyong Hui, and other top officials. North Korean media also reported that he watched volleyball and basketball games between Kim Il Sung University of Politics and Kim Il Sung Military University.

After Pyongyang's latest volley of rhetoric, South Korean Defense Ministry spokesman Kim Min-seok said South Korea was closely monitoring its moves and would "thoroughly and resolutely punish North Korea if it launches any provocation for whatever reason."

The calm over the past two days in Pyongyang has been a striking contrast to the steady flow of retaliatory threats North Korea has issued over ongoing military exercises between South Korea and the United States. Though the maneuvers, called Foal Eagle, are held regularly, North Korea was particularly angry that this year they included nuclear-capable B-2 stealth bombers and F-22 fighters.

"The ultimatum is just North Korea's way of saying that it's not willing or ready to talk with the South," said Chang Yong-seok at the Institute for Peace and Unification Studies at Seoul National University. "North Korea apparently wants to keep the cross-border relations tense for some time to come."

To further coordinate their response, South Korea's new president, Park Geun-hye, will meet with President Barack Obama on May 7 at the White House.

The U.S.-South Korean military drills are scheduled to end April 30. On Tuesday, a Marine CH-53E helicopter made a "hard landing" during the exercises, according to a statement from United States Forces Korea. Twenty-one personnel were on board the helicopter, including five crew members, the statement said. All were taken to the hospital, but 15 were quickly released. The remaining six were in stable condition.

North Korea has also pulled its workers from a joint factory complex on its side of the heavily armed border — the last remaining symbol of inter-Korean complex. Pyongyang has also barred South Korean managers from traveling to the complex, though it hasn't forced South Koreans to leave.

About 200 South Koreans remain inside Kaesong. Some recently told The Associated Press they were subsisting on instant noodles.

Ten South Koreans from the South Korean companies working in Kaesong hoped to visit the park Wednesday to relay their worries to the North and pass along food and other necessities to their colleagues still living inside. But the North again refused to allow them to cross the border, citing the current tension, according to South Korea's Unification Ministry.