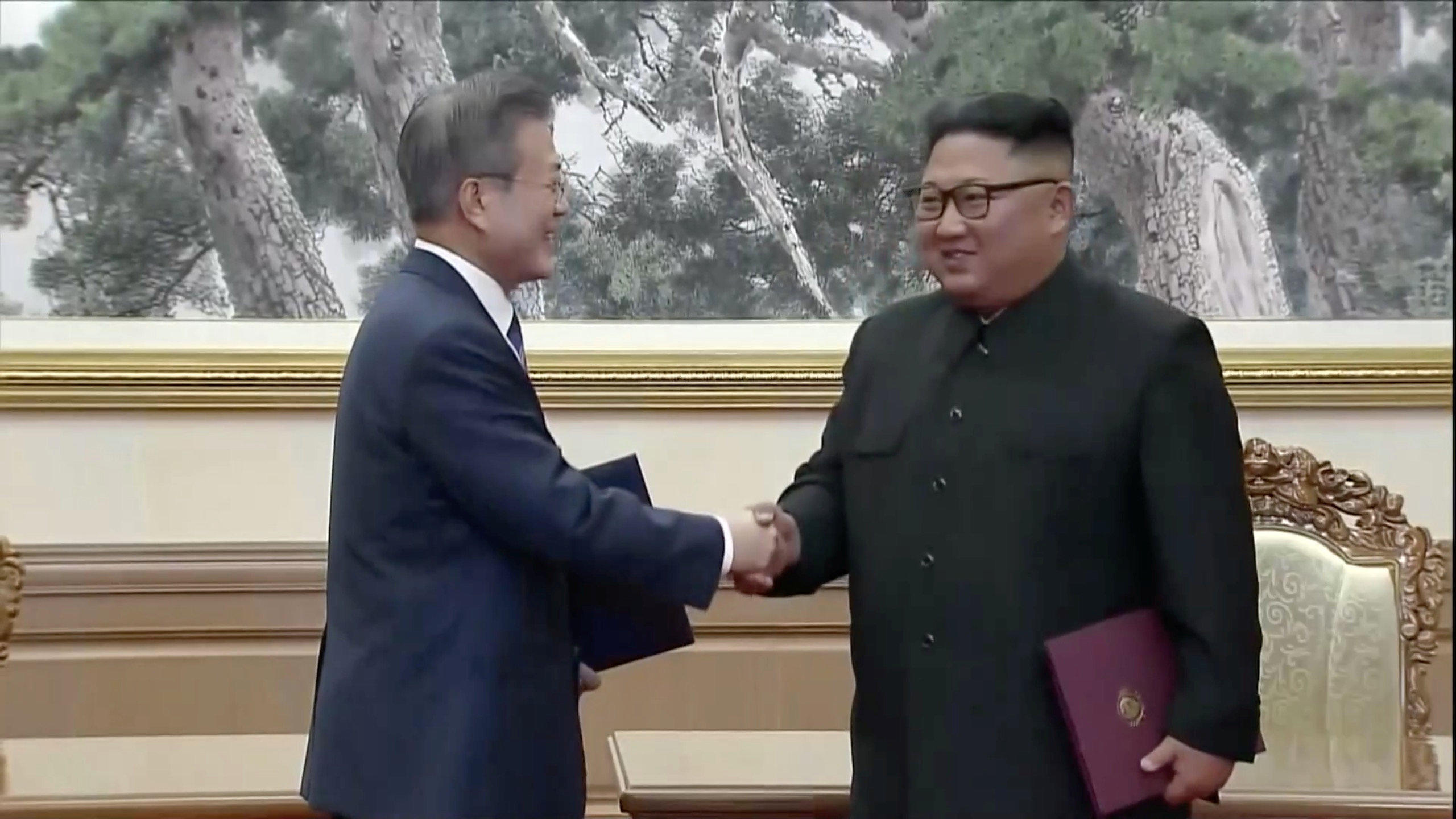 PYONGYANG, North Korea -- South Korean President Moon Jae-in and North Korean leader Kim Jong Un announced a sweeping set of agreements after their second day of talks in Pyongyang on Wednesday. The pact included a promise by Kim to permanently dismantle the North's main nuclear complex if the United States takes corresponding measures, the acceptance of international inspectors to monitor the closing of a key missile test site and launch pad and a vow to work together to host the Summer Olympics in 2032.

Declaring they had made a major step toward peace on the Korean Peninsula, the two leaders were side by side as they announced the joint statement to a group of North and South Korean reporters after a closed-door meeting Wednesday morning.

As CBS News correspondent Ben Tracy reports, the two leaders agreed to quite a bit -- the question now is how much of it will actually happen -- and will the U.S. go along with it.

"We have agreed to make the Korean Peninsula a land of peace that is free from nuclear weapons and nuclear threat," Kim said as he stood by Moon's side at the guesthouse where Moon is staying. "The road to our future will not always be smooth and we may face challenges and trials we can't anticipate. But we aren't afraid of headwinds because our strength will grow as we overcome each trial based on the strength of our nation."

Kim and Moon earlier smiled and chatted as they walked down a hallway and into a meeting room to finalize the joint statement, which also said that the leaders would push for a Korean Peninsula without nuclear weapons and to "eliminate all the danger of war." They agreed that Kim would visit the South in the near future.

The statement caps off the third summit between Kim and Moon, who is under increasing pressure from Washington to find a path forward in its efforts to get Kim to completely -- and unilaterally -- abandon his nuclear arsenal.

But while containing several tantalizing offers, it appears to fall short of the major steps many in Washington had been looking for -- such as a commitment by Pyongyang to provide a list of the North's nuclear facilities, a solid step-by-step timeline or an agreement to allow international inspectors in to assess progress or discover violations.

In this latest declaration North Korea agrees to permanently shutter its main missile engine testing site and launch pad. The site is where the North has tested several of its intercontinental ballistic missiles, Tracy reports, and what's significant is that Kim now says he'll allow outside experts to come in and verify that he has actually dismantled it.

But it remains unclear what steps Kim is hoping the U.S. government will take before he moves forward with the dismantling of the Yongbyon Nuclear Scientific Research Center, the isolated nation's primary nuclear facility. The U.S. government has been adamant, thus far, that any meaningful sanctions relief or an official declaration of the end of the Korean War -- both key objectives for Kim's regime -- can only come after denuclearization is verified.

The question is whether the agreements made at the Pyongyang summit will be enough for President Donald Trump to pick up where Moon has left off.

Mr. Trump has maintained that he and Kim have a solid relationship, and both leaders have expressed interest in a follow-up summit to their meeting in June in Singapore. North Korea has been demanding a declaration formally ending the Korean War, which was stopped in 1953 by a cease-fire, but neither leader mentioned it as they read the joint statement.

In the meantime, however, Moon and Kim made concrete moves of their own to reduce tensions on their border.

According a joint statement signed by the countries' defense chiefs, the two Koreas agreed to establish buffer zones along their land and sea borders to reduce military tensions and prevent accidental clashes. They also agreed to withdraw 11 guard posts from the Demilitarized Zone by December and to establish a no-fly zone above the military demarcation line that bisects the two Koreas that will apply to planes, helicopters and drones.

With the main business of the day over, North Korea was expected to hold a huge mass games spectacle in the evening, with Moon as the special guest.

The North had put the iconic games, which feature tens of thousands of performers dancing and flipping placards in unison to create giant mosaics and slogans, on a back burner for the past several years, but revived them for this month's celebrations of its 70th founding anniversary. In a performance for the anniversary, a giant photo of Moon and Kim shaking hands at their first summit in April was projected onto one side of the stands in Pyongyang's 150,000-seat May Day Stadium.

Kim has gone all out to make Moon's visit a memorable one.

On Tuesday, the first day of the summit, he greeted Moon and his wife at Pyongyang's airport and then rode into town with Moon in an open limousine through streets lined with crowds of North Koreans, who cheered and waved the flag of their country and a blue-and-white flag that symbolizes Korean unity.

The summit talks began at the ruling Workers' Party headquarters where Kim and Moon were joined by two of their top deputies - spy chief Suh Hoon and presidential security director Chung Eui-yong for Moon, and for Kim, his sister, Kim Yo Jong, and senior Workers' Party official Kim Yong Chol, according to Moon's office.

At the start of their meeting Tuesday, Kim thanked Moon for brokering the June summit with Trump.

"It's not too much to say that it's Moon's efforts that arranged a historic North Korea-U.S. summit. Because of that, the regional political situation has been stabilized and more progress on North Korea-U.S. ties is expected," Kim said, according to South Korean media pool reports and Moon's office.

Moon responded by expressing his own thanks to Kim for making a "bold decision" in a New Year's speech to open a new era of detente and send a delegation to the South Korean Winter Olympics in February.